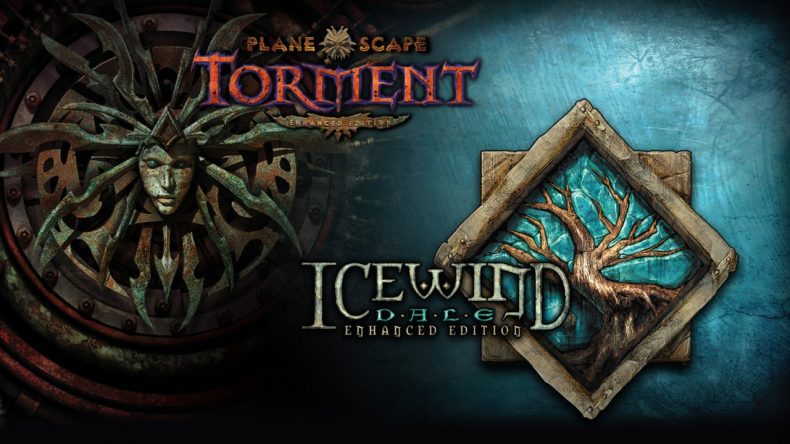 Dungeons & Dragons has come back in a big way over the past few years. With the likes of Hollywood stars Vin Diesel and Joe Manganiello publicly declaring their love for the game, to online series like Matt Mercer’s Critical Role adding real drama and entertainment to campaigns, it just seems like the right time for Beamdog to bring its Enhanced Editions of PC classics Planescape: Torment and Icewind Dale back into the limelight. Bundling these two games together potentially means hundreds of hours of gameplay in one package; two huge RPGs that, along with Baldur’s Gate, helped pave the way for the existence of titles like Knights of the Old Republic, Divinity: Original Sin 2, and Pillars of Eternity.

They weren’t easy games, though. When they were released around two decades ago (Planescape was 1999 and Icewind Dale, 2000) games were nowhere near as accessible as they are now. That’s not to say they weren’t as good. In fact, these two games are among the best of their kind, still renowned for their storytelling and gameplay. The Enhanced Editions have been remade and reworked by Beamdog to offer a more accessible and fun adventure for today’s gamer. Among the various difficulty levels (including the core ruleset for those wanting the original D&D 2nd Edition experience) there is a new Story mode in Icewind Dale, which offers the full game with all its combat and exploration, but removes the ability to actually die. It makes you stronger and enemies weaker, but much like the recent Switch re-releases of the PlayStation Final Fantasy games, it offers an extra degree of accessibility so that anyone and everyone can enjoy the game. It’s great for returning players too, who just want to enjoy the story again without going through the challenge of their original playthrough. Of course, you can still whack the difficulty up beyond the original games’ settings, if you want to. Icewind Dale was my first destination in this new double pack. It begins with the tale of Jerrod, a barbarian shaman who sacrificed himself to save Icewind Dale from a demonic invasion, before the game settles on the village of Easthaven and your little band of adventurers. Unlike most RPGs, this game gives you a full set of characters from the start, rather than setting off alone and then meeting others to complete your party along the way. You can set off with a preset party or create your own, based on your own preferences. It’s a Dungeons & Dragons game, after all, where player choice has always been key to the experience.

I love that Icewind Dale is built on fantasy clichés, with your party starting out in a tavern, gathering information from the barkeep and patrons about what’s going on in the area. There’s a man named Hrothgar who’s setting up an expedition to the nearby town of Kuldahar, which triggers events that begin the story proper. Before you leave however, there are various people and quests in Easthaven, designed to show you the ropes. For example, there is a woman on the edge of town who’s unable to speak except in song. My barbarian party leader couldn’t understand and became frustrated, his available responses mostly threatening violence. However, switching control to my bard, she could play a song in return, leading to new conversation options and the ability to pursue a new quest. Not everything can be solved by your party leader in these games, because each character in your team has their own abilities, especially when it comes to conversation.

Those individual abilities come in handy during combat, too. Managing your party during battle is important, making use of the pause function to move them around and coordinate their attacks. Thieves can make use of stealth to slink through the shadows and flank enemies, mages can use spells to control the flow of a fight, and berserkers can use their rage to deal extra damage, though you might need to keep an eye on them afterward. It’s very easy to lose control of a battle though, as you can easily become overwhelmed and you’re at the mercy of hidden dice rolls, in keeping with the D&D ruleset, which can be a little frustrating at first. The good thing about all this is, when you switch to Planescape: Torment, the gameplay and systems are near identical. Control schemes are mostly shared across both games, so you won’t find yourself struggling to remember how to play, if you’re playing both games simultaneously.

The first thing you may notice about Planescape is that its intro movie looks very much like a 1999 CG intro. I mean, it is a 1999 CG intro, but one that has aged poorly. Whereas Icewind Dale opted for narration over still images, the 3D animation of Planescape just looks incredibly dated. Thankfully, its message and the way the story opens, have no such issue.

You are the Nameless One, beginning your story by waking up in a mortuary, thought dead by those bringing you in. Or maybe they were the ones that killed you? Amnesia means you don’t know how you died, or even who you are, hence the whole “Nameless One” moniker. You are greeted by a floating skull named Morte, who decides to aid your escape and accompany you on your quest to discover who you are. His dry humour is always entertaining, and that’s where Planescape: Torment differs from other games from this D&D era. It has its serious moments, but there is a lot of cynical humour beneath it all, which shines through in the magnificent writing. Its setting is incredibly different, too. This is no sword and sorcery tale, and Kansas has gone bye-bye because the usual rules don’t apply. There are strange creatures to talk to, there are different planes of existence and, well… you start off literally waking from death. It’s a long way from the accessibility of Icewind Dale, which is a little jarring. There is no Story difficulty in Planescape: Torment, and even on its easiest setting, newer players will struggle. This isn’t helped by the glacial pacing of the to-ing and fro-ing in the first few hours, not to mention the number of times you’ll be attacked and have to rely on the RNG of the hidden dice rolls. I lost count of the number of fights that I got into, watching failed attack after failed attack, listening to the swish of missed swings, all the while getting the snot beaten out of me. Barely escaping with my life, is apparently my thing.

It’s baffling really, how this package can offer two games that are so similar, yet feel so different in terms of accessibility. Of course, purists and fans of the originals can get the same experience they had 20 years ago, but why make only one half of this package appeal to a wider audience? Why share the controls across both games, but not share the same difficulty options?

Having said all that, Icewind Dale and Planescape: Torment are still great games. They may not exactly look as amazing as they did back when they were first released, and they may be inexplicably lacking touchscreen support on Switch, but these Enhanced Edition re-releases work surprisingly well on console using a controller (or the Joycons on Switch). You might just need a lot of patience to play one of the games, but you’ll certainly need a lot of time to play both of these epic RPGs. And honestly, you probably should play them.

This is a great port of two very influential western RPGs, though newcomers may be put off by the old school design.