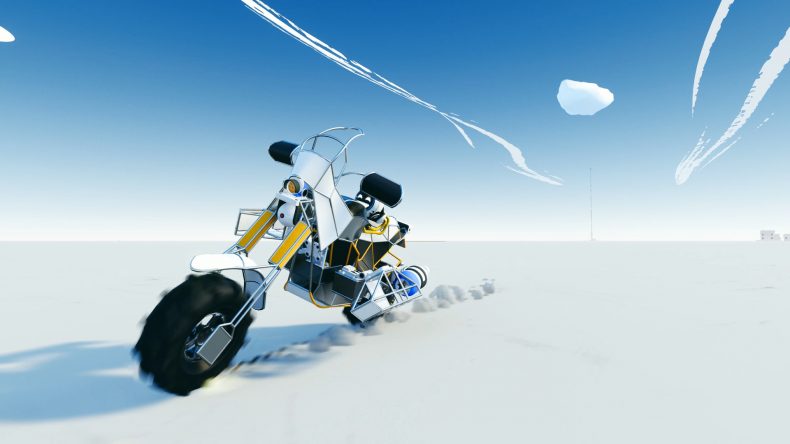 Which is where Main Assembly comes in.

You begin as a drone, a simple floating orb with expressive digital eyes that reminded me of Eve from WALL.E. Your drone has the ability to build vehicles and robots, with the only limit being your imagination. Well, that and how many new parts you’ve unlocked. But…video games, you know? There’s a nice sense of humour and general fun running throughout Main Assembly, with the tutorials offering a few smiles as the GLaDOS-like voiceover talks you through the basics of vehicle creation. Each tutorial (and indeed, the challenge levels) come with objectives, some optional, which earn you stars for unlocking more content. The optional objectives often task you with knocking over crash dummies that are scattered around the area, and driving into them results in humorous quips as they crumple to the floor, or into an abyss.

But what is Main Assembly? It’s essentially a creative puzzle sandbox, but with an emphasis on imagination and logic, not to mention simply having fun. You’ll be given objectives within a level and you will have to build a vehicle to complete those objectives. Aside from having to unlock certain parts, you’re not really limited to any particular vehicle designs. They don’t even have to be ground vehicles, should you have the imagination and ability to create something that flies. You can constantly rebuild, reshape and modify your creation as you play, which may help in completing an objective or reaching an unlockable item.

The building itself is as simple or complicated as you want it to be. You might start with a basic cube, but clicking and dragging the mouse on one side can extend it, or moving the corners/edges can reconfigure it into weird and wonderful shapes. The first thing I did was create something akin to a Formula One car, which was great on the race track map, but way too light to turn quickly on any form of bumpy terrain. Admittedly, it was funny to watch it tip over and roll the first time I tried. Within the building menu, however, there are thrusters and propellers, which you can use to create all manner of crazy machines. Or you can simply use thrusters to create an upward boost, allowing your little vehicle to jump. The physics could use a little work, it must be said. I lost count of how many times my vehicle bounced off in random directions, or almost did a one-eighty whenever something went slightly wrong, with no way to correct it. Main Assembly has that kind of over-light, almost cartoon level of physics which can, at times, feel totally at odds with a physics-based game like this. Thankfully, you can easily jump out of your creation at any time and flip it back upright, or immediately refine your design before reprinting it at the starting area. It won’t reset the level progress, so you can go back in and try again with your updated vehicle.

The building itself can be a little awkward sometimes, as moving various nodes and extending sections will change depending on the angle from which you’re viewing it. It becomes fiddly and results in your intended changes going wrong, but again, where Main Assembly helps to keep things relaxed, is in the ability to undo anything in the building process. A quick press of Ctrl+Z will get rid of that cock-up, allowing you to reposition the camera and take another shot at building whatever your mind envisions. Or a close approximation, at least. The only thing that has the potential to become overwhelming is the depth of Main Assembly’s creative options. Much like Kerbal Space Program, there are real physics systems to consider when building more complex machines. You can’t just stick a propeller on your design and start flying, you’ll only end up like a deflating balloon, uncontrollably zipping around until you hit the ground. Only a balloon doesn’t explode on impact. I wasn’t forced to deal with anything like this during my time with the Main Assembly beta, but it may happen further down the line. Hopefully the game will take the time to teach players what they need to know, should that happen. I mean, I know I have no idea how gyroscopes work, I don’t know about you.

Puzzle games often stress me out, but in Main Assembly I’ve found a game that has the potential to be an incredibly chilled experience. While it isn’t a puzzle game in the same vein as Filament or The Witness, there’s still a nice sense of accomplishment when you work out how to refine your creation to reach an objective, or when you’ve managed to earn all the stars on a level. Sometimes it’s just fun to jump into Sandbox mode and play around with ideas, saving any creations you like and think might be useful in the main game.

However I spent my time in Main Assembly’s beta, I always had fun. And sometimes, it’s nice to just play something fun.