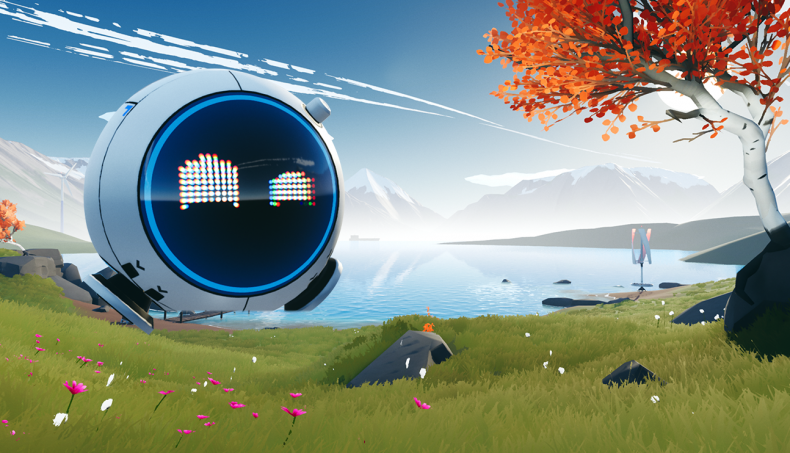 Games that encourage creativity are an excellent thing. Just look at the way Minecraft has evolved into something that is used as a teaching tool, on top of its normal creative potential. LittleBigPlanet saw creations that went well beyond what people thought possible within those games, eventually informing Media Molecule’s development of Dreams. Again, another game that has already produced results beyond expectations. The latest of these kinds of games is Main Assembly, which tasks players with building vehicles and machines to solve puzzles of varying difficulty.

You start off with a drone that looks not dissimilar to Eve from WALL.E, or even Cozmo, the programmable, interactive robot. Which you can dress up in silly costumes, if it wasn’t already cute enough. You’ll be taught how to build vehicles by a disembodied voice that sounds a little like GLaDOS, beginning with the simple stuff like putting the wheels on and learning how to make them work. You’ll learn how to manipulate the various parts of the chassis in order to turn it into your own creation, but it’s likely you’ll be starting off with a simple, 4-wheeled vehicle. Only through unlocking new parts and experimenting within the various levels and maps, will you really start to see the potential in Main Assembly. Quite soon, however, you do discover that its cartoon physics sometimes gets in the way of completing your objectives. No matter the weight of your vehicle, it often bounces around and flips over in what is initially comic fashion, but soon develops into an irritation when no amount of tinkering stops the flipping and rolling. It soon gets tiresome, having to get out of the vehicle and slowly flip it back onto its wheels.

This lack of weight pervades the entirety of Main Assembly, providing the game with its biggest stumbling block. Very early in the challenge levels, you’re tasked with avoiding shots from (literally) laser-guided basketball cannons, as well as rotating bumpers and other obstacles. The game even advised using strong materials to protect my vehicle, which I did, only for it to be continuously sent rolling and bouncing with every impact. Sure, the metal didn’t break as easily as the standard materials, but that doesn’t help me when I’m being knocked around like a pinball. Considering how early this is in the game, I couldn’t help but feel that this was an issue.

I felt unprepared, possibly because the tutorial only really covers the absolute minimum when it comes to building. Perhaps this is to encourage experimentation, but considering the depth of the potential here, a few extra lessons would not go amiss. Even optional ones, for players like myself that may need a bit more guidance at times. I do think that Main Assembly is a great idea, it should be said. It mixes the ridiculous humour and over-the-top silliness of games like Turbo Dismount or Guts and Glory, with the trial-and-error building aspects of things like Kerbal Space Program, which also happens to produce some hilarious results. Everything points to this game being a winner, and in many ways it is, but it’s held back by some questionable physics and some rather frustrating level design in places.

It is in Early Access however, which means Bad Yolk Games could use player feedback to help fix these issues. They’re admittedly small problems in the grand scheme of things, and I felt like Bad Yolk Games knew that specific level might cause frustration, as the very next level is a nice, open area that encourages exploration and experimentation.

In this open level is a number of hidden (and not-so-hidden) stars for you to collect, which help to unlock new parts for your machines. In fact, every level contains at least three stars, usually tied to optional challenges. Some are simple enough, like bumping into crash test dummies posed around each level, or following a series of checkpoints, but others only offer cryptic hints and you’ll have to work out what’s needed to unlock that star. Some are fun, some are more challenging (especially with those wonky, cartoon physics) especially when you’ve got outside interference from various obstacles. Or those bloody basketball cannons. Grr. Honestly, with its Steam Workshop integration and sharing creations within the community of players, Main Assembly is only really limited by your imagination. Experimentation will lead you to constantly refine your vehicles, or build new ones, to suit each challenge. The creation tools are simple enough that anyone can build basic, boxy constructions, but so incredibly deep that it’s entirely possible to sculpt almost any shapes you want. Even a TIE Fighter, if you really want. Though that will require unlocking new parts like a gyroscope for proper flight. But it is possible.

And I feel like that’s the point of Main Assembly: if you think it’s possible, it probably is. Through experimentation and iteration (and a little patience), you can solve any problem the game throws at you. Much like its Early Access release, Main Assembly will learn from its mistakes and probably capture the hearts and minds of a fair few players along the way.

An Early Access review is a “review in progress” situation. When it’s “out-out”, we’ll remove the “Early Access” tag from the review title and pop a score at the bottom.