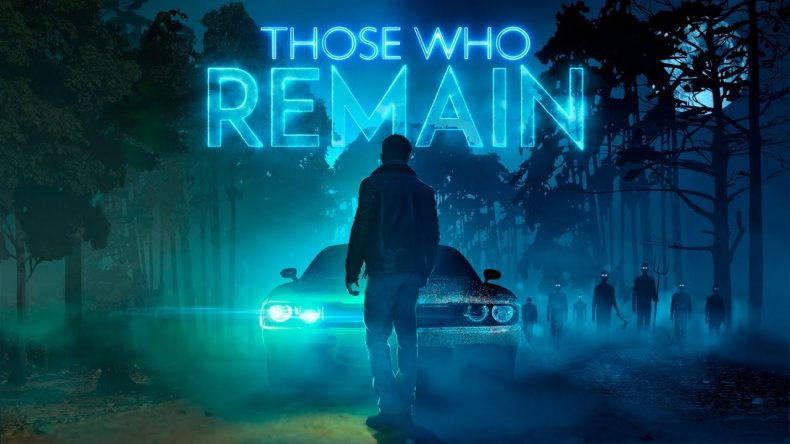 Remember that scene in Halloween, where Jamie Lee Curtis looked out of her window to see Michael Myers watching her from the garden? It was unsettling back when I first watched it over twenty years ago, and it still resonates now. So, when the first shadowy figure appears in Those Who Remain, glowing eyes glaring at you from the darkness, it brought back memories of John Carpenter’s classic 1978 slasher movie.

Those Who Remain is a first person horror adventure with hints of Alan Wake, Outlast and all manner of indie horror titles in there, though this preview build shows just a glimpse of the supernatural elements of its story. It begins with Edward in a sorry state, sat at his desk that is covered in bottles of whiskey, gun in hand. He receives a text from a woman named Diane, asking him to meet her at a motel. Diane isn’t his wife however, and it seems Edward’s guilt is getting the better of him as he decides to go meet his lover, to break things off. Our adventure begins as Edward pulls up to the motel at night. Finding its reception desk empty, he takes a peek at the register to find out in which room Diane is staying. After some brief snooping, it turns out the key is under the doormat outside her room and in he goes. Another empty room, with a running shower that is also empty. In true horror fashion, the phone rings and, upon answering, an unknown voice simply states, “stay in the light,” before hanging up.

At this point, you would probably call it a night and get the hell outta Dodge, except someone steals poor Edward’s car and leaves him stranded in the countryside. Of course, his only option is to walk to the nearest town, but that’s where things really take a turn.

The atmosphere up until this point had been fairly standard. This has all been done before, but when all the lights go out on the road to nearby Dormont, things get creepy. That voice on the phone said to stay in the light for good reason, as it happens. Looking out beyond the safety of the dimly-lit road, all manner of shadowy figures stand watching. None of them move, they simply stare at you with glowing eyes. It’s a very eerie sight, especially when there are dozens of them surrounding you. There is something threatening about their presence, despite them not budging an inch. Just like Michael Myers. Well, before he got all stab happy, of course. That said, in this early build that shows off around thirty minutes of the game, the scares lose their power quite quickly. Perhaps this will be addressed in the final game, bringing a new threat to the ghostly figures, but this early gameplay only hinted at what was to come. Those Who Remain seemed more of a light puzzle game than a true horror experience, however, as I was tasked with finding keys and working out how to light up areas to progress.

One particular puzzle had me working out how to get into an inaccessible car, which required the use of the game’s most interesting mechanic: the otherworldly version of Dormont. This otherworld is dark and ethereal, with massive horrors lurking on the edge of sight, but it also allows you to manipulate objects within the real world. Entering a door of light opposite a gas station, Edward is thrown into an otherworldly version of that same gas station. The inaccessible car is there, covered in ivy. Finding an herbicide, one quick blast sees the ivy disappearing and, upon returning to the real world, the invisible barrier is removed and Edward can now switch on the lights to make a path through the dark entities surrounding the gas station.

The gameplay itself is incredibly simple. I used an Xbox One controller, which only really uses a few buttons. The left trigger lets you run, the Y button brings up your current objective, A interacts with/picks up objects and B throws said objects. That’s it. It was a little fiddly at times to point at what I wanted to pick up, or a light switch I wanted to press (very important when you’re in a dark house filled with evil shadow people), which could be an issue when it comes to the console version, especially if you’re in a time-sensitive situation and you can’t do what needs to be done in time. These issues aren’t present with a mouse, but the final version may well fix this minor controller aiming problem in time for its May launch.

I’m quietly confident that Those Who Remain could be a good, eerie adventure. There are glimpses of excellent atmosphere and an intriguing story, with nothing really given away in my short time with the game. The finale of the demo saw Edward chased by a creepy, screaming woman as street lights, vehicles and pieces of road were sent soaring upward. Just another impressive tease of what’s to come in the final game. While it didn’t offer too much in the way of proper scares, there was enough atmosphere and intrigue to pique my interest for Those Who Remain.

Those Who Remain review
Support us on Patreon for exclusive content