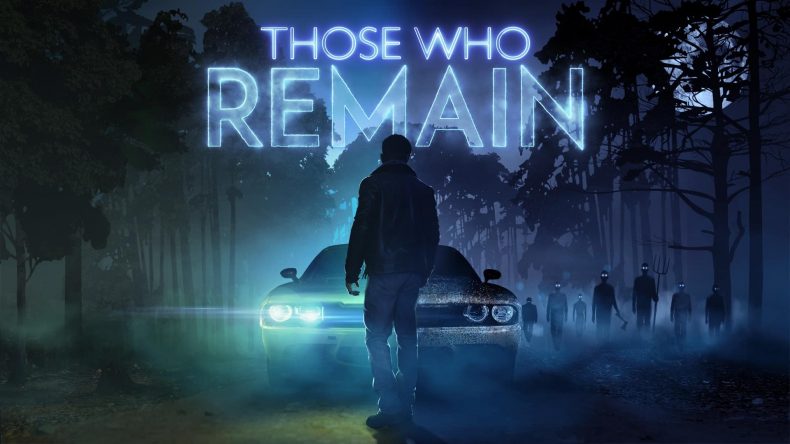 Edward had it all. Wife, little girl, a happy life. Yet the beginning of Those Who Remain sees him drowning his sorrows in whisky, nursing suicidal thoughts. Before he can make that fateful decision, gun in hand, he gets a text from his secret lover. She wants to meet in a motel near the sleepy town of Dormont, leading Edward to get in his car, resolving to end his affair.

Of course, this being a horror game, Edward finds the motel empty. Nobody behind the counter, nobody in his lover’s motel room. The phone rings (gotta love a horror trope), a voice whispering a warning to stay in the light, before Ed’s car is stolen, leaving him alone in the darkness. In many ways, it’s a fairly unassuming beginning. You’re left alone, with no means of defence, in the middle of nowhere. At night. So far, so horror, right?

It’s when you start your journey to nearby Dormont, that things take a turn. On the edges of the light, where the shadows creep in, figures begin to emerge. They don’t move, they simply stare in your direction with glowing eyes. It’s remarkably creepy, and wherever the darkness looms, the shadowy figures lurk. The game sets out its stall early, teaching you that safety is only found in the light. Exploration is only possible by finding ways to light the way through each area, be that via the simplicity of flicking a light switch, or through more complex, puzzle-oriented means.

Most scenes in Those Who Remain will have an “otherworld” form, visited only once you’ve found a doorway made entirely of retina-searing light. It’s a bit jarring and more than a bit painful on the ol’ viewing orbs when you’re exploring a dark room, then open a wardrobe to reveal a blinding white light out of nowhere.

Within the otherworldly versions of each place, you’ll be tasked with finding a way to manipulate the real world, often by opening a previously inaccessible route or somehow allowing light to spill into a previously darkened room, banishing the creepy lurkers within. They don’t like the light, you see. It’s a simple mechanic, but it’s really quite effective at times. Where Those Who Remain falls down, is in the ill-advised enemies that appear in set areas. Sometimes it’s in the otherworld, sometimes it’s the weird, twisted creature that shows up in the real world. Looking like something from The Evil Within, its ruined form and a spotlight where its face should be, this being stalks the area while you search for puzzle pieces or evidence documents to progress the story. Half the time, whether it’s the spotlight creature or one of the hulking monstrosities of the otherworld, they just aren’t scary. They’re a nuisance, easily avoided most of the time. Their inclusion feels unnecessary, never really adding anything to the experience except irritation.

The worst of these creatures is “Mother,” introduced very early on. As generic as they come, Mother is the stereotypical creepy woman, shuffling awkwardly at unnatural speeds as she chases Edward throughout Dormont. On more than one occasion, she caught me purely because the game either offered no clue where to go, or because the design of the chase environment was poor. It got to the point that, whenever she showed up, my shoulders would sag and I’d just want to hurry up and get through to the other side. It’s a real shame, because there’s an almost Silent Hill vibe to Those Who Remain’s setting and its psychological brand of horror. The premise is superb, the shadowy figures are menacing, but like every other “enemy” in the game, they’re misused. As the game progresses, lights sometimes flicker, blinking the shadows in and out of existence. But if you mistime a movement and end up in the darkness, it’s instant death. Which can mean being plonked back at the start of the area, because the checkpoints are so rare. On the third or fourth attempt at a chase sequence, having had to repeat the section leading up to said chase, all the atmosphere is drained from the experience. When the horror becomes pedestrian, something is wrong.

Those Who Remain has its moments, genuinely making you think as you uncover the truth about Dormont’s tragic history, forcing you to make difficult decisions. It keeps you guessing about what Edward has to do with it all, again echoing Silent Hill’s way of using a character’s psychological issues to warp their reality. If the monster encounters didn’t feel so out-of-place, Those Who Remain might not have been such a disappointing affair.

There’s an intriguing and intelligent story to Those Who Remain, but poor checkpointing and awkward chase scenes often spoil the experience.