previous
Those Who Remain review
random
next
Red Wings: Aces of the Sky review
0 likes 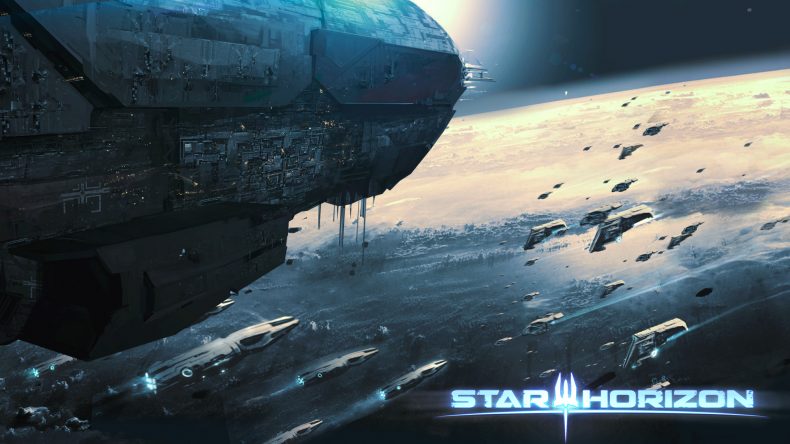 One of my favourite series growing up was Star Fox  (or as I knew the games at the time, Star Wing and Lylat Wars). I’d spend hours flying through space in my Arwing, blasting enemies and saving the galaxy. With revolutionary graphics at the time, it was incredible to be able to fly through a 3d stage on the SNES. The rail shooter hasn’t exactly hogged the spotlight since then, and Fox McCloud hasn’t been seen in his ship since Starlink. Star Horizon looks to fill that laser-shaped hole in my heart, with John and his AI Ellie at the controls.

You start Star Horizon greeted by the monotone voices of John and Ellie, fighting rebels as part of the Federation. After the battle goes disastrously wrong, John is put into hypersleep and awakens trying to find out where he is, and what happened to the Federation. It’s a trope-laden tale, where our hero has to question his alliance and decide who to fight for.

Fighting enemy ships is fairly straightforward. You follow a set course, and have lasers, homing missiles, and powerful rockets to destroy any baddies in your path. Each of these, as well as your hull, can be upgraded to add to your power and survivability between stages too. Feeling your abilities improve is rather satisfying, but because the game doesn’t know what you’ll focus on, the difficulty is a bit all over the place throughout the stages. Each level has a different objective, which if you fail requires you to restart the mission or checkpoint. Some levels you’ll have to destroy a set amount of enemies, some you’ll have to defend your allies, others require you to simply beat a boss. The slight variety in your focus each level does mix things up a bit, but the instant Game Over fail feels pretty cheap. Going back to a previous checkpoint sometimes isn’t enough either, if you didn’t blast enough baddies in the first half of the level.

There are a few different enemy types in Star Horizon, but none of them feel very inspired. You’ll be facing a lot of standard fighter ships, turrets and mines, and it doesn’t really feel like any of them require a particularly different strategy. If there are a lot of targets you’ll use your swarm of missiles, but as they’re on an incredibly short cooldown you can basically spam the button without much thought. This lack of variety also carries over to the boss fights, which are essentially just bland boxes with turrets plastered all over them.

Graphically, Star Horizon is regrettably unimpressive. In what was once a genre that broke visual boundaries, it isn’t much more appealing to look at than its Nintendo 64 inspiration. Your ship is pretty sleek and shiny, but enemy craft and space rocks are less polished. The shadows in particular are rather ridiculous, and there’s no reason that an asteroid should leave a perfectly square shadow.

As you’re flying through the less than picturesque levels on your set path, your ship will often twist and turn. In some levels in particular, you’ll be moving from one side of a boss to the other as the whole screen rotates 720 degrees for no particular reason. For some people, this over the top movement won’t be an issue, but I was fighting an eternal battle with my stomach contents. John and Ellie’s corkscrew adventure is a little basic in the story department, but the plot of rebels versus federation is perfectly serviceable. Unfortunately the quips John spouts are harder to cope with. Around every 30 seconds he’ll gleefully shout “Talk to the hand, cos the face ain’t listening!” to the enemies he’s blasting, and it never stopped making me cringe with sheer embarrassment. This isn’t helped by the fact that the voice acting is painful, and not in an early Dynasty Warriors entertaining way.

I had one last issue during my time with Star Horizon, but unfortunately it’s a big one. On the last stage I played, the enemies didn’t spawn in and I wasn’t able to destroy enough of them to complete my objective. I restarted the level multiple times, closed the game, and even reinstalled it to no avail. It’s not often you encounter a game that’s completely broken like this, but it’s obviously unforgivable.

Star Horizon just has too many issues to recommend to even the most dedicated of space shooter fanatics. The gameplay is fine on its own, but the lack of enemy variety, painful voice acting and jagged visuals drag the overall experience down. Add to these issues the fact that one stage is entirely unbeatable, and you’ll be reaching for the eject button.

The gameplay is decent

Star Horizon simply has too many issues to warrant playing. Poor graphics, voices and variety make for a dull experience, and one level is broken to the point of unbeatable. If you want to blast some enemy ships, just play Starfox again.

Starfox 64 Makes A Return In 3D