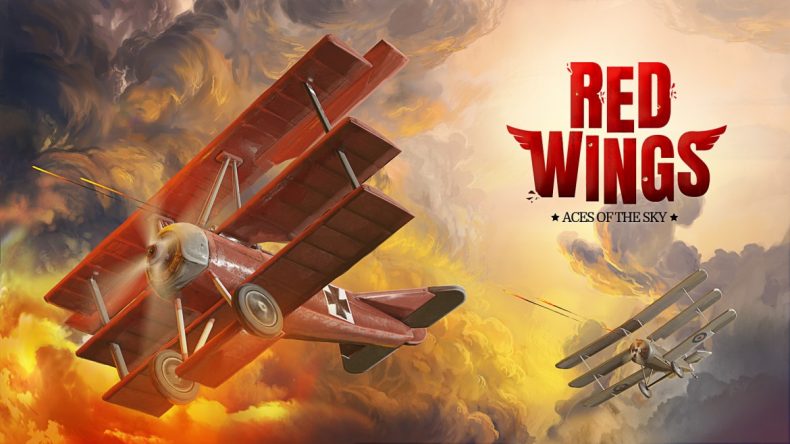 Manfred Albrecht Freiherr von Richthofen, or the “Red Baron,” was an esteemed fighter pilot with the German Air Force during World War I. He was credited with 80 combat victories in the sky, becoming one of the most successful pilots of all time. His plane has become iconic, and his legacy has been the focus of many films and books since he was shot down above Vaux-sur Somme in 1918, and now his story has been brought to life in All In! Games’ Red Wings: Aces of the Sky.

Although it’s not a serious take on the Red Baron’s conquests, Red Wings gives you an idea of how his legendary career took shape. You can play as part of his squad, or the ones who are tasked with bringing him down, through various missions. There are two story threads, and each one offers a similar style of game. Variety isn’t in abundance, but you do get to experience the freedom of being a fighter pilot. Some missions may require you to take down a set number of enemy aircraft, while others have you taking out airships to stop the enemy. Bomber missions require you to blow up bridges from above whilst dodging anti-aircraft guns, and you’ll also be tasked with flying through rings as quickly as you can. This is no Ace Combat. Controls are easy to get to grips with, opting for a more arcade-based system. Depending on how you perform, you’re awarded stars that contribute to your skill tree, and from there you can improve a whole manner of skills, such as certain cooldowns taking less time.

Your plane can perform barrel rolls to avoid enemy fire, as well as turning 180 degrees in one swift motion. You can give orders to your fellow squadron, and also initiate a ‘special move’ that allows you to put a bullet through your enemy’s head, but this needs time to build up throughout the mission. You don’t have a lot of choice in what you can do, but each move comes in handy. Activating your special isn’t the easiest, however, as your enemy needs to be on death’s door. Also, you have to be incredibly precise for it to work. One of the most frustrating things is the kamikaze mentality of almost every enemy plane. When you’re trying to shoot someone down and they fly straight at you, it does a lot of damage to your plane and makes no sense. It’s probably the worst element of the entire game. In the bottom left of your screen are various gauges and a mini map that give you the vital information you need. If you spend too long in the sky your fuel depletes, and if you keep getting shot or crash into enemy planes, the integrity of your plane will suffer. Scattered around the sky are green rings that replenish health and fuel when flown through. These come in very handy, especially when you’re faced with a significant amount of enemy planes. With nowhere to hide, you’ll often lose health, so these rings are vital for your survival.

Red Wings: Aces of the Sky is a pretty game, opting for cel shading over realism. There isn’t a lot of variety in level design, but the range of planes is where the art shines. You unlock new planes and skins by completing levels and challenges, and each one is beautifully designed. The comic book style narrative in between missions looks good, but it never really grips you either. The music is bombastic, complementing gameplay by providing a rousing soundtrack for your aerial dominance, but due to the repetitive nature of the mission structure, it can become a bit of a slog as you make your way through later levels. Outside of the campaign, you can play through a Survival mode that sees you take on waves of enemies. I actually preferred this to a lot of the missions in the story because there’s a satisfaction to hunting down enemy planes and trying to build combos for taking a succession of them out in a row. You’re also free to play in local co-op if you wish, which helps a lot more than having AI controlled teammates. It never felt like they were truly helping my cause, so having someone else in the cockpit by your side does far more damage to the enemy.

If you’re looking for some casual arcade shooting, Red Wings: Aces of the Sky is a great choice. With over 50 missions to play through, there’re lots of opportunities to make use of the simplistic systems, and when using the Switch’s motion controls, it feels as though you’re using the joystick inside the cockpit. Although missions don’t offer enough variety, building your skill tree, unlocking new planes, and playing with a friend means you can play for some time without getting bored.

Red Wings: Aces of the Sky is filled with over 50 missions, and although there's plenty to do and the controls are easy to get used to, it does become repetitive after a while.