previous
The Survivalists review
random
next
Amnesia: Rebirth review
1 like 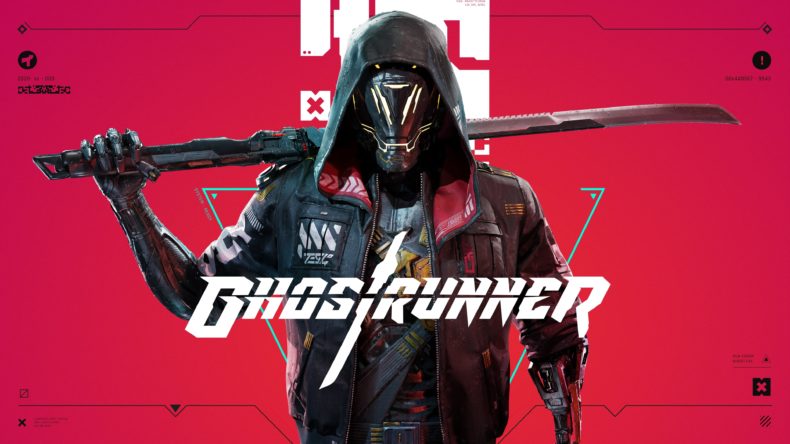 I know some of you might find it dull to begin a review with a blast of stats, but I feel I need to give you a little information here that will put the rest of my Ghostrunner review into perspective. It took me 14.6 hours to complete the game, and in that time I died 1,635 times – and yes, I added them up when I was done. For those of you who can’t be arsed to do the math, that’s an average of 2 deaths per minute. Probably more if you consider that there’s a few minutes worth of cutscenes in the game where I was relatively safe from harm.

Was that because Ghostrunner is particularly hard, you ask? Well, yes and no. I mean, it is hard – and I’m not being hyperbolic when I say that some people will play a few levels and give up. It’s more due to the nature of Ghostrunner which, if you played the demo, you’ll know is a game that relies almost entirely on trial & error. A brutal hybrid of SUPERHOT and Mirror’s Edge, it’s a game based on momentum, timing, and, above all, perseverance.

Set in a dystopian future where the last vestiges of humanity have been corralled in a single, colossal tower, Dharma City, you play GR-74, an otherwise unexceptional cyborg-like law enforcer who also happens to be the last of his kind. After the two rulers of Dharma City had something of a tiff over how to run the city that resulted in a civil war and military coup, the Ghostrunners were all but wiped out and the victor, Mara, assumed an iron control over the denizens of Dharma – denizens she has been experimenting on ever since in an attempt to perfect the human condition. Skipping further spoilers, you have been awoken by the Architect, an almost omnipotent AI who exists inside the Cybervoid, a network that connects all of Dharma City’s sub-systems, and drafted into the Climbers, a dwindling rebel group who oppose Mara’s rule. 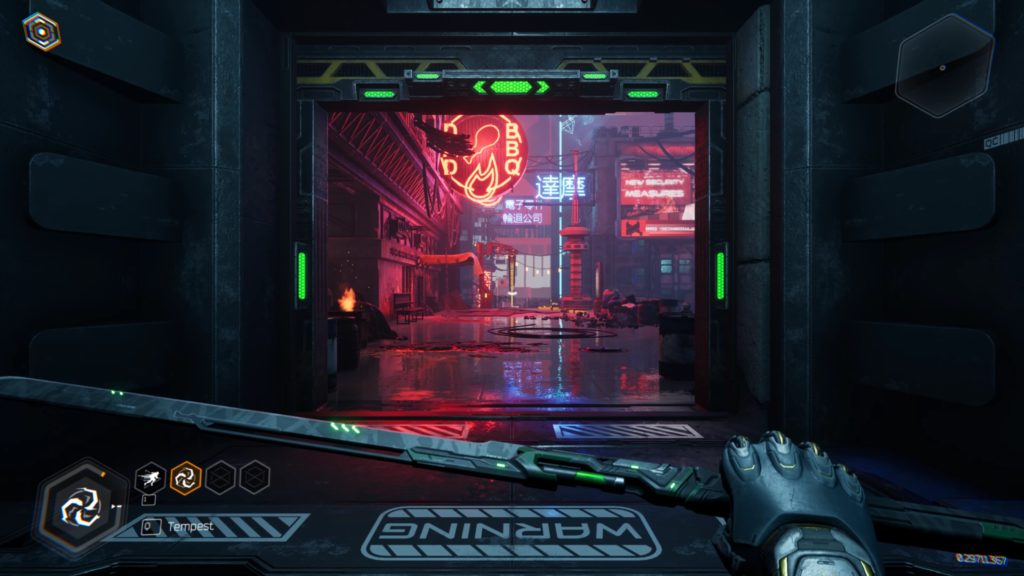 To say much more would be to give away the plot, and it would be unfair because Ghostrunner does quite a lot with what little story there is. The interplay between GR-74, the Climbers, the Architect, and Mara is always entertaining to listen to, and some of the dialogue is exceptionally well-delivered. But, frankly, the story takes something of a backseat to the action from the get-go.

Simply calling Ghostrunner “hard” is missing the point a bit, though. It’s a breakneck game comprised of levels designed to be played over and over, each one a miniature speedrun course. There’s nothing rogue-lite here, though; instead, each mission is a collection of short checkpoint-to-checkpoint segments that exist solely to test your reflexes, perception, and patience.

Curiously, besides the double-jump, there are very few platform game conceits unaccounted for here. From wall-running and sliding to slowing time and swinging from hook points, Ghostrunner squeezes an incredible array of mechanics and enemy types into its missions. While some of the level design makes little sense from a practical point of view, with levels comprised entirely of walls to sprint across, hazards to slide under, switches to hurl digital shurikens at, and enemies seemingly plonked on platforms on the off-chance that you happen by, you won’t care when you’re playing. There’s an element of precision to Ghostrunner that I have never seen the true equivalent of in a first-person game. 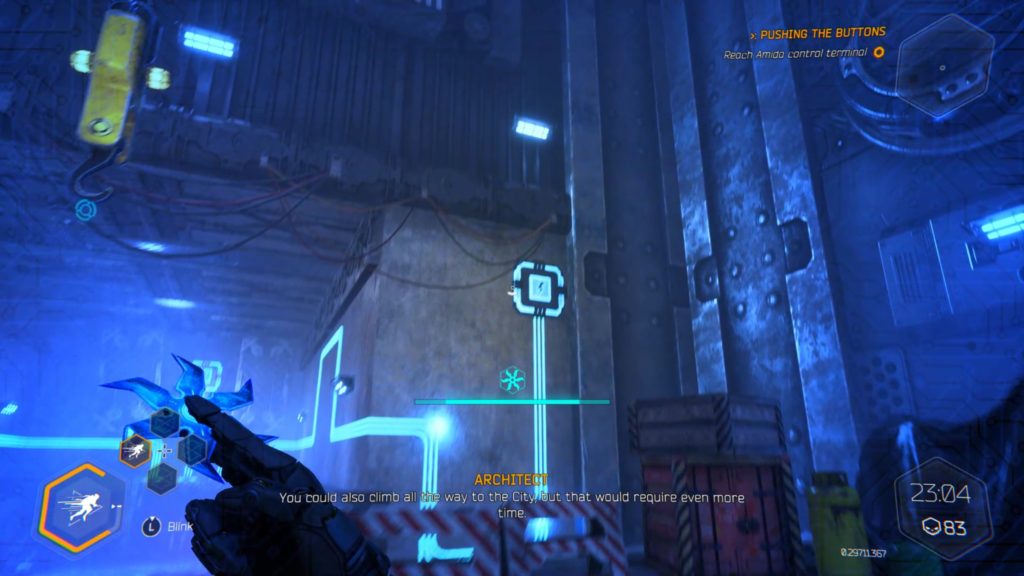 What threw me at first is that there’s no “sprint” button. You begin moving at a steady pace, but the more slides, jumps, and swings you chain together, the faster you move. There’s often no thinking time whatsoever, and I lost count of the number of times I fluked a landing, or spotted the glowing blue disc of a hook-point in mid-fall, or hit a slide at just the right time to avoid a sudden hazard. I’ll confess right now that I simply couldn’t play this on a mouse and keyboard; my still-in-training console-oriented brain couldn’t keep up with the button prompts and I switched early on to a gamepad. Those who have a proficiency in M&K may find it slightly easier in terms of precision and reflex, though, so that may have contributed in some way to my huge death count.

Also, though, you won’t realise how many deaths you’re racking up because – on PC, at least – load times between deaths and respawns simply don’t exist. Hitting the continue button after a death respawns you instantly, to the point where if you’re fast enough on the button you won’t even register the words CRITICAL FAILURE. It’s exceptionally fast – and it has to be. Waiting a few seconds for all 150 respawns in a half-hour level would get pretty annoying.

Ghostrunner is a game that thrives on style, whether you’re nailing a fingertip-blistering run or you’re engaging in one of the sparse boss battles, or even simply traversing a neon-soaked cyberpunk cityscape in one of the few lulls between hyper-fast combat encounters. Everything kills you in one hit: no matter the enemy or obstacle, a solitary hit is all it takes, and so in combat Ghostrunner becomes a game of experimentation as you try to take on a room of multiple enemies without a single mistake. 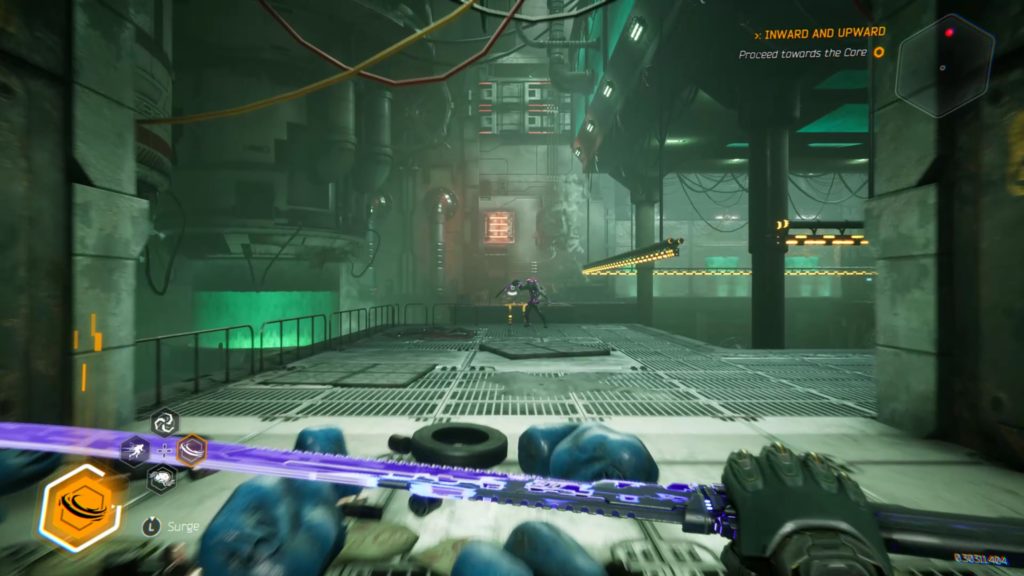 Initially, you’ll face dudes with pistols, but steadily more and more of Mara’s twisted creations will reveal themselves, including but not limited to: cyborgs that can copy themselves, cyber-ninjas who can close the distance to you in the blink of an eye, and grotesque abominations that will scuttle towards you and explode. Enemies and mechanics are introduced at a steady pace, but none of them outstay their welcome or feel overused.

Thankfully, in addition to your trusty katana (which you can customise with skins you find as hidden collectibles) you have a decent array of skills and upgrades to apply as you progress. Pretty early on you’ll be given the Sensory Boost augment, which allows you to slow time while you’re in mid-air and reposition yourself. This can be crucial if you’re slightly off-centre on a jump, but is utterly essential for avoiding projectiles launched by enemies. You’ll get used to maintaining momentum to close the distance on a target before leaping and using Sensory Boost to dodge a bullet or get behind a shielded enemy. In some areas, you’ll need to find and destroy a central node that powers overshields on the local enemies, and to stay still even for a heartbeat is deadly,

There are four primary abilities on a pretty hefty cooldown that can make a massive difference to how you approach the combat, although the coolest one isn’t unlocked until you’re close to the end. The skill tree is like a Tetris grid into which you slot upgrades for all of your abilities, the map, your Boost, your dash, and your various attacks. While more of the grid opens up as more upgrade blocks become available, it’s a constant juggling act to pick the right skills for the right situation and you’ll often need to dip in and swap things out. A loadout or quick-swap system would have been handy, but I did develop a core set of upgrades that I used in most situations, usually ones that filled my Focus meter quicker or allowed me to deflect enemy projectiles with my sword. 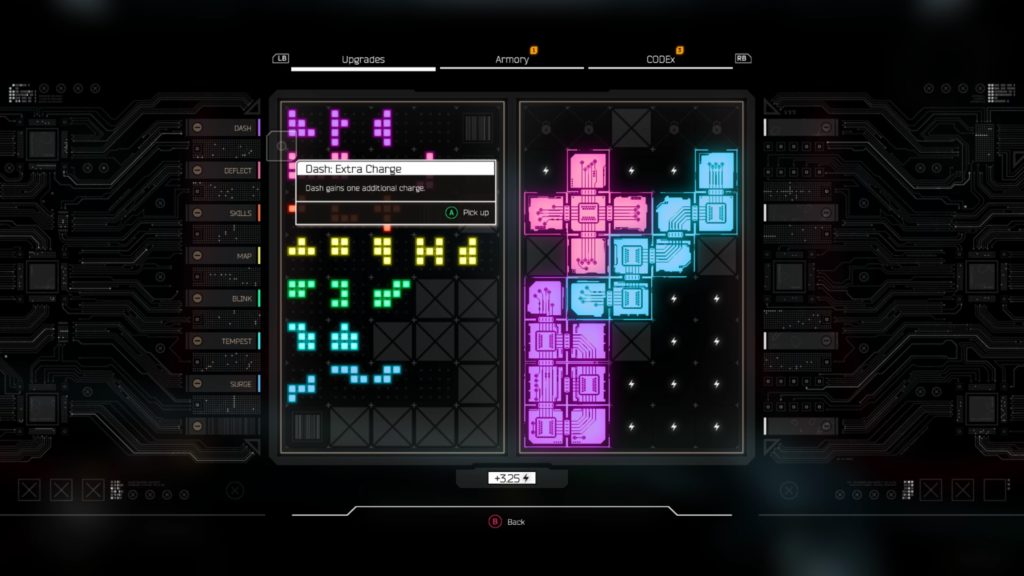 Several boss fights punctuate the narrative, and each one is a battle of attrition as you are constantly forced to try, fail, learn, and adapt. The first one against a massive machine known as TOM is exceptionally good, a multi-phase platforming gauntlet that tested everything I had learned up to that point. Interestingly, you can go back and replay previous missions whenever you like, and you’ll retain all the new skills and upgrades you’ve picked up like it’s a New Game Plus mode.

I should stress that while I came out of Ghostrunner elated and relieved, it frustrated me as much as it thrilled me. This is a game built for perfectionists, for those who will run a single level over and over again for nothing but bragging rights. That being said, there are some small issues that I couldn’t ignore. The first is that repeated deaths can occasionally have an odd effect on the AI, in that it sometimes doesn’t fully reset and so an enemy that had to turn and face you in the last attempt is ready for you in the next one. At first, I thought it was deliberate, but it will reset after another attempt so I think maybe the game is simply too fast for itself at times.

Also, you can’t leave a mission during a run and pick it back up at the last checkpoint. With a few notable exceptions where you find an upgrade halfway through a mission, if you quit out you’ll need to start again. You’ll also need to repeat the previous stage if you opt to level select and run an old mission out-of-sequence. It’s really quite tiring at times, as some missions took me upwards of 45 minutes to brute-force my way through them. And though I swore a lot and cursed the developer more than once, it never felt like a slog; it felt like a mountain I had to crest, come what may.

Despite me managing to push through to the end, I feel like Ghostrunner may simply be too hard, or at least too punishing, for some people. It requires such precision and timing in certain places that I had to put it down and have a break before I carried on, but by the second boss, I knew I had to keep going. I was so immersed in Ghostrunner’s world and so intoxicated by its myriad mechanics that I couldn’t stop playing, even when I had other games vying for my attention and I knew that whatever Ghostrunner had in store would be brutalising.

From the deepest bowels of Dharma’s air filtration system to the bright-lit slums of its upper levels, the setting is gloriously grim and saturated in detail, lit by flickering neon light shows, draped in scrawled graffiti, and sporting all the signs of a civilisation eating itself alive. Even more impressive is that I didn’t notice a single dropped frame. Granted, I didn’t have a counter running while playing, but to my eyes, the entire experience was as smooth as butter. And the soundtrack, too, is amazing, pumping through the ears and veins at a breakneck tempo, pulling you ever deeper into Ghostrunner’s cyberpunk world.

Those who look for an easy mode in their games may want to give this one a wide berth, but for those players who crave a challenge and can’t resist the call of the leaderboard, Ghostrunner is an incredibly steep yet immensely satisfying experience.

A lot of trial & error
No hard checkpoints

Ghostrunner is built for that subset of gamers who enjoy the steepest challenge. The story is solid, the world is beautiful, and the precision insane - but this is a hardcore experience from start to finish