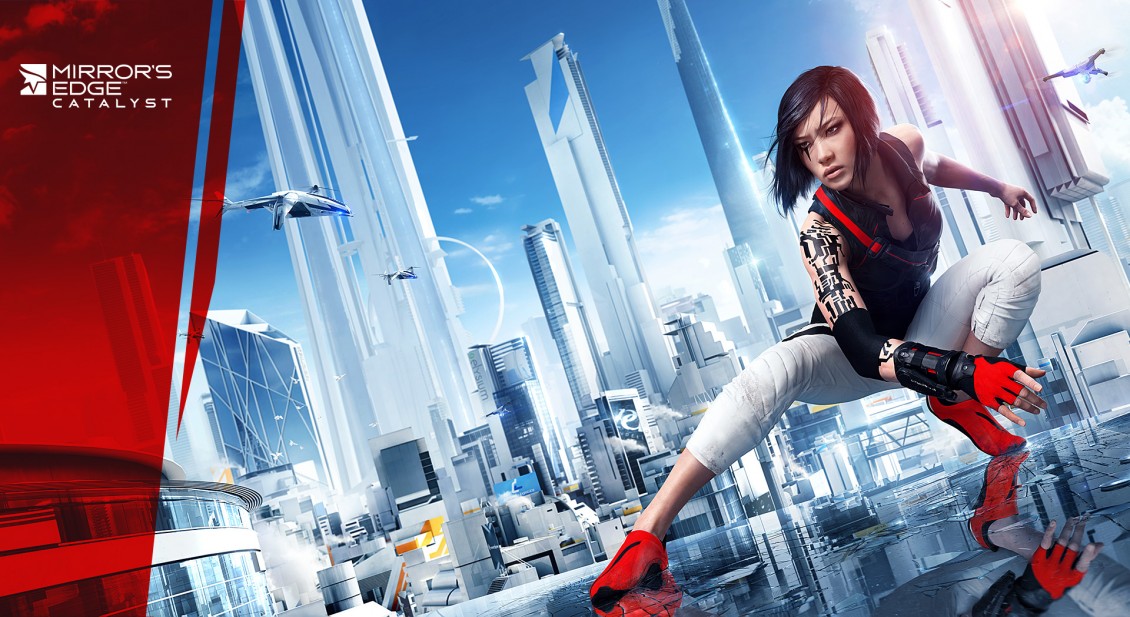 I move through the city of Glass with unabashed grace; my heart races as I speed across the skyline of Cascadia and absorb the wonder of chaos in every step I take. DICE has nailed parkour and the freedom it brings with utter precision, making sure you move about the city at great pace whilst still having full control of your actions. Mirror’s Edge Catalyst may not have the best story or the most likeable characters, but its gameplay is some of the best I’ve seen on the current gen.

The city of Glass is an apparent utopia with a beautiful blue sky illuminating the clinical beauty below. Big white buildings with company branding strewn across and large billboards doing their best to promote the good we are led to believe exists within the conglomerate. You play as Faith, a woman trying to bring down the evils of corporate greed as well as unlocking the secrets of her own past. I’m not going to sugar coat it, the story is pretty bad. It does its best to squeeze every trope of the sci-fi sponge dry, often getting in the way of what makes Catalyst great, ending with a relatively underwhelming finale.

Most of the characters you encounter are severely two-dimensional and completely uninteresting. Icarus is oblivious to his own annoying traits, Kruger is a terribly bland villain, and even Faith falls short of being a good main protagonist. One of the people you’ll meet is Plastic and she’s probably the best of the bunch, bringing something more than a brooding glance or a vengeful retort to what’s going on. I often felt the dialogue got in the way of playing the game, especially as they were talking about specific plot details or mission objectives and I was concentrating on not falling 200 feet to my death as I flew around the city. With all that aside, running throughout Glass is phenomenal and the way it incorporates all of your abilities is excellent. Getting from point A to B will consist of wall-running, sliding, leaping and swinging, and once you begin to master the controls you’ll never want to stop. You can eventually unlock the ability to fast travel, but I never used the ability to do so once – I didn’t want to; the speed at which you move and the satisfaction of never stopping is grand, making movement in Catalyst its best feature by far.

You’re rewarded for fluidity and your continual movement through Glass in the form of the focus shield. For every successful manoeuvre you pull off, your focus shield builds and provides extra protection to your health. If you get shot by a KrugerSec enforcer, your shield will diminish, but your health will not. Only when you stop or botch a landing will your shield disappear. It’s a nice feature and one that’ll help you no end, increasingly so when the enemy’s presence grows as the story moves along.

Combat isn’t as strong as it could be, but you are never really encouraged to fight if you don’t need to. If you’re moving through the city outside of the story missions it’s advised to not get into a fight. KrugerSec are a bad bunch and you can get overwhelmed if you’re not prepared. You will never wield a gun in Catalyst, but you do have a couple of tricks up your sleeve. You have light attacks which won’t cause you to stop if you’re trying to run past your enemies, they’ll just knock them out of the way.

Heavy attacks will cause the majority of damage, and when you mix them up with your free-running it makes for interesting results. In the main story, you’ll be forced to fight large groups of enemies, so trying different techniques like wall-running then landing a kick will do more damage than kicking from a stationary position. At times the combat feels a little ham-fisted; you’ll land a kick which’ll knock an enemy into another enemy or into a barrier and they’ll clumsily fall over, looking unnatural and plain weird.

You can upgrade your movement, combat, and gear by earning XP, lending Mirror’s Edge a very light RPG element to it. As the story progresses, new traits are unlocked like the MAG rope and the ability to quick turn, both improving movement throughout the city. You can increase how much damage you do in combat and also add extra bars to your health gauge. Each upgrade adds subtle changes to Faith’s skills and help to make you a great runner.

There’s plenty to do outside the main story, including side missions, deliveries, and dashes. Most of the deliveries involve reaching a recipient within an allotted time and the dashes are aimed to race against other times set by other players, with dashes being time trials set in certain parts of the city. There are some other additions like billboard hacks and grid nodes, but social play is where it aims to please players who enjoy a challenge. You’ll be able to create your own time trials for others throughout Glass and also partake in Beat L.E.’s which are challenges created by other players to find shortcuts and reach certain locations in the city. I spent a good hour replaying the same time trial just to beat another player because once I started, I need to beat it.

Playing Mirror’s Edge Catalyst is addictive, there’s no question about it. Making your way from the Anchor District to Ocean Glass View to Downtown is so rewarding and it never gets boring. It’s a shame the story and characters are unoriginal and all too familiar, but on the whole they don’t really affect your enjoyment of the game. The city of Glass is a stunning environment and it’s the vibrancy in its simplistic design that’ll make you want to explore the world again and again.

If you’re buying Mirror’s Edge Catalyst, support us by using these links:

Story and characters are dull
Combat is ropey at times

If you can look past the weak story and the dull characters, Mirror’s Edge Catalyst has some of the best gameplay mechanics on the current gen by far.