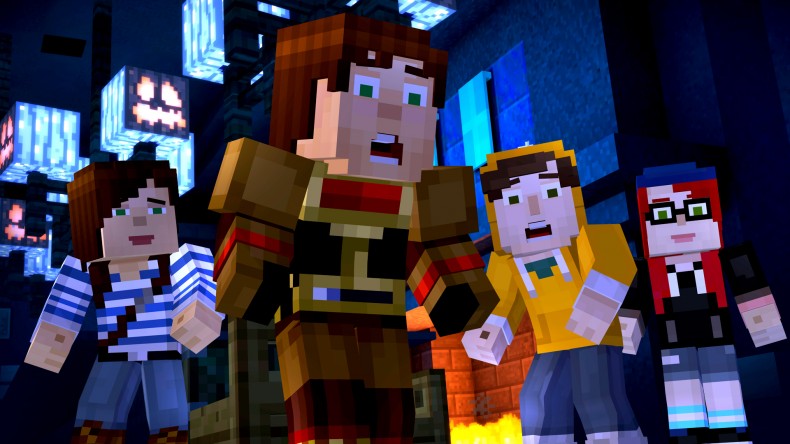 As I’ve already discussed in the review for episode five, Minecraft: Story Mode has been a departure from the usual Telltale Games method of story telling with Order Up existing as a standalone episode with it’s own contained story. A Portal to Mystery continues this trend with another self-contained episode that still has the over-arching goal of finding the old builders and a way home. Our heroes find themselves once again in a strange world helped there by the enchanted flint and steel they discovered in episode five, and immediately they are placed in danger with a horde of zombies heading for them. The opening is one of the best title sequences in the Minecraft: Story Mode series so far with some clever and amusing ways of presenting the details. It’s a shame then that it doesn’t maintain the high level of the start.

Jesse and his or her friends, Petra, Lukas, and Ivor head towards a huge, mysterious mansion in the distance and it is there that the story begins: a classic “whodunit” murder mystery with a few deaths and lots of redstone fuelled traps. Once our team arrive at the sprawling mansion we met a new cast of characters; a crew who will only be familiar to fans of YouTubers like StampyCat, Stacey Plays, and LDShadowLady. The introduction of the YouTube cast feels wedged in, a deliberate piece of fan service that totally alienates you if you aren’t familiar with their “Let’s Play” shows on YouTube. The fact that their characters in the episode retain their YouTube persona’s just adds to the awkwardness of it all, it’s hard to feel bad about a character called CaptainSparklez having something bad happen to him when he’s called CaptainSparklez, rather than his real life name of Jordan. Furthermore, the dialogue feels like there are a lot of references to events that have happened in these various shows and streams, but as someone who has no interest at all in them despite loving Minecraft itself, the jokes are lost a little bit. As such A Portal to Mystery feels the least funny of all the episodes so far.

I don’t want to go on too much about the introduction of the YouTube characters, but they do play a significant role in the story itself and the quality of the voice acting is at times a bit jarring, especially when compared to the usual high standard that TellTale Games has. This isn’t a slur on the people themselves as they do try admirably, but voice actors they aren’t and it becomes increasingly distracting the longer the episode goes on. Thankfully, or not depending on your views on the introduction of these real life characters, the episode is pretty short, clocking in at just under and hour and half for me.

TellTale often comes under fire for the fact that the choices you make while playing their various stories do not really have a major impact on the overall outcome of the narrative, and generally that is fine because the stories are crafted over numerous episodes and you have a feeling that they do matter even if it is only on a very small scale. Unfortunately, with the shorter stories contained neatly within one episode the choices you make really are exposed as moot. They really feel outdated and pointless during A Portal to Mystery and serve only to keep you focused so that you don’t miss the timer count down on one of the choices. It’s a shame that they have been exposed so much in this episode because I really felt in the first few episodes that the decisions I made reflected in a different experience; the choice to side with Axel for example took me to Boomtown, rather than Redstonia with Olivia, the choice to save Gabriel or Petra feels like it has implications for later episodes in the tale of the Wither Storm, but here they don’t have any impact at all and that is a shame. The story feels like it is happening regardless of whether you participate in it or not, and that isn’t how I want to feel when playing one of TellTale games. There are positives for A Portal to Mystery, the whodunit murder mystery is very engaging and the twists and turns meant that I had a few suspects in mind. I was kept guessing who the culprit was right up to the end reveal. The story also leads us neatly around various parts of the mansion with some fun building and light problem solving to do. Overall though, I am starting to feel that the lack of any real serious threat for Jesse and his or her band of friends means these episodes are starting to become a bit lacklustre as there is no real drive to continue to see what happens next. Even the next episode reveal didn’t show much in the way of further peril and adventure for our team. I also miss Axel and Olivia.

A disappointing episode then for a series that has been good fun so far. I felt that the introduction of the fan element detracted a great deal from the episode as a whole, but as I have mentioned in reviews for earlier episodes, I worry that I’m no longer the intended audience for this series. Minecraft has a young and very passionate community (I’m a huge fan of the game) and I’m fairly confident that those fans will adore this episode with their favourite YouTube stars playing pivotal roles. But the self-contained story lines are starting to show the cracks in TellTale’s model of storytelling, which I’m not sure is a good thing.

If you’re buying Minecraft: Story Mode, use these links to support us:

Too much fan service
If you aren't familiar with the YouTube personalities this will lose you.
Very little humour compared to other episodes

A Portal to Mystery is a disappointing episode. While the story itself is fun, there is too much emphasis on the YouTube personalities that only fans of them will appreciate.