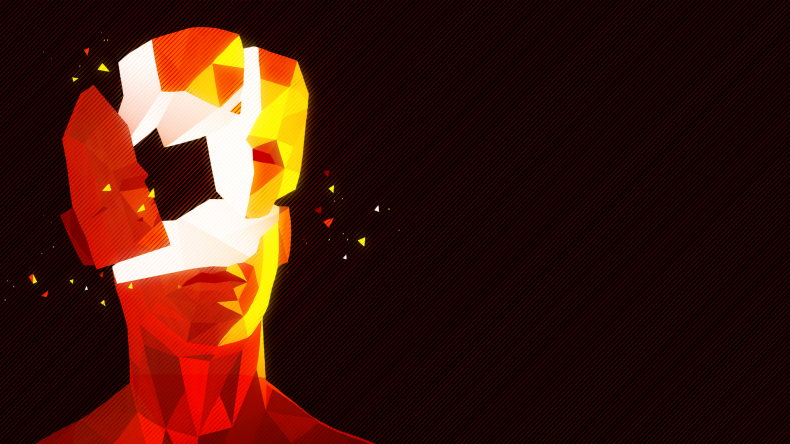 Superhot is one of the coolest videogames I’ve ever played. I don’t say that lightly, and it didn’t take long to get on that list. It’s mostly down to a series of realisations that dawn on you after the first few levels pass by at a fair clip. You’re breezing through the game, the white geometry broken only by the red of the enemy, and things are just fine – cool, but fine. Very suddenly, the difficulty pisses on your chips and you’re having to think about things. You take out a guy, but the other guy blows you away from behind. Next time you get them both, but a wide burst from a shotgun catches you and puts you six feet under.

Then you nail it.

You’ve already realised that the replays synonymous with the mesmeric, mantra-like chanting of “SUPER. HOT. SUPER. HOT.” are in fact showing your actions through the level replayed at the speed of a normal first-person shooter, and that’s great all by itself. But this time, because the level was hard, you watch it differently, and like me, you realise how badass you looked. You punched that guy so hard he fell into the toilet; you glassed the next guy; threw a pool ball at the shotgun-toting bartender, and another at the pistol dude coming at you from the back. You grabbed his gun, took out the shotgunner, turned around to see all of the onrushing enemies; dodged their gunfire and messed them up. It’s all at the same time glorious, exhilarating, and the coolest thing you’ve ever seen. It’s so good that I’m writing this having realised you may not even know what the game is, what it’s about, or what makes it so special. Basically, it’s a first person shooter, only the rules of time don’t apply. Nothing happens until you move. Someone will fire a bullet but slowly enough that you have time to side step away from it. Those rules also apply to you, meaning that if you fire a bullet and the enemy is moving, you might miss. Static enemies become fodder, but a moving target requires precision, timing, and planning. It’s less a shooter, and more of a puzzle game that wraps itself in a shooter blanket, in that sense.

And it’s good at easing you in. Initially you’ll be using a pistol and occasionally your fists, but quickly you’ll have to learn how to deal with the wide-burst shotgun fire, and even fully automatic weapons that, when you possess them, will fire with one click, but will let loose a barrage from the barrel. Glass bottles are great to quickly get some damage in, but they break, so maybe it’s better to throw them to disarm a stronger foe. A baseball bat has a similar feeling to it, and an early prison level that sees focus on a brawl between you and five (or more, it’s a blur at this point) guys feels familiar enough, but different and just as satisfying.

Underscoring all of this is a story told (mostly) via a text chat between you and an unnamed person. This stranger introduces you to SUPERHOT and from there it’s an intriguing tale that plays with your perceptions and known knowledge. It’s never as mind-blowing as wants to be, but it does give you the creeps when enormous text appears telling you “WE CAN SEE YOU”. For a game that could easily have gotten by on mechanics alone, it’s a decent attempt, and is interesting enough to make you want to see it through. The feeling that you’re invading a corporation’s software is well evoked, and it’s helped by the sparse white-space visuals and oppressive yet minimalist audio, which is only really broken by bullets exploding into life, and foes shattering out of existence.

I should also mention the late game mechanics that have been kept secret, that change the way you think – though I wouldn’t want to spoil it. Indeed, I could try to explain how the plot might be an allegory about social media, gaming in general, and is actually rather clever in how it all wraps up, but not something that will last long in the memory, if truth be told. Elsewhere, there are reasons to come back after you’ve finished the sub-two hour story, though a lot of people probably won’t bother, and while we’re talking negatives, there’s how the checkpoints aren’t that clearly marked sometimes, causing the odd moment where you’ll boot the game up only to have to play through levels you’ve already done. But honestly, you won’t care after the first time, because they’re that entertaining to play.

All of this is because SUPERHOT plays with expectations, and it makes you think about the way shooters work. Sure, it’s not perfect, but every time a replay makes you look like the best FPS player in the world, you’ll feel great and want to go again. SUPERHOT is a short game that you may not remember forever, but it’s sweet and burns brightly while it’s with you. It’s inventive, clever, addictive, fun, and yes I’ll say it again: it’s cool.

Mechanically interesting.
Addictive.
Taps into that cool feeling only games can reach.

SUPERHOT is a short game, but it's sweet and burns brightly while it's with you. It's inventive, clever, addictive, fun, and yes I'll say it: it's cool.

SUPERHOT is now available on the Switch