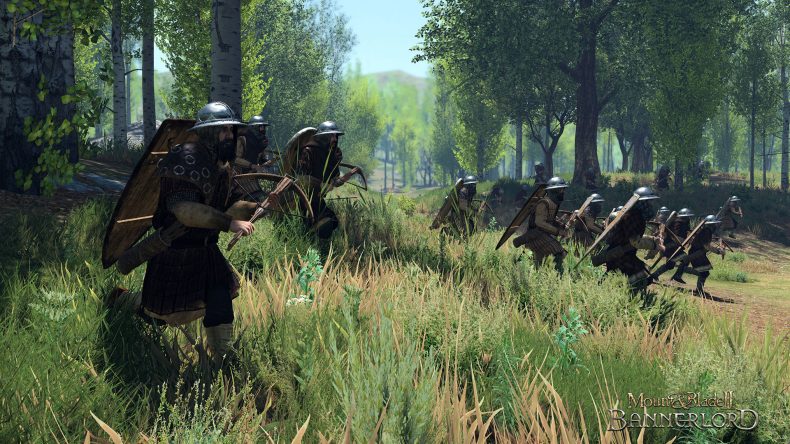 Like the political and military machinations in the land of Calradia, where Mount & Blade II: Bannerlord is set, answering the simple question of whether this is a game worth your time is, well, complicated. It’s an experience that will both frustrate and entice you. It will make you wince and smile at the same moment. You’ll find yourself whisked off to a medieval fantasy land and then abruptly dumped you back into your own reality. It’s a constant contradiction, a confusing melange of the good and the bad, and I kinda like it, I think.

Trying to take a stab at the genre is the first confusion, with the best description I can pinpoint as a strategy RPG. A kind of unique mix of say Dragon Age and Total War. You are the leader of an up and coming clan, looking to make a name for yourself. You’ll travel Calradia looking for fame and fortune, and spilling a fair amount of blood along the way. The gameplay is split thanks to its diverse genres. In terms of being an RPG, you explore tiny holdfasts, as well as large sprawling cities. You’ll interact with characters, take on quests and choose from various conversation trees. The strategic elements come when you take to the battlefield against warring bandits or larger armies. You control your own character as well as your band of followers, with an array of tactics and commands up your sleeve to use to your advantage

If that initially sounds intriguing, exciting even, then I do have to temper your expectations a little. Because the reality is that both the RPG and Strategy elements feel very basic in their execution. Conversations are almost entirely text conversation trees with barely any emotion displayed in facial expressions or body language. Also, most of your options (except key decisions) have little bearing on the progression of each chat. Wandering around towns should be engaging, but with no map, or indication of where to go, you can often wander around for ages fairly aimlessly. The towns also feel empty and dull with very little going on except for the various townsfolk milling around doing nothing much in particular. One repeating quest sees you trying to unearth a spy posing as an arena contestant. To reveal the rogue you need to find clues to his appearance. Three random townsfolk will have information on what he looks like. Your job is to keep speaking to everyone you meet until you discover these clues, with many strangers simply dismissing your inquiries in repetitive responses. Once you found three helpful citizens in the tens you have questioned, you then have to piece together their description – let’s say he has hair, a beard and no war scars on his face for example. Then you wander around the town looking for someone who matches the description and also is not a generic townsperson, but has the moniker “contestant” show up on the screen when you approach. They could be anywhere in the labyrinthine alleyways and buildings, with no guide or map to help you. If you eventually find someone fitting the bill, you challenge them to an arena bout to seal the quest. Just make sure you don’t lose, or indeed challenge the wrong NPC, because if you do, you’ll fail the quest and have lost a good 30 minutes of your life and annoyed the quest-giver from an important noble family. Frustrating it most definitely can be.

The combat doesn’t fare much better, especially when compared to the likes of Total War, either in its range of options and strategy or in its execution. As the leader of the clan, you can choose to fight alongside your men on the battlefield. You can choose a variety of melee or ranged weapons, depending on the situation or the proficiency of your character in each. You can freely move and aim your attacks at the approaching enemy. There are certain commands you can issue to control how your battalion moves or deals with the enemy in front of you. It’s fairly rudimentary but gets the job done in most situations. The biggest frustration you’ll have is that moving with a controller is by far the slickest option, with using a keyboard, making your movement feel straight out of an early Resident Evil title. But the mouse and keyboard option is crucial for pinpoint aiming of ranged weapons and easily commanding your troops, so I was often juggling both methods for the best result which felt incredibly cumbersome.

Visually, it’s alright but certainly nothing special with plenty of low textures and often bland environments. The sounds during battle are not incredibly varied, mainly just a choice of a few phrases or grunts, keeping the voice acting to a minimum. The main tune that plays in the overworld does invoke the Lord of The Rings soundtrack at times though which gives it a welcome sense of grandeur. However, performance-wise Mount & Blade II: Bannerlord really suffers. There’s juttering and jank in so many places whether you’re striking up conversations, or if more than a few fighters are doing battle at once. It seems to struggle with it’s own design a lot, and I’ve had the game crash on me on numerous occasions, even after the patch that was put in to fix the known crashes once it went live on Early Access. My critique has been pretty damning up to this point, and it may be confusing because I opened by saying I actually enjoy playing Mount & Blade II: Bannerlord. That’s because at times, I really, really do. The empire of Calradia is vast, not just in size, but in its depth as well. There’s always plenty of military and political shenanigans going on every day. As you move from town to town, various messages pop up highlighting various characters and factions have altered their allegiances in some far-flung corner. It gives the map a sense of being alive, of lots happening, and you being such a small part of a much, bigger, grander puzzle.

And behind all the jank and missteps, there’s a clear heart here, the scale of ambition is obvious when you play it. And if you embrace the spectacle – warts and all – there’s actually plenty to sink your teeth into. Fighting battles in third-person with an army at your back is much more engaging and action-fuelled because you’re not some omnipotent being affecting things from on high. Instead, you’re getting stuck in with your army as well, and nothing is as satisfying as finishing off an enemy with a solid sword strike or well-placed arrow let loose at just the right moment. Your reputation grows with your experience on the battlefield, and you feel yourself improving with your clan.

There are shops, with travelling caravans revealing where to buy cheap and sell high to maximise your profits to further invest in your army. There are arenas that test your fighting skill, both in teams and individually that reward you with riches and that all-important world renown. Progress the game, and you can recruit companions that provide perks to your clan and you can send them off on specific missions whilst you’re tied up elsewhere. You can swear fealty to lords and fight their wars for them whilst building your reputation. And you can choose to do all of these things or none of them, thanks to the sandbox nature of the game, and the hands-off approach to the main storyline and guidance it provides.

Mount and Blade II: Bannerlord is a game all about ambition. Your own drive for growth as you build your clan, but also ambition on the part of the developers as they attempt to create something truly epic. That intent, it’s fair to say, isn’t quite matched by the technical execution or in its design either. And the performance issues can be a real drag. However, for those willing to give it a go, to ignore the jank and the frustration, there’s a medieval rabbit hole here that can be quite fun to fall down. It’s certainly not perfect, and I would hope the finished game sees some serious performance upgrades, and issues are addressed. But certainly, the foundations are here for something a little bit different and very addictive.