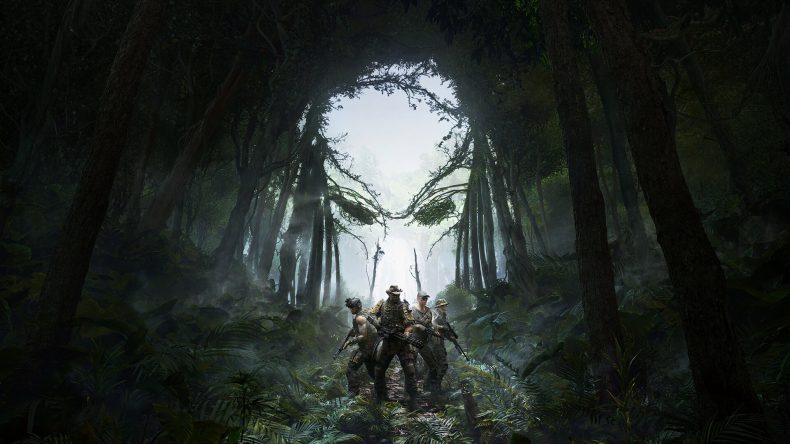 By all accounts, the iconic Predator should be the perfect videogame protagonist or antagonist. One of the greatest movie “monsters” ever created, the highly intelligent, highly honourable alien hunter even comes equipped with a full arsenal of weaponry you can’t see until it pulls it out like it has its own built-in weapon wheel. It has heat vision, cloaking, agility, speed and strength. It’s perfect.

Which begs the question of why developers have struggled over the years to do the Yautja justice in a video game. The closest one has ever come to being “good” was 2010’s Aliens vs Predator, but even that failed to really nail the hunter’s sense of raw power. Stick around, and I’ll tell you why Predator: Hunting Grounds might be the first game to get most, if not all, of the elements in place.

The concept is a little like 2015’s Evolve, in that one player takes control of the Predator and the other four play the rough and tumble special forces commandos dropped into the meat grinder. As you can imagine, the two modes are very, very different. Playing as the soldiers is like a traditional FPS. You’ll arrive in the jungle with a small list of objectives such as retrieving stolen goods or testing a contaminated water supply, and as long as you’re quiet and efficient, you should get at least part way into the second objective before a certain fifth party arrives on the scene. There are AI enemies to fend off, and as you level up you’ll unlock better weapons and mods to create custom loadouts. The overall goal here is pretty simple: complete the objectives and get to the chopper. The AI isn’t all that smart, and you can use stealth or all-out war to get the job done. But the louder you are, the quicker the Predator will find you.

Playing as the Yautja is initially incredibly gratifying. IllFonic have done a solid job capturing how it moves, the pull of his body weight as he scales trees and leaps impossible distances, and there’s no doubt that what you’re in control of ain’t no man. Switching to heat vision has that iconic sound effect you’ve heard in every one of the films, and the ominous click is ever present. But it’s a sense of power that instills you with overconfidence, and that’s where the problems start.

Because you should be overpowered as the Predator. You should feel vastly superior to the squishy meatbags on the ground. And stalking your prey is fantastic, clinging to the trees and using your vision to pick up distant signatures of heat and conflict. If you can get the drop on the fireteam, you can take at least one or two out before they have a chance to respond, or maybe skin a few AI alive and hang them from the trees as a warning. The problem here is that the fireteam know you’re coming. The Predator in Hunting Grounds is not able to get ahead of the fireteam and set traps, and the camouflage cloak is less effective when the other players are looking for it and not mistaking it for a heat haze or trick of the eyes. A coordinated team using spotters and communicating as incredibly hard to take apart, especially as the Predator is so damn squishy. It definitely bleeds, and they can definitely kill it.

Using the plasma caster requires the target to either be on a direct trajectory from your position or standing still, so of course human players don’t move like AI, and instead zigzag around like headless chickens. Sustained gunfire wrecks your health bar and messwa with your vision, and using cloak while already being tracked is useless. The fireteam can also cover themselves with mud to block heat signatures for a while, which is a weird option when they’re not supposed to know they’re being hunted by body heat.

You can unlock various weapons and tools from the movies such as the net launcher and retractable spear, but the same issues persist. Getting close enough to the fireteam to make any real use of these items is incredibly hard. It’s often easier to stay hidden until the last few minutes when they’re heading to the extraction point, where there’s limited cover and they have to wait for the helo. At this point it’s like a shooting gallery, albeit one where the ducks are strafing like crazy and shooting back.

I actually had more fun as a soldier than as the Predator. Its incredibly tense having to watch the trees while trying to focus on your mission, patching yourself up as quickly as possible when injured because the mission clock and the threat of the Predator mean you ain’t got time to bleed in the mud. You’re constantly moving, seeking cover, always aware of where your team is. And when the Predator finally makes its entrance, its usually loud and frantic and scored by explosions and horrified screams. During the beta, I encountered few players who really knew what they were doing, but going up against a player who knows exactly how to control the Predator could be exceptionally good.

Elsewhere it’s business as usual for an online multiplayer game. There are dozens of weapons and mods to unlock by leveling up, and even more cosmetics to buy with in-game credits or find in Field Lockers (or loot boxes, to you and me). The beta was very generous with these boxes and the currency to unlock them, but given the speed with which I was earning cosmetics I highly doubt this system won’t be heavily yanked in the other direction.

Speaking from experience I’d say there’s not enough time between now and the projected April 24 release date to fix the issues with the build. The frame rate struggles a lot, and the physics and AI are both lacking polish. The environments, while predictably all stretches of jungle, are dense and detailed, with a wonderful verticality that allows the Predator to survey for miles around. There’s no doubt that considerable effort has been put into the development of Predator: Hunting Grounds, but it does feel imbalanced. Regardless, as with Evolve, I can see this developing a strong core player base who’ll learn every trick and tactic. It’s an exciting, tense experience as the fireteam, though slightly underwhelming as the Predator until you’ve mastered the art of making trophies of men.

Still, many will come just for the atmosphere. The iconic score and the unmistakable ambience are on point, and for some that will be enough to bring them in, if not to keep them invested.

Senior Content Editor Mick has been playing games for over 30 years and writing about them for around 12. After drifting from site to site for a while, settling briefly at the now-defunct Made2Game and freelancing for the gone-but-not-forgotten NintendoGamer Magazine, he came at last to rest at Godisageek. Mick has been a reviewer, staff writer and content editor here for some time, while also moonlighting a little for Red Bull Games. He has 4 kids, has written 2 novels, and sometimes even manages to pay a bill or two. You'll usually find him defending the galaxy in Destiny 2, battling evil in Diablo 3, or lurking in the background on Twitter. Find him there @Jedi_Beats_Tank, or on XBL (JediWaster247), PSN (Jedi_Waster) or Nintendo (JediWaster).
MORE LIKE THIS
beta impressionsILLFONICPredator: Hunting GroundsSony