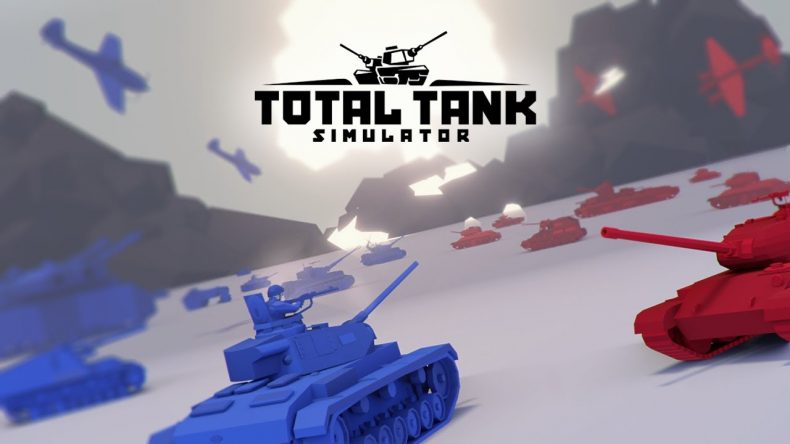 Simplicity can be awfully deceptive. As a tactic in warfare, making one’s enemy believe you’re little more than a simpleton when in fact you’ve spent considerable time, energy, money, and expendable manpower laying an incredibly devious trap is very clever and effective. That is, as long as you know your limitations and, of course, aren’t in fact a simpleton.

Total Tank Simulator from Noobz From Poland, as an example, is very good at looking simple while simultaneously being a super clever little bugger with a lot more going on than an outsider might suspect. It’s also full of blocky colourful tanks, tiny identikit soldiers and paper-craft environments, all of which conspire to disguise the fact that it is an absolute engine of death and war and carnage. Seriously, the bodycount in this game is nothing short of staggering. I had a moment during one match that reminded of that bit in Saving Private Ryan where the shellshocked soldier is wandering around looking for someone to reattach his severed arm, as all around me my compatriots were reduced to squibs, exploding tanks showered me with twinkling shrapnel like confetti, and a fighter plane screamed overhead, trailing black smoke like party streamers before slamming into a nearby farmhouse.

But, y’know, all colourful and twee.

Essentially Total Tank Simulator is a fast-paced RTS. Matches take place between various nations and comprise of a planning phase where you position your tanks, troops, planes, artillery, etc, and then a battle phase, where both sides proceed to blast the absolute snot out of one another until one is nought but a collection of smears on yonder hillside. You are able to zoom around the battlefield like a disembodied ghost, watching the action unfold below like a morbidly fascinated albatross, or get right into the thick of the fight. Initially, this had me a little confused. I thought all I had to do was position my army and watch the battle transpire. As I went in all cocky and condescending and didn’t bother with the tutorial, I had no idea that clicking the right mouse button would transplant me directly into the driver’s seat slash cockpit slash cranium of any unit I moused over. I found myself staring down the barrel of an unfortunate infantryman’s rifle, for about 30 seconds. As no unit lasts very long, I was spat out fairly quickly like an apostate spirit and left to look for the next doomed wretch to possess in the roaring heat of bloody conflict.

Jumping into any unit presents you with a suite of controls. You can drive tanks, fly planes, run around as a rifleman, a sniper, a flamethrower unit; you can drive the repair truck or man the anti-air artillery. It’s not just rudimentary stuff, either. For instance, soldiers have first aid kits and grenades, back-up melee weapons, and Molotov cocktails. There’s a lot going on, a lot to get to grips with, and very little time to settle in before something is shooting at you or bombing you.

The beta only allowed play as either Germany or the USSR, but offered a taste of the campaign as well as Shadow Mode and Sandbox Mode. Sandbox in particular is fun, as you can select your biome, terrain, number of opponents, and how much money you begin with, which in turn determines how many troops and vehicles you can field.

In-between matches you can spend currency unlocking new units or upgrading existing ones, as well as hiring Officers to help direct the flow of combat and make your units stronger or more durable.

Total Tank Simulator, then, is an enjoyable, highly addictive little strategy game that hides its depth and intelligence behind a veneer of bright colours and charming papercraft. For anyone who likes a nice, loud ruck or, indeed, aficionados of large-scale tactical warfare in general, TTS is absolutely one to watch.

Senior Content Editor Mick has been playing games for over 30 years and writing about them for around 12. After drifting from site to site for a while, settling briefly at the now-defunct Made2Game and freelancing for the gone-but-not-forgotten NintendoGamer Magazine, he came at last to rest at Godisageek. Mick has been a reviewer, staff writer and content editor here for some time, while also moonlighting a little for Red Bull Games. He has 4 kids, has written 2 novels, and sometimes even manages to pay a bill or two. You'll usually find him defending the galaxy in Destiny 2, battling evil in Diablo 3, or lurking in the background on Twitter. Find him there @Jedi_Beats_Tank, or on XBL (JediWaster247), PSN (Jedi_Waster) or Nintendo (JediWaster).
MORE LIKE THIS
Noobz From PolandTotal Tank Simulator