Drive Buy, a new vehicle combat game, is coming to PC and Switch 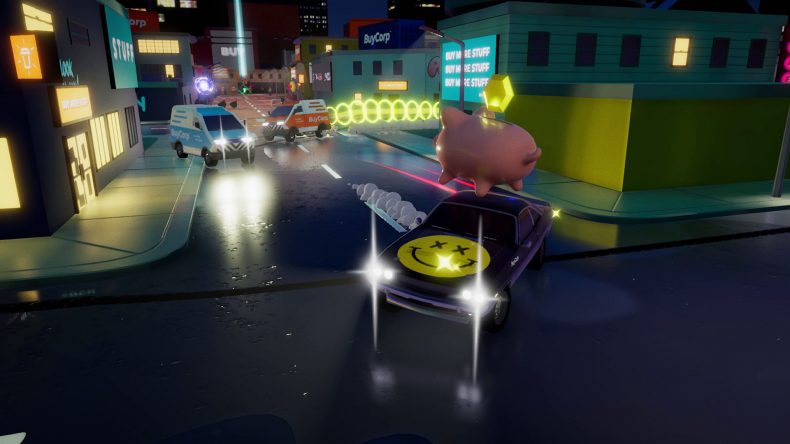 Drive Buy comes with cross platform play for Switch and PC players. So you won’t need to worry about you and friends having copies on the same platform. Online play also supports up to 4 players online.

When you dive in for an offline or online game you’ll be greeted by the following three game modes:

The longer you hold the pig the more points you score. However everyone will be gunning for the pig so you’ll need to avoid other players.

Along with the above game modes you’ll have 6 characters and vehicles with unlockable cosmetic items for every character.

“Playing  LAN matches with my dad and brother were some of the highlights of my childhood, moments that I found it increasingly difficult to recreate as the ecosystem of console became so complicated, so when cross-play became a reality, I wanted to get make a game which fully exploited its potential for fun” commented Max Scott-Slade, co-founder of Glitchers.

“At  its heart, Drive-Buy is a vehicle-based party game with intuitive, pick up & play controls, we wanted to create an experience which avoids the frustration of track-based racing games – hence a street-based delivery battler was created!” added Hugo Scott-Slade, co-founder “We want  everyone to be in with a chance of winning – so even the player in last position can turn it around and steal a last minute victory. Or they can flood the leader’s screen with emotes and emojies to get revenge”

Drive Buy will be heading to PC and Switch in July 2020.