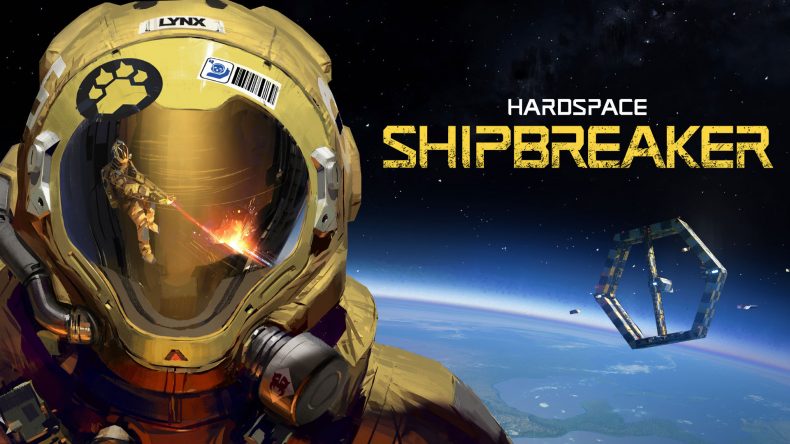 Have you ever had that dream where you can fly, only it’s not really flying like the way Superman flies or a bird flies, it’s more a feeling of weightlessness, like you’re in a bubble that you can somehow control with an effort of will, and it feels so real and so simple you wonder for a moment after waking why you can’t just do it? This is the same feeling I got while playing Hardspace: Shipbreaker, the new Early Access title from Blackbird Interactive and Focus Home Interactive, and one of the reasons I can’t put it down. There aren’t many games that have nailed the feeling of zero-gravity, but Hardspace gets it bang on.

You play the role of a rookie Cutter; that is, a salvage engineer whose job it is to break apart derelict space craft and cash in their various materials. Hired by a company called LYNX, you essentially buy your right to the role by taking out a billion dollar loan, which you must then pay back by completing salvage jobs. The more you complete, the higher you’ll rank, and eventually you’ll be taking on huge dreadnoughts for days at a time. Initially you work day-long shifts, which begin with you launching, in your self-efficient spacesuit, off the platform of the Master Jack, the habitat where you spend your nights. The Jack is connected to a huge salvage barge equipped with an energy net, and a pair of ore processors and blast furnaces. Before you, silent yet filled with opportunity, lies your target, an abandoned spacecraft ripe for picking clean.

It takes a moment or ten to get the hang of the movement. Since you’re in a zero-gravity environment, movement and orientation is handled by your suit’s thrusters, which can take you forward, up and down, or rotate you. You can also brake to come to complete stop, and grip to the side of ships and structures to pull yourself along by your hands. The sense of scale is at first a little disorienting. The ship looks tiny, as does the platform of the Master Jack from above, but as you move closer you realise it’s all about perception, as you can – and will – get inside the ships to salvage power cells, reactor cores, thrusters, engines, cargo crates, even seats and furniture. You’re guided by Weaver, a veteran Cutter who advises you from afar, and your suit’s onboard AI that does little but inform you when something can be salvaged, or when your oxygen or fuel is getting low. A shift lasts for about 15 minutes of real time, during which you’ll feel remarkably alone, with nothing but haunting radio music in your ear. Below you, the Earth is displayed in all her glory, while above, the black sky is peppered with junk, debris, discarded ships, abandoned space stations; a veritable junkyard, or a veritable treasure trove, depending on your point of view.

You are equipped with an environment scanner which at first only highlights potential cut-points but which you can upgrade to give you detailed information on your targets. You also have a cutting tool called a Stinger and the Grapple, which will come to be your best and only friend on the job. The Grapple, like most of your tools, has multiple uses. For one, you use it to latch to surfaces and pull yourself close, which is handy if you have an accident and find yourself drifting or disoriented. But it can also attach energy tethers to salvage, which can either link items together or drag them, absent your oversight, to a specific place such as the net, furnace or processor.

There are plenty of upgrades to unlock, and learning to move around and switch tools quickly is essential. While failing to complete a work order isn’t fatal (on some jobs you can come back for multiple shifts, while on others you’ll simply lose your salvage opportunity and thus risk failing to meet your minimum payment to LYNX), there are hazards that will absolutely kill you. Oxygen and fuel must be monitored, and if you get low on either one you have to make a trip back to the Jack to spend your money to refill the tanks. Failure to do so will result in death, at which point you’ll be cloned back at the Habitat and lose a substantial chunk of money. For instance, accidentally cutting through an airlock without correctly depressurising it will result in explosive decompression which can damage salvage and could either kill you or badly damage your suit – not to mention that the force will send you spinning off into space or, worse, into a furnace. Damage to your helmet will result in a crack in the visor, and will sometimes mess with your receiver, so you’ll pick up random radio stations for a while.

Once you get inside a vessel, the claustrophobic atmosphere contrasts starkly with the outside, and it’s easy to cut the wrong section and endanger a piece of cargo, or worse, cut clean through a wall and hit a fuel tank or reactor on the other side, both of which can explode and do massive damage to you and the ship. The trick is to remain calm and, if you have a few days on a specific job, take your time. As a result, Hardspace can swing between super tense and incredibly laidback, and because you’re constantly having to adjust your orientation, move against the clock and yet move relatively slowly, and be mindful of sending different salvage to different places, it becomes surprisingly immersive. There are even data logs here and there containing a little lore or backstory on LYNX and the industrialised future in which Hardspace is set.

Based on the early build I’ve played, Hardspace: Shipbreaker has massive potential. I can’t tell if the blocky, retro-futuristic screen text is placeholder but I hope it’s not. It puts you in mind of 70s and 80s sci-fi movies and, while there’s no alien menace or combat at all to speak, the atmosphere maintains an element of high risk thanks in part to this aesthetic. The way your screen buzzes with static when using your scanner, for example, does a great job at eroding your confidence in LYNX as an employer.

I hope to see more variety, though. At the moment the ships are all quite samey, and I think the option to customise certain elements like the Master Jack or your tools would go a long way to giving you a sense of ownership. But these are minor things and more down to my personal tastes than anything. As it stands, Hardspace: Shipbreaker is like nothing I’ve ever played, and absolutely has my attention.

Senior Content Editor Mick has been playing games for over 30 years and writing about them for around 12. After drifting from site to site for a while, settling briefly at the now-defunct Made2Game and freelancing for the gone-but-not-forgotten NintendoGamer Magazine, he came at last to rest at Godisageek. Mick has been a reviewer, staff writer and content editor here for some time, while also moonlighting a little for Red Bull Games. He has 4 kids, has written 2 novels, and sometimes even manages to pay a bill or two. You'll usually find him defending the galaxy in Destiny 2, battling evil in Diablo 3, or lurking in the background on Twitter. Find him there @Jedi_Beats_Tank, or on XBL (JediWaster247), PSN (Jedi_Waster) or Nintendo (JediWaster).
MORE LIKE THIS
blackbird interactiveFocus Home Interactive