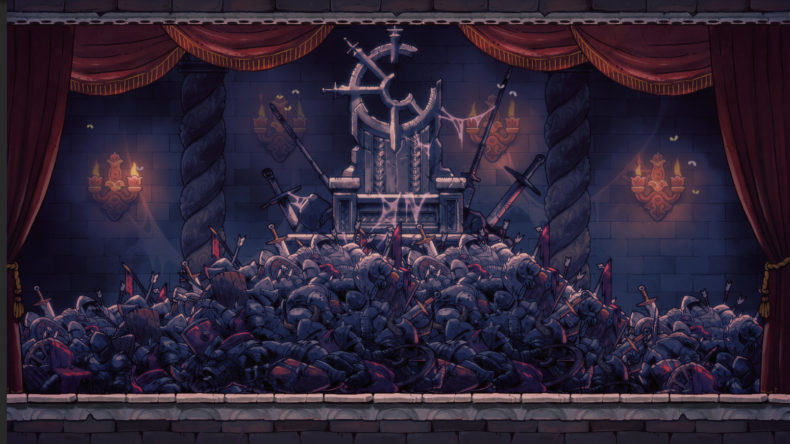 Nothing major, but the original Early Access date of July 23rd has been pushed back, meaning Rogue Legacy 2 has a new release date. The follow up to beloved roguelike-platformer-MetroidVania Rogue Legacy, a surprise PlayStation Plus hit back when it came to PS4 and Vita back in 2013, has been hit with a slight delay.

The new date, then, is August 18th, and the extra few weeks is to give the team chance to polish up what they call a game that is “already good”.

“It wasn’t an easy decision, but we are delaying the Early Access launch of Rogue Legacy 2 from July 23rd to August 18th”, Cellar Door Games said on Twitter.

“Game development is a lot like football. It’s weird, unpredictable, and we don’t know the rules. And just like football, when you get the ball, sometimes you’ve just gotta run with it.

While stabilizing the game for launch, we’ve run into some minor setbacks, but more importantly, some features got so close to completion that we just absolutely had to see them through. This means more content, more stability, and more bang for your buck come launch day” – they continued, which is great news, as everyone loves more content!

“In our opinion, the game is already good. But these extra few weeks will help us turn this football into a homerun!”.

It sounds like the dev team has been playing Dan Marshall’s Behold the Kickmen, to me, with all the talk of turning football into homeruns, and running with the ball. Unless it’s American Football, of course, which is not football, but handegg. Yeah.

Anyway, the game is bound to be good, right? We’re dying to play it as the first was absolutely superb. Bring it on! Check out the latest Early Access trailer, which almost certainly has the wrong Rogue Legacy 2 release date in it, but regardless, it looks cool.