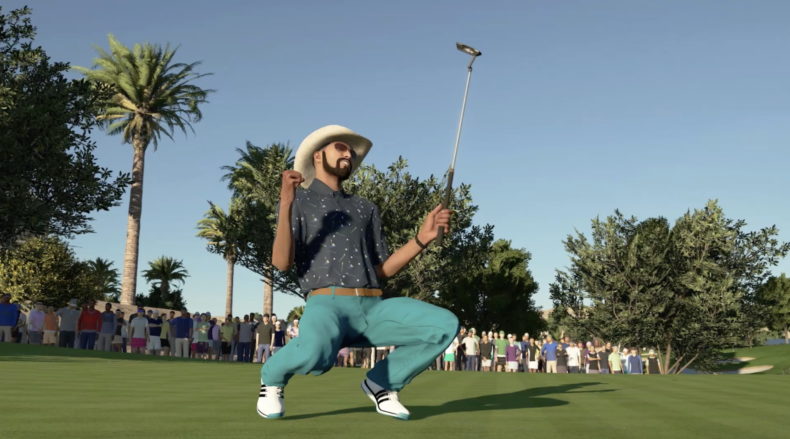 Judge me if you will, but I really like digital golf. I’ve played real golf and it’s fine, but when it comes to sport I’m more of a fan of sports that can result in injuries because of mistimed tackles. But I do love me some videogame-golf, and HB Studios and 2K coming back with PGA Tour 2K21 feels like incredible timing for me. Though, that said, it’s not really coming back per say, because as a series, The Golf Club has been around a while now, instead it’s the license that has changed hands, moving from EA to 2K, and frankly, it’s improved The Golf Club’s style no end.

The first thing I noticed as a lapsed golf gamer was how brilliant the swing stick has become with this new iteration. A constant learning process, you’ll see every swing rendered on screen not just with your avatar stroking the ball beautifully round a tree onto the green, but also with a visual aid that shows you whether you’re pulling the swing-stick right, left, and to varying other degrees. This is a real boon for all manner of golfers because even the seasoned pros out there become lazy when swinging a digital stick, and the on-screen aid will show you that suddenly you’re not hitting the ball as cleanly or as straight as you were four holes ago. On top of that, it’s easy to add draw, fade, top or backspin to the ball, and every indicator is clear about the effect these things have on the ball. It will feel a bit “baby’s first golf game” for returning players, but the overall on-boarding is terrific, and everything feels intuitive and just, well, right. 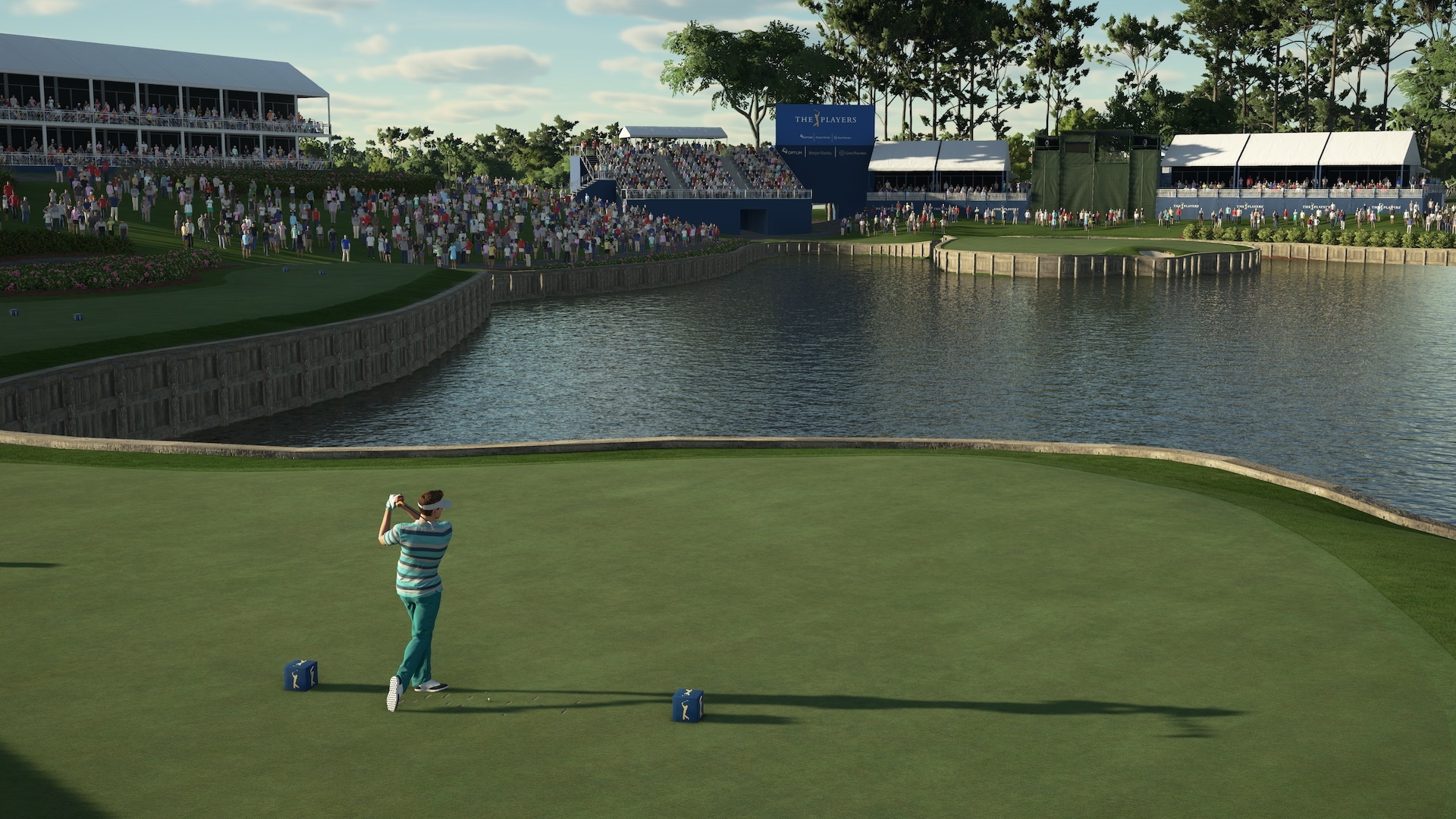 There’s an abundance of customisation options available that mean you can create your custom golfer (you won’t play as a real-world pro in PGA Tour 2K21 but they will become your rivals) and kit them out to look however takes your fancy, but a lot of these are locked behind VC currency in the preview build I played. At this point I won’t bemoan the negatives of in-game currency, but I must confess I did quite enjoy the bonus objectives that would appear during a tournament that reward additional XP for meeting set circumstances (get on the green in two shots, get in the hole in one putt, etc), and they’d end up resulting in VC awards, anyway.

But the timing of the release, again… it feels somehow brilliant. The calm nature of golf at the lower level is replicated nicely in the early stages of the career mode. Fans will cheer and gasp as you get close to the hole or miss by a gnat’s whisker, and the commentary is not only brilliant, but responsive to the situations I found myself in. I lost count of how many times the ball would be in flight and one of the commentary team would say “he just needs it to bounce right, here” and it would, and I’d feel amazing because it almost felt like the lads were rooting for me.

I had been away from golf games for quite some time, in truth. But that first hole felt like magic. The putt was hard (and I used the test putt option to see how badly I was going wrong for it) but getting birdie on my first proper competitive hole back in the game caused me to actually punch the air. You should go out on a high, but then on hole 2 I was in the bunker, yet recovered for par. The overall presentation is such that it felt like this was my story, a narrative running through the golfing world in which young “Adam Cook” was without glasses, sexier, thinner, and had an overly sculpted beard, but also one where he was going to go through the ranks and become the best of the best, and it felt great. 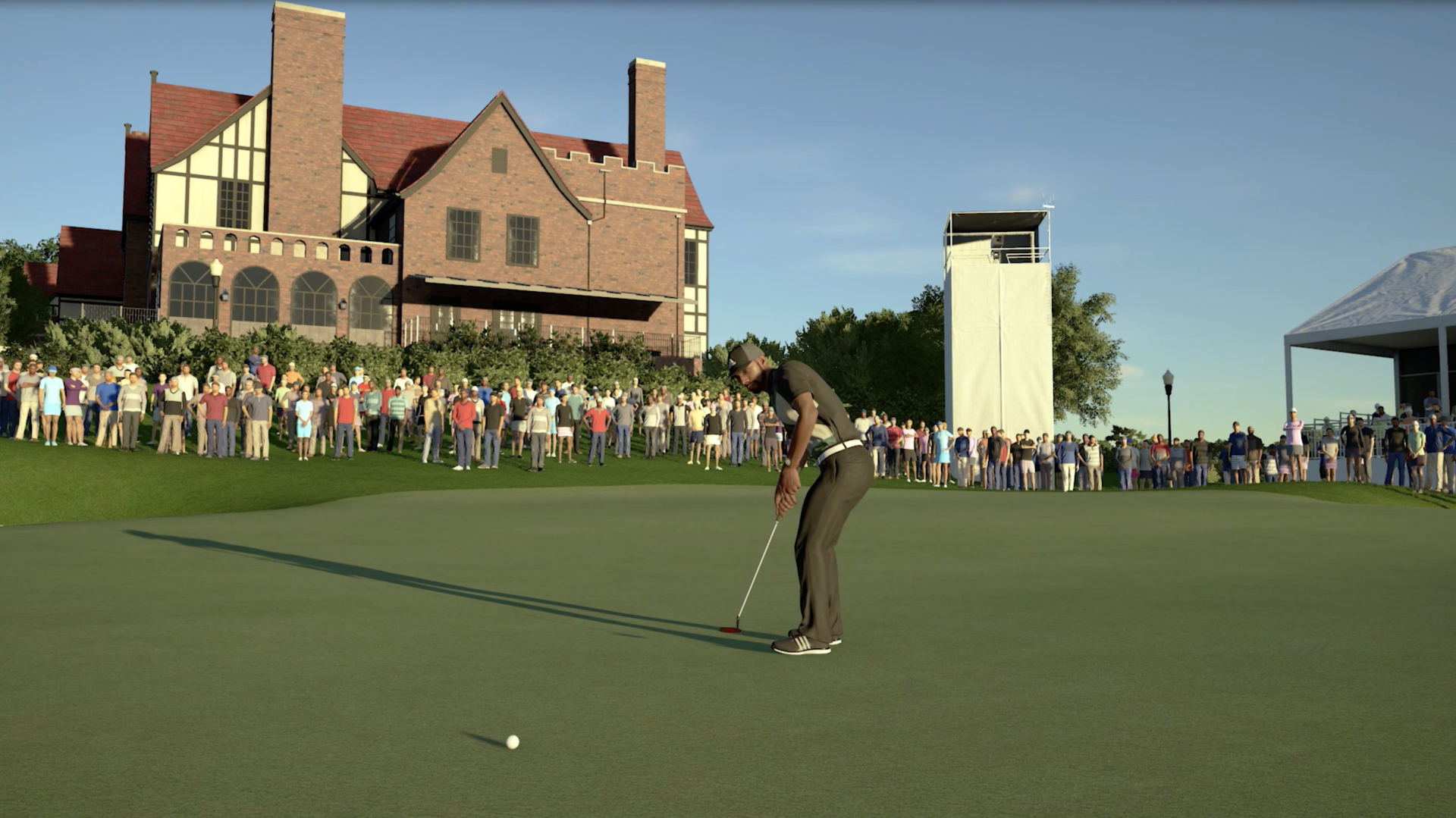 Finishing well under par on my first tournament, with a plethora of XP rewards for hitting goals and finishing first, was one of those moments where you realise you’re either in, or you’re out, and I am firmly “in”. The level-up bar will appear to a certain type of people (and it feels gamified in a way that may just annoy purists), the course-creator will surely inspire people to fill their courses up with squirrels and alligators, and avatar customisation will cause people to lose hours trying to get their look just right, but I get the feeling most wouldn’t have it any other way. Add to all of this a robust seeming online component full of modes for all types of player, and PGA Tour 2K21 seems like an impressive package so far.

My only concern is that it will be a mighty hard job to convince people this isn’t merely “The Golf Club 2020”, though when actually playing it, the presentation does a great job of doing exactly that. It’s hard to shake the feeling this is those games with a bigger budget and the backing of a licensed property, but that’s also a bit unfair since it’s by the same studio, anyway. Ultimately, and I suppose crucially, PGA Tour 2K21 feels superb. It has quality of life improvements that let you speed things up, but is also armed with a style that will make you want to slow things down and enjoy your story. I didn’t know I needed a new golf game, but with how smoothly it runs on PC and how fantastic it feels in my hands, I’m eagerly awaiting getting a hold of the final version and testing myself against the real world in a little GodisaGeek club, but also pushing my digital Adam Cook to become the champ.