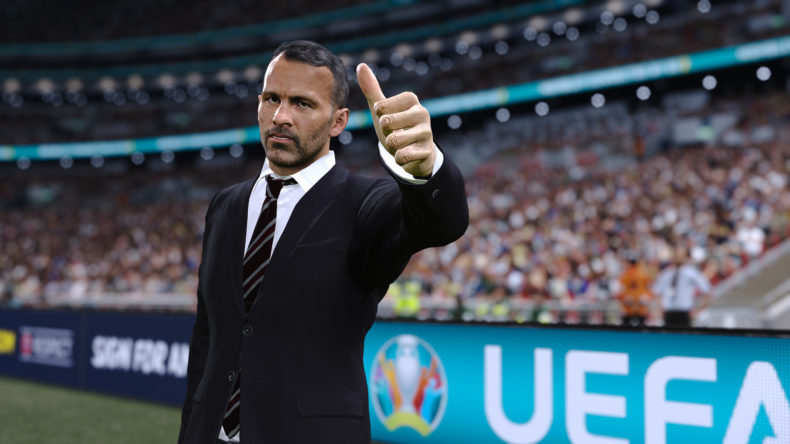 Two tribes of gamers have existed since the dawn of time. Or perhaps more accurately, since 1995. When it came to console football games, you were either FIFA or Pro Evo, EA or Konami. Forget Nintendo vs SEGA, this is the real console war. And for this handsome gamer, since the hazy days of FIFA 95, there’s really only been one winner for me. I’ve not even touched a Pro Evo game since, well, before Pro Evo existed. ISS 64 with its infamous mail merge commentary overflowing with enthusiasm was great, and it had menu and title screen music I can still hear to this day. But despite that, I’d keep coming back to FIFA throughout the years.

But with the PES 2021 update now released, I’ve decided to break my PES duck and return to a Konami football title for the first time in nearly a quarter of a century. Here’s how I got on, and what I discovered on my journey.

I should perhaps be clear before we go any further, despite playing FIFA titles for years, I am in no way a hardcore fan of the series, or indeed very competent at it. I spend a lot of hours on them each year, truth be told, but mainly online with mates, teaming up in the Pro Clubs portion of the game. Often I’m a CDM that can pass, occasionally tackle, and whose shot on goal from last night, is probably still rising into orbit. We’ve won Division 1, but it certainly isn’t plain sailing, and there’s lots of setbacks, laughs and banter along the way.

So with a slight sense of trepidation, I embark on PES 2021. My first foray into this strange new world was an eye-opening one. Yes, I went for the “Alternative” control scheme, just to give myself half a chance, and then went straight into an exhibition match to cut my teeth. I chose my team, Manchester United (feel free to berate me in the comments), and then picked a random team as opposition, ending up with FC Genk. A team that should pose a challenge, but hopefully one I wouldn’t be humiliated by. 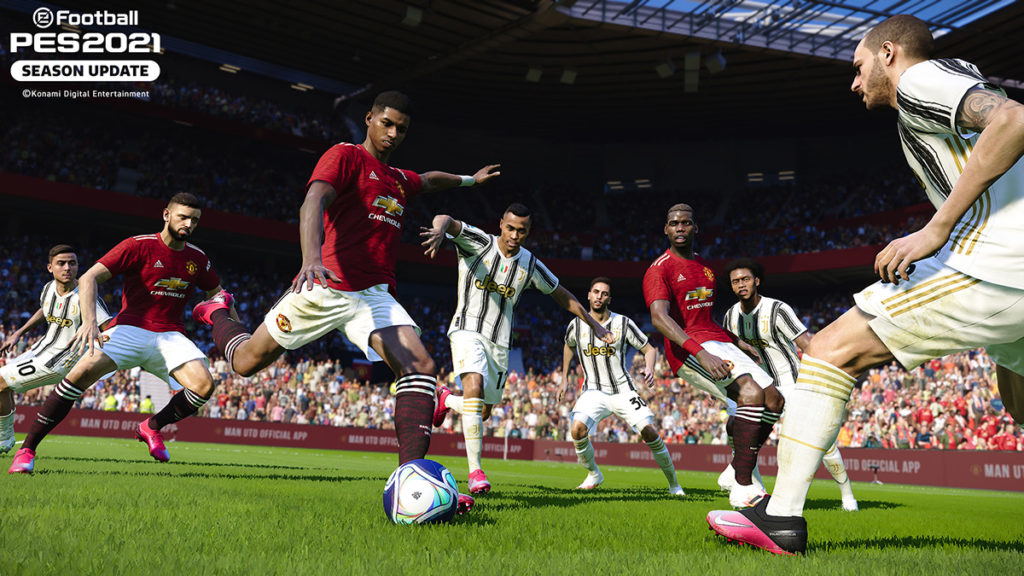 The match started very well, with me able to move the ball about relatively well. I settled into a rhythm and scored my first PES goal. Then another came, and then another, and I went in at the break 3-0 up, feeling rather happy with myself. Clearly my years of FIFA had paid off right? Well, not really, because either through incompetence or sheer complacency, I somehow ended up drawing that game 3-3 and feeling like a bit of an idiot. I still had a lot to learn it seems, some way to go to understand the nuances of how to play PES, rather than just playing FIFA in a different game.

So, in an attempt to improve my skills, I embarked on the Become a Legend mode. I created a new player from scratch to start my own virtual career with a team in the English Premier League. I went through the usual rigmarole of picking a hairdo and other extremely important specifications. A quick shout out goes to the 100+ different goal celebrations to choose from, helpfully just labelled as different numbers, meaning there was no way to know what each one was without watching them all separately. So I spent more minutes than I care to admit flicking through them all, looking to find something suitably akin to my Prancing Bird celebration from FIFA. Nothing really sufficed – cue an eye roll from me – and I just went with a random couple that caught my eye. My camp jubilations will have to stay on FIFA where they belong.

But now we’re onto the big point, who I end up signing for. Normally this wouldn’t even be much of a point, but it ends up being Leeds United. Now, for those unfamiliar with English football, let’s just say Manchester United and Leeds fans don’t get on. It’s a local rivalry that’s been around awhile, some, depending on who you ask, call it the Roses Rivalry, pointing back to the War of the Roses in the 15th century. So yeah, it’s a pretty significant divide with very little love lost between the two teams. Of all the teams to choose, I had to get Leeds. I actually got them twice because I had to restart when my game didn’t save properly. So PES 2021 clearly has it in for me, a clear mark against it. 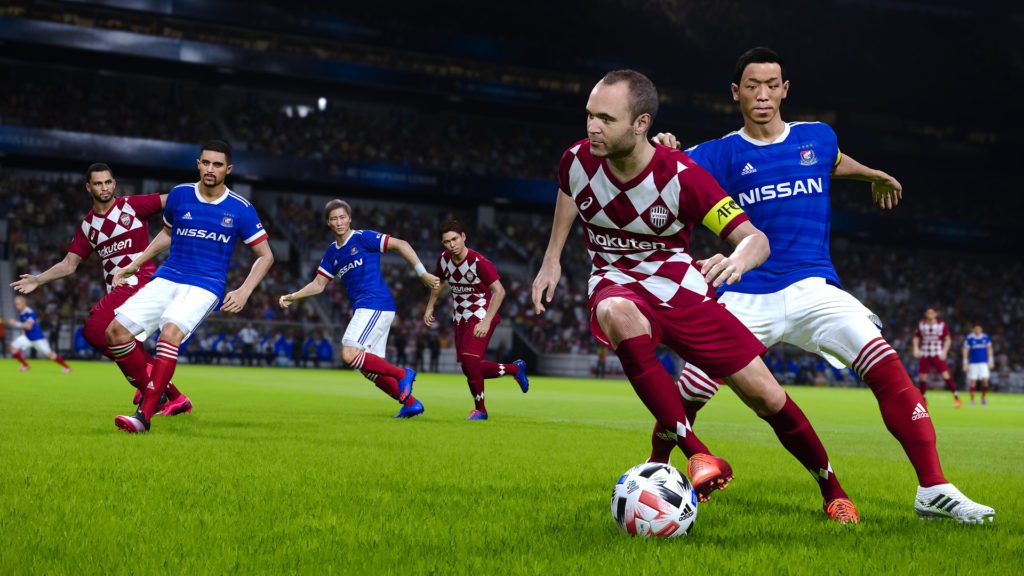 As with such things though, I rise above it and keep the grumbles to myself. I’ll show that pesky PES algorithm who’s boss, by actually becoming a legend in spite of playing for Leeds. And whilst that clearly hasn’t happened yet, given the time it takes to evolve your player over time, this mode really did teach me a few things about PES, and how it plays differently to FIFA. By starting out as an average player, it forces you to spot and notice the nuance, you often can’t just play your way out of trouble, it’s about understanding your options and the skill of both teams around you.

It certainly seems a little less forgiving in the stamina stakes for a start. Even when playing as Man United, I was finding players were getting tired if I would run with them a bit. I learned long ago not to overuse running, even in FIFA, but it felt more necessary here. And especially in Become a Legend because my Stamina rating wasn’t great. I would find myself jogging everywhere unless a real opportunity or need to run presented itself, and watching my stamina bar almost as much as the field of play, which feels like a significant inconvenience.

That said, it did bluntly force me to better appreciate my player positioning, especially in relation to those around me. As a CDM in my Pro team on FIFA, I’d be trying to do this anyway, trying to offer an option in the middle of the park. But there I’d be able to often box-to-box sensibly in a match, but not so in PES, unless I wanted to be in the red before the end of each half, running on empty.

The defending part of the game feels different too. If anything right now, defending, and being able to win the ball feels slightly easier in PES than in FIFA. Having a button input to pressure, and another to physically make a challenge feels more successful than jockeying in FIFA. The tackling didn’t feel quite so dramatic in PES 2021, a far cry from the excessive lunges that FIFA players would make in their bid to get the ball. 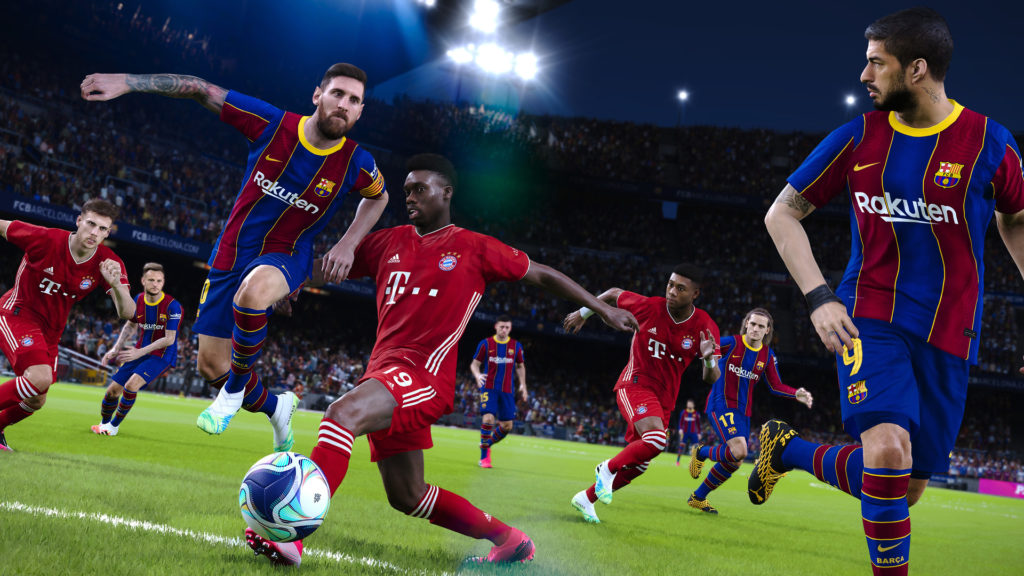 In terms of attacking, dribbling felt a little easier, and passing was solid, as it is in both games. Through balls seem to work a little differently, logic wise in PES, seeming to opt for the most forward player even if your intention and direction doesn’t imply that. You can obviously manually manage the direction should you wish, but I find more often that a through ball would work as my mind’s eye intended in FIFA, with a few more hiccups in PES 2021.

The AI is an interesting one between the two titles too. Defending AI seems almost scared of the ball in PES sometimes, which coupled with the ability to score from crosses with your head, can make for some great attacking moves or nervous moments at the back depending on where the ball is on the pitch. That said, I did get a sense that different teams played more distinctly, more akin to how they might shape up on a weekend afternoon in reality. Whilst this is sometimes true of FIFA, it felt more so the focus was on the individual players and their abilities than the cohesive whole of the team.

So lot’s of nuance and difference, but how did I feel after this little experiment? Well, what is clear is that there’s a lot of truth to the belief that FIFA is a more arcadey experience, with PES opting for a more simulation-style approach. If I had to pick, I’d likely stick with FIFA’s approach, but I certainly enjoyed my time with PES 2021, and I’ll definitely be going back to grow my Legend further. And perhaps my biggest take away is that there’s clearly room for both in my life. I even think playing both back to back has helped me improve, as I’ve had to train myself to consider different weaknesses in each. Don’t expect me to be challenging for any esports honours anytime soon, but hopefully, my FIFA mates notice I’m not as bad as I used to be. And don’t tell them I’ve been fraternising with the enemy to do so, they’d never let me live it down.