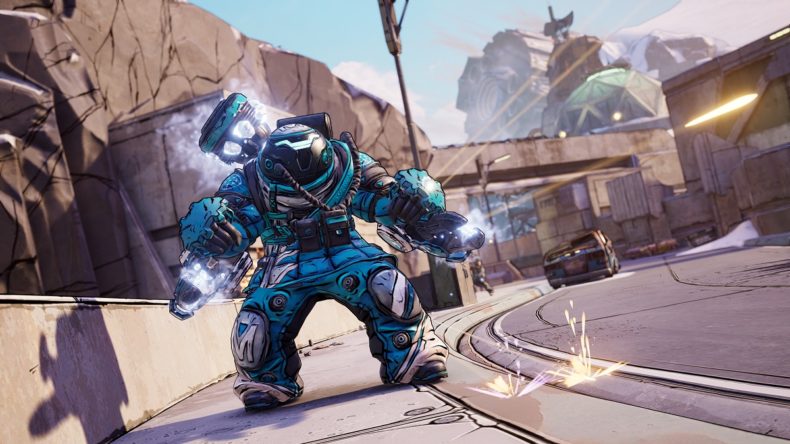 During The Borderlands Show today, 2K and Gearbox have unveiled two brand new editions of Borderlands 3, as well as exciting content coming to Season Pass 2. The latest episode announced Borderlands 3 Ultimate Edition, four radically reinvisioned Vault Hunter models, and the first look at the brand new Arms Race that launches on November 10 as part of the Designer’s Cut add-on.

The official synopsis for Arms Race reads, “Framed as a reality show hosted by Borderlands 2 Vault Hunters Axton and Salvador, Arms Race offers a roguelike experience that’s fast-paced, challenging, and consistently remixed by randomized elements. You’re stripped of all your gear, passive abilities, and Actions Skills and dropped into a new zone where you’ll have to get loot or die trying. The action takes place throughout the Stormblind Complex: an expansive, decommissioned DAHL military base set on a wintry island in a previously hidden corner of Pandora.”

Once you drop onto the island, you’ll race against the clock to grab the best gear you can, then get to the extraction point before the storm encroaches you. Arms Rce makes every loot drop meaniful, allowing players of all levels to enjoy. Along with a new set of Skill Trees, it will be included in the Designer’s Cut add-on. Today’s episode of The Borderlands Show also featured the reveal of the Multiverse Final Form cosmetics pack, featuring four entirely new character models. They depict how each Vault Hunter might have looked in an alternate universe where they never became Vault Hunters.

Video games are cool. Don't let anybody tell you any different.
MORE LIKE THIS
2kBorderlands 3Gearbox