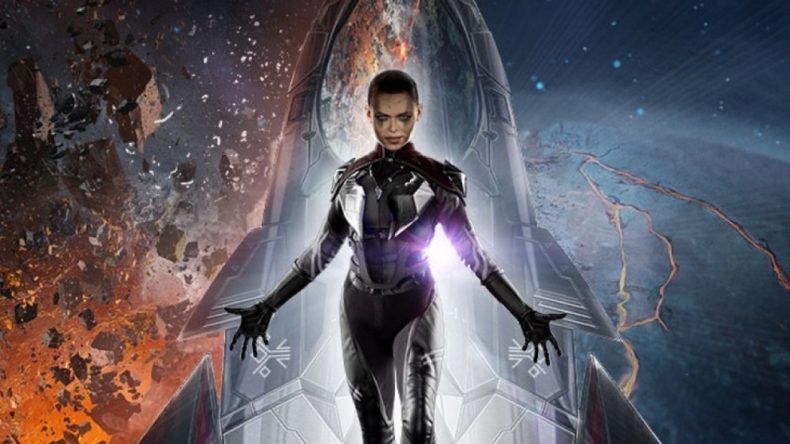 While titles like Everspace, Elite: Dangerous, and Star Wars Squadrons have been keeping the space fighter genre alive, they’re somewhat niche games. Even Squadrons, despite being a Star Wars game, was only ever going to truly appeal to dogfight fans. Even if the universe initially pulls them in, space fighter sims aren’t for everyone. The control schemes can be difficult to map to controllers, and it can be hard to convey an effective story because there’s often such a disconnect between the player and their avatar. So the big question is: how do Fishlabs, the developers of Chorus, hope to change that?

I recently got to sit in on a remote Q&A session with Fishlabs’ lead developers and designers as they gave us an in-depth look at their new space shooter. While there are things I’m still unsure (even after playing it) there’s a definite sense that they have a clearly defined vision for their game. For a start, they want to tell a story – and not just through a bunch of cutscenes and dialogue played over dogfights. 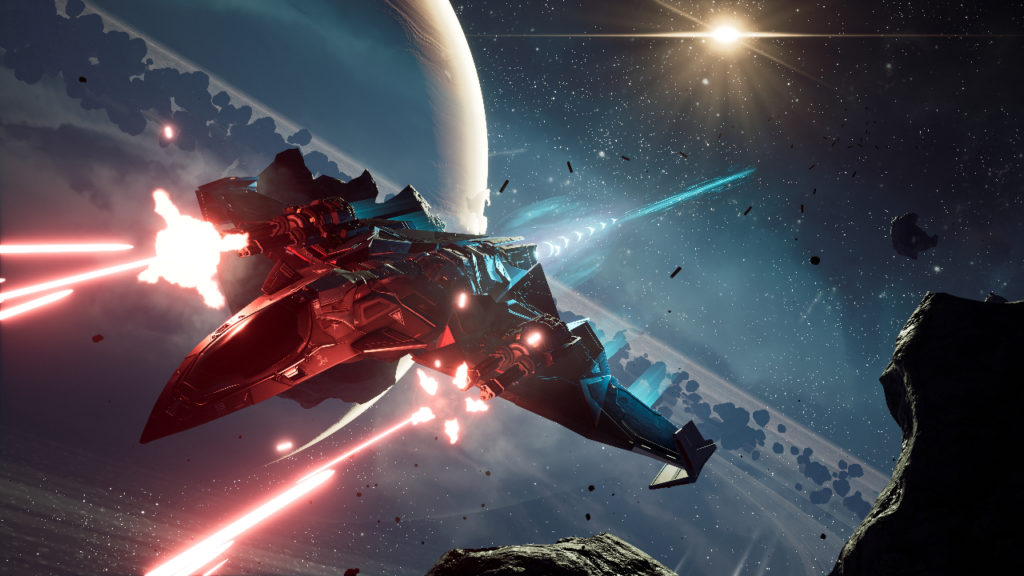 Everything about Chorus’ semi-open universe is designed to build on its own mythos. It becomes even more apparent when you’re in the cockpit, too. There’s a sense that each galaxy is lived in; these are more than just pretty obstacle courses to fly a ship around. The backdrops are striking, filled with things to see and wonder over – even if you can’t physically go there. As you weave through asteroid belts and between the structures of gargantuan space stations, it’s easy to be awed by Chorus.

It tales the tale of Nara, formerly a pilot with the tyrannical Circle. Having become disenfranchised with her former masters, Nara has turned renegade. She now helps the resistance fight back against their oppressors with the help of her ship, Forsaken, a sentient Starfighter that reminds me of Titanfall 2’s B2. The relationship between Nara and Forsaken is integral to the story, but also forms the basis for Chorus’ special abilities and character progression.

To call Chorus an RPG would be a step too far, but it does feature a progression system that sees you earning money and experience to upgrade Forsaken’s weapons and defences. There are also Rites, psychic abilities Nara can access to highlight targets and teleport through barriers, for example. The galaxy is also semi open, split into huge individual areas filled with side-missions and points of interest. 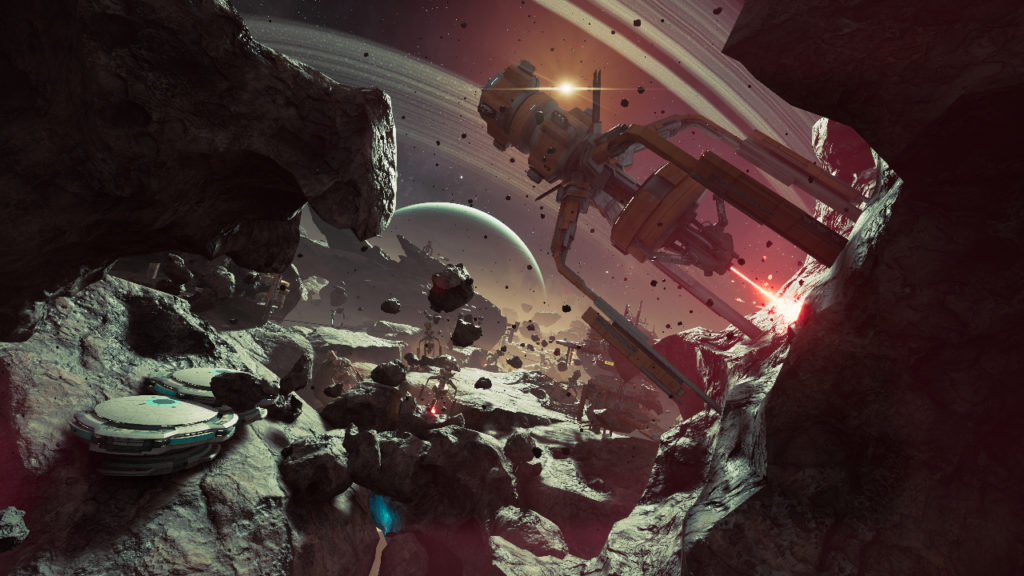 Rock and a hard space

Some of these missions might be simple escort affairs; others will branch into chains. There are also choices to be made that can affect relationships with NPCs later on in the game, leading to some characters giving their aid and others denying it. It’s not anything new, exactly, but it’s not something you see very often in this genre. Nara struggles with her own morality and the demons of her past, and it comes through in her conversations and interactions.

The demo I played was relatively short, featuring only a small handful of missions and spaces to explore. I played it through Steam, although it’s coming to both current and last gen PlayStation and Xbox too. Interestingly, Fishlabs have focused on gamepad control rather than HOTAS, as would be expected. It’s important to them that players have the same experience regardless of platform (although there will graphical improvements to next-gen versions such as 4K textures and higher framerates). 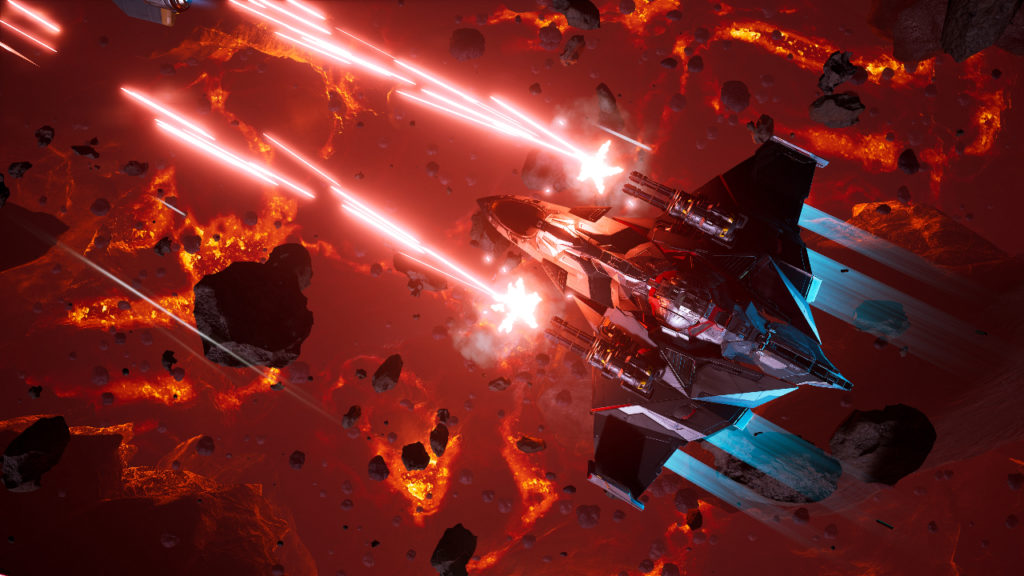 It always take me a while to start getting my head around controlling ships in space shooters, but with Chorus it felt easy. Steering is all in the right stick, while the left stick is used to control thrusters and perform evasive barrel rolls. Forsaken is equipped with a gatling gun, laser cannons, and missile launchers, each of which is stronger against a specific enemy ship shield type. There’s a wonderful smoothness to the way Forsaken controls; movement is slick and easy, with a pulled-back camera that allows you to take in as much as possible. Sliding between tight spaces and navigating intense space battles is easy and fluid, although I feel the difficulty needs to be balanced a little.

During the more frantic fights you’ll be taking damage from all side, and will often need to juggle weapon types to suit the situation. In these moments I felt Forsaken was too easily damaged. The repair function has a long cooldown while objective time limits are often short, which meant I’d often have time for just one heal even during intense conflicts. Perhaps this needs tweaking by the devs; perhaps I’m just not very good. Either way it didn’t ruin my time spent with Chorus, although having to listen to repeated dialogue every time I reloaded a save was a bit of a pain. 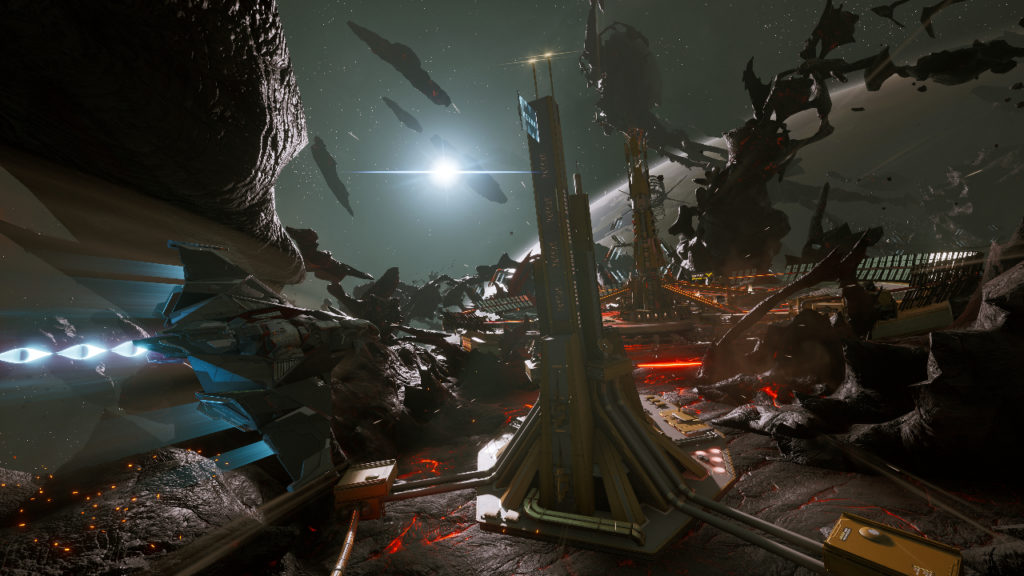 Where Chorus deviates from the standard formula is in its approach to story, missions, and exploration. There are Temples hidden in deep space that must be navigated using Forsaken’s full suite of abilities, not to mention the Drift system. Hitting LB will allow you to turn Forsaken on a dime while maintaining forward momentum, something hugely useful during dogfights but equally essential in Temples. These physical and environmental puzzles are almost like dungeons in a RPG, housing upgrades to Nara’s Rites and other useful items. There are no cosmetics to unlock, partly because Forsaken is as much a protagonist as Nara, but there are weapon upgrades and masteries to work towards to give you something to chase.

Built with a very clear end goal in mind, Chorus’ playspaces are gorgeous and easy to navigate. Even in the heat of battle, clicking the right stick will correct your horizon, but it goes deeper than that. The areas are designed with a clear divide between what’s up and down, what’s left and right. Even when you’re tearing around in all directions, it’s easy to stay centred and focused on objectives. Hitting the left stick will propel you forward at intergalactic speeds to eat up the distance between objective markers, but exploration has its own rewards. 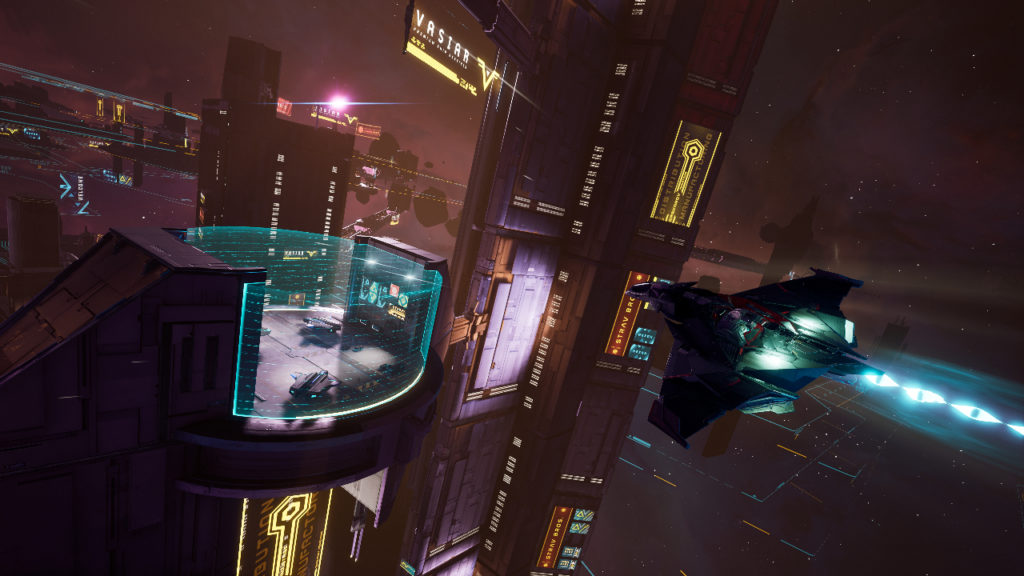 One of things focused on during the Q&A session was the music. Not because the devs necessarily wanted to discuss it, but because it was so unbelievably affecting that almost everyone there had a question about it. Composed by Pedro Macedo Camacho (Wolfenstein II: The New Colossus and World of Warcraft: Shadowlands), Chorus’ OST could be one of the year’s best if what I’ve heard is anything to go on. Sweeping orchestral music lends the game a sense of otherworldy grandeur that fits so well with its near-mystical lore.

Playing through the demo left me wanting more. A lot more. How Chorus holds up in terms of variety and, well, staying power, remains to be seen. It’s easy for games in this genre to burnout without a constant flow of new content like Elite or even No Man’s Sky, and while there’s a good spread of missions in the demo, we’ll need more to keep us truly hooked. But aside that, Chorus is looking like it could be an exceptionally fun game. The mix of exploration and space magic, the high-quality visuals and soundtrack, the simple control scheme and smooth combat – these things have me super excited to play more and see just what Fishlabs can do.

Senior Content Editor Mick has been playing games for over 30 years and writing about them for around 12. After drifting from site to site for a while, settling briefly at the now-defunct Made2Game and freelancing for the gone-but-not-forgotten NintendoGamer Magazine, he came at last to rest at Godisageek. Mick has been a reviewer, staff writer and content editor here for some time, while also moonlighting a little for Red Bull Games. He has 4 kids, has written 2 novels, and sometimes even manages to pay a bill or two. You'll usually find him defending the galaxy in Destiny 2, battling evil in Diablo 3, or lurking in the background on Twitter. Find him there @Jedi_Beats_Tank, or on XBL (JediWaster247), PSN (Jedi_Waster) or Nintendo (JediWaster).
MORE LIKE THIS
ChorusDeep silverFishlabs