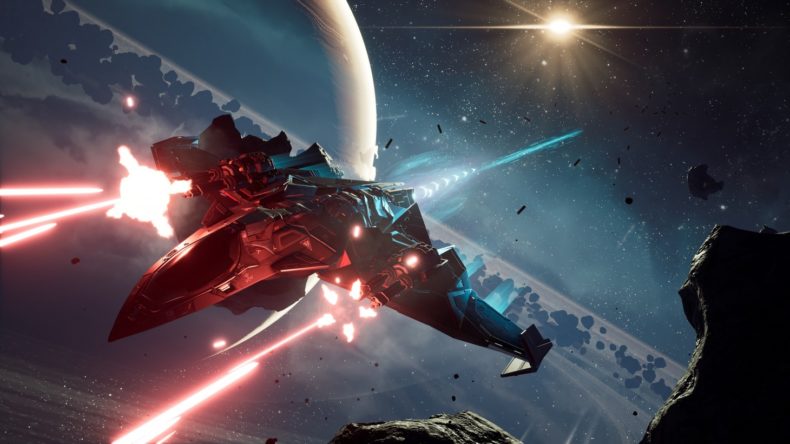 I first played Chorus a few months ago when the developer, Fishlabs, kindly gave us access to the demo after a preview event. My biggest issue then was that, despite its prettiness and narrative ambitions, it was held back by a stubborn difficulty and a little too much seriousness. Unfortunately, not a great deal has changed since then.

It tells the story of Nara, a gifted pilot who once served the despotic Circle as an Executioner. Alongside her AI ship, Forsaken (or Forsa), she spread the tyrannical will of the Circle throughout the galaxy, never questioning their immoral aspirations to unify the various colonies beneath a flag of fear. One day, after following a particularly despicable order, Nara became disillusioned and fled the Circle, abandoning Forsa and swearing to make amends somehow. 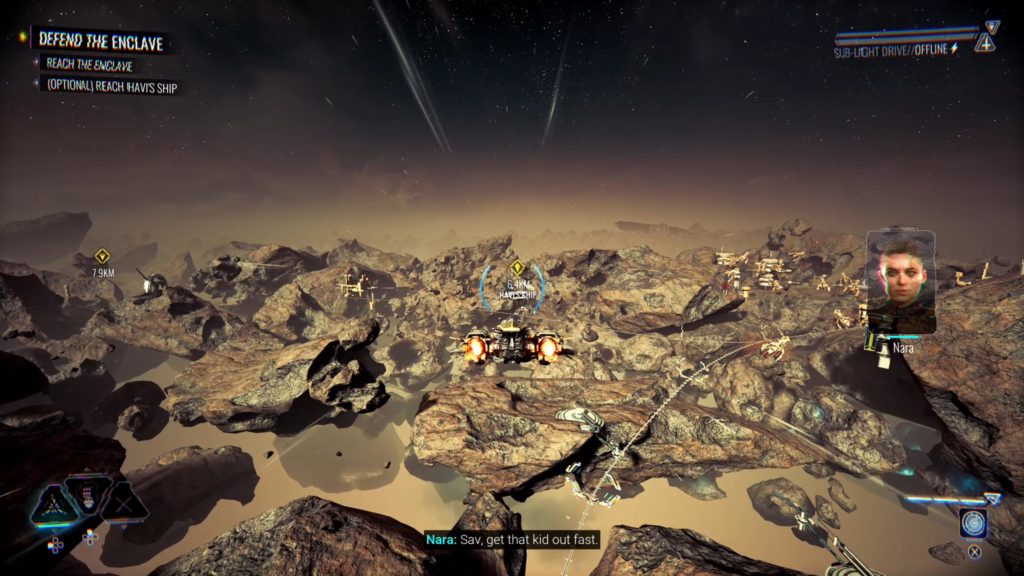 At the point where Chorus begins, Nara is working with the resistance. When the Circle catches up to her, she has little choice but to reunite with Forsaken and reawaken her lost powers. The marketing spiel about “Dual protagonists” is a bit of a reach. Nara is the protagonist, and Forsa talks to her. Often as a means of exposition. The problem here is that there’s little chemistry between them.

Chorus: A beautiful galaxy to shoot your way through

Fishlabs want us to feel the bond between Nara and her ship. They want us to feel it so badly that they repeatedly remind us that the bond exists by having one or other of them outright tell us it exists. What’s missing is real personality. They’re both so po-faced – Nara wrestling with her guilt and Forsa moping that she abandoned him – that there’s little levity and not a lot of compelling dialogue. It’s at least better than the way we’re given access to Nara’ s thoughts by her whispering them aloud.

But the story, capable but overly serious as it is, isn’t the main draw here. This is a space shooter, wihh each missiom seeing you following standard objectives to defeat enemy squadrons, escort allies, or destroy gun placements. Sometimes you’ll just be asked to find a specific location and search it for items of interest using one of Nara’s four pychic “Rites”. 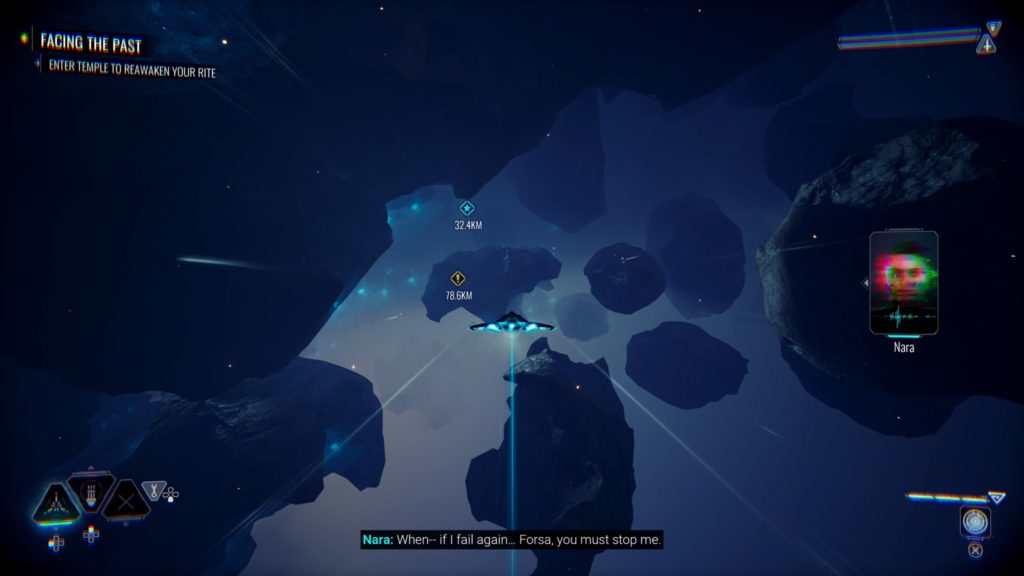 The galaxy is semi-open, each self-contained area granting you the freedom to either follow the story missions or divulge from the critical path to explore, find credits, points of power, Nara’s lost memories, or opportunities to help the resistance. Sometimes you’ll happen across allies under attack, or those that need you to track and return stolen goods. There’s a small handful of different objectives, but nothing that feels unique to Chorus.

That said, the Temples do feel like a departure. These ancient reliquaries house Nara’s forgotten Rites. Their tight spaces, deadly traps and many hazards make them tricky to navigate – not to mention the dark, oppressive presence that lurks within them. If you want to make it through you’ll need to master Forsaken’s Drift ability, and become comfortable flying at speed.

You can upgrade Forsa’s Hull, shields and weapons with materials and credits you find by stopping by at one of the numerous hangars, usually situated in friendly outposts. There’s no visual customisation, sadly, but you can earn upgrade Masteries by using skills and abilities repeatedly. 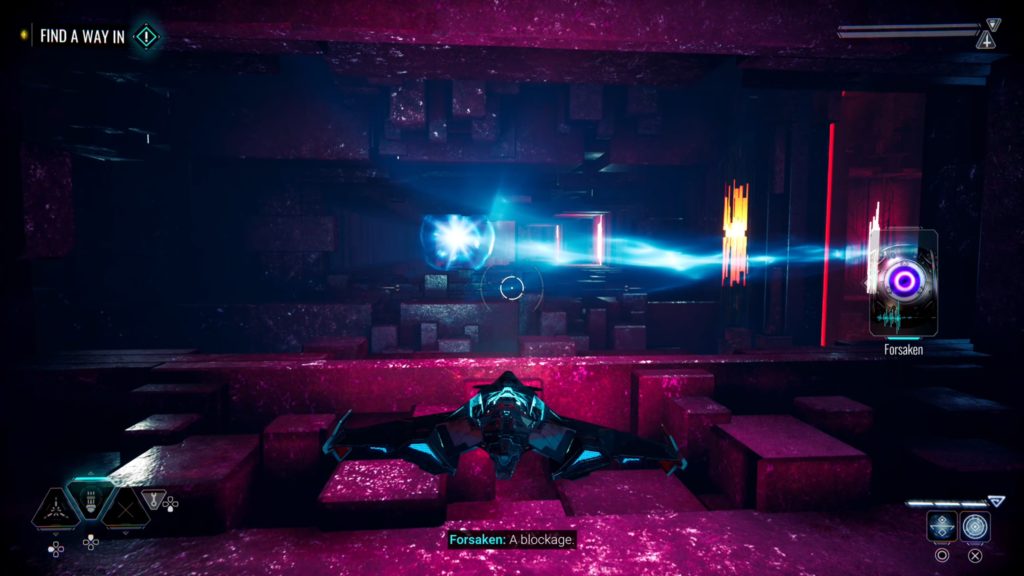 One thing Chorus really gets right is the aesthetic. Each area of the galaxy is stunning, with some of the most majestically beautiful sky boxes I’ve ever seen. Huge outposts hang in the ether, peppered with neon lights, massive gharish billboards and the twinkling lights of civilisation.The sense of scale is immense, as is the sense of space. There’s freedom to move in any direction, which is unusual even for a space sim. The shooting however, could be better.

There’s no persistent target lock, for a start, whether you’re using the gatling gun, laser or missiles, and until you’ve upgraded a fair bit your hull is like paper. It’s infuriating how easily you’re destroyed and how long it takes for your paltry heal mechanic to cool down. And maybe it’s just me, but I couldn’t get comfortable with the standard boost / drift controls. With the former on the left trigger and the latter on the left bumper, I found it hard to naturally transition between the two – which is utterly essential to survival. There’s no HOTAS support in Chorus, either, even on PC, which seems an odd choice. 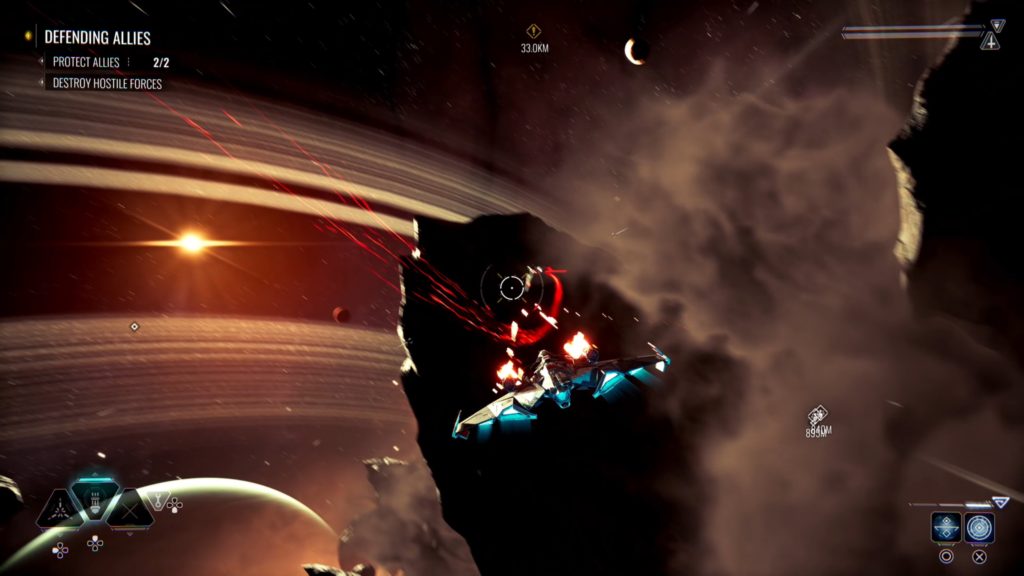 Chorus is not a bad game, but it misses some of the targets it aims for. Although you have a semi-open galaxy to explore, there’s little of note to discover. There are no cosmetics or meaningful collectibles, and Nara’s constant whispering about everything you do find becomes annoying quickly. The shooting is solid but unremarkable, and despite some glorious visuals and a memorable soundtrack by Pedro Camacho, there’s no much here to truly excite.

It doesn’t lean enough into the elements that make it stand out, and sadly just takes itself far too seriously most of the time. That said, if you’re a fan of Space shooters and haven’t had a decent single player dogfighter to get lost in since Star Wars: Squadrons, Chorus is worth checking out.

Chorus is a good-looking, competent space shooter, but it takes itself too seriously and doesn't lean into its uniqueness enough.