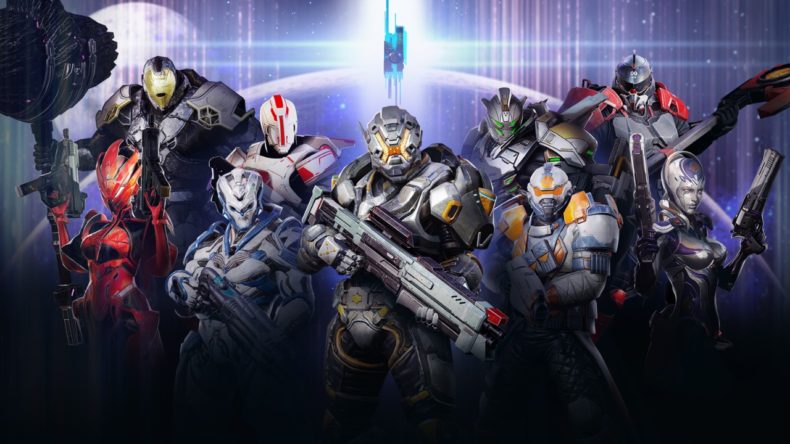 It can be difficult in today’s saturated market to find a really good roguelike. Their mechanics have permeated so many other genres these days that the words “with roguelike elements” feature somewhere in the description of so many games it’s hard to keep track. But now and then you get a game like Anvil: Vault Breakers, that seems to know exactly what it wants to be and implements those elements almost perfectly.

Which is not to say that Anvil is a perfect game. It’s not; there are issues. But as an indie game by a fledgeling developer, it’s a fantastic example of something that does exactly what it says it’s going to do.

It’s set in the distant future, after humanity has spread through out this galaxy and others. In doing so, we have discovered the Vaults, alien reliquaries filled with vast treasures and technologies. Humans being the shits we are, it has led to intergalactic warfare and untold destruction. The titular ANVIL is a deep space agency that creates Breakers, remote-controlled battle suits designed to allow safe exploration of alien worlds and the uncovering of Vaults. 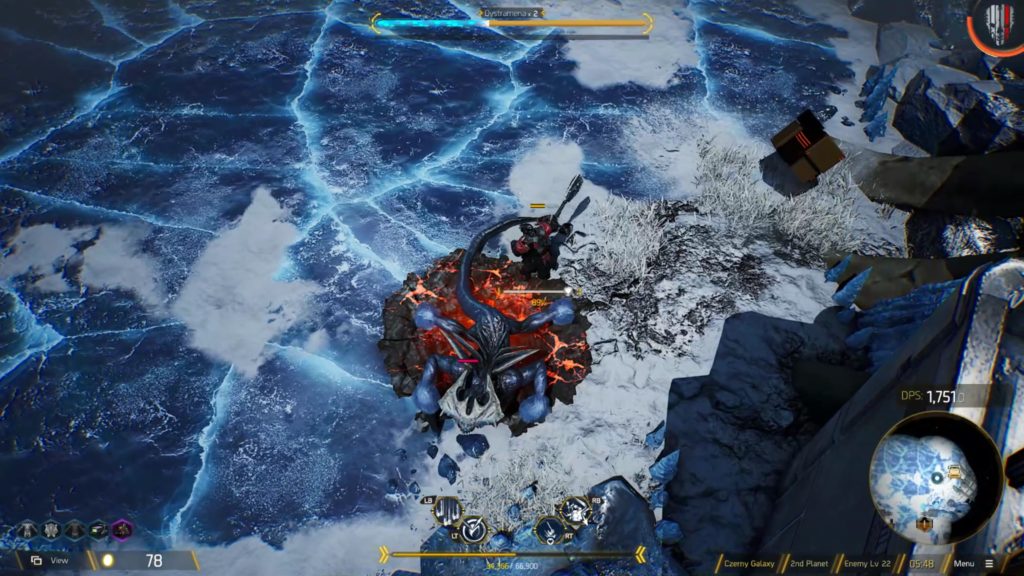 Using a system referred to as “Amber”, humans can pilot Breakers from light years away, enabling relatively safe excursions. When a Breaker is destroyed, it retains the combat knowledge it has gained, and is able to transmit data of some of the field upgrades it received. Essentially this is mumbo-jumbo that adds context to the roguelike set-up.

As with the best games of its type, Anvil intends for you to fail. In doing so, you’ll grow stronger, bringing back relics that you can equip for your next run, and unlocking ability points to universally upgrade your twelve suits – as well as currency to unlock more.

The Breakers are heavily remeniscent of Warframes, both in their appearance and in the four skills that each possesses. They are designed for synergy, as Anvil is fully playable in co-op. You have standard assault type suits such as the first one you’ll use, Jungler. Then you have massive melee-focused suits like Guillotine, and lithe, swift suits like Elsa and Shuri. 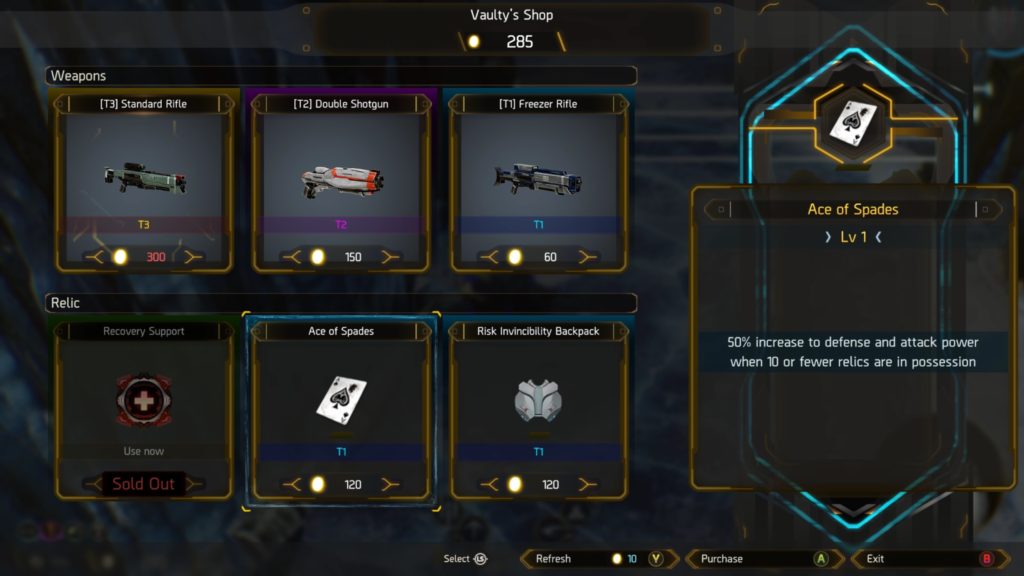 Some have heals, others have massively offensive abilities, others can drop buffs on the entire party or use skills to crowd control enemies. There’s no direct control over your Breaker’s skills as there’s no individual progression – the skills are what they are. Rather, you’ll earn ability points that slowly strengthen your Breakers, increasing their health and damage output, for example.

Each isometric level is procedurally generated from a pool of objectives, locations, and bosses. You can also find weapons and items throughout that allow you to change your playstyle. For example, you may start with an assault rifle but find twin uzis, a sniper rifle, or various shotguns. Weapon pick-ups only last for the run you’re on, though.

Some loot drops from enemies, while other items can be purchased with credits scavenged from fallen nasties at special kiosks. These are usually found outside boss arenas. Gear upgrades are scattered all over each stage, while you can increase your skills in a style similar to the one used in Hades. Upgrades to skills might improve cooldowns, or add new effects like health regen or damage-over-time for enemies. 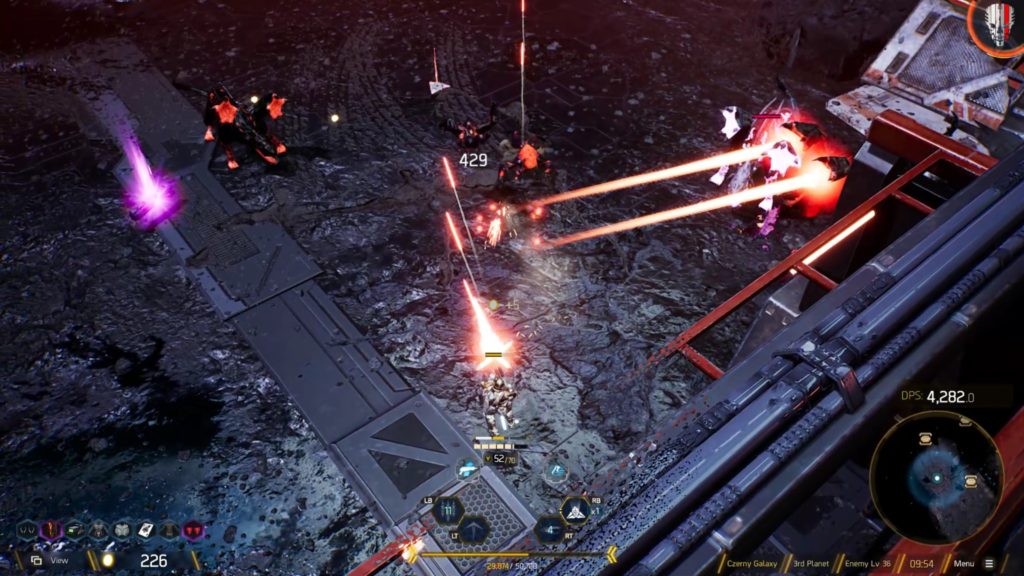 While Anvil: Vault Breakers doesn’t have the most unique set-up, the game feel is just superb. Special abilities feel weighty, the enemy design brings it close to bullet hell levels at times, and the variety in locations and objectives feels decent – although more will likely be added.

Each Breaker also feels different, even within their archetypes. While it’s certainly designed to be played with friends, you can go it alone, and your choice of Breaker will make a lot of difference. Jungler is great for dropping mines and using his melee attack to hold enemies back, while Shuri can drop a node that heals herself and allies in its radius. The melee-focused Breakers feel completely different too: boasting larger pools of health, they’re designed to get up close and personal, and have various combos that depend on how long you hold down the attack stick.

A twin-stick shooter with mapped special skills, Anvil is fast, stylish and satisfying to play. It does have a few issues, however, such as weird difficulty spikes here and there and the occasional area that just feels impossible solo. Of course, you can always level up and come back – that’s the beauty of it.

A constant timer counts down to a brief invasion by harder, machine-based enemies or the standard enemies getting a boost to damage and survivability. It never poses a huge problem, but adds an element of speed and danger to standing around too long. You’ll want to keep moving, finish your mission, find the Vault and reap the rewards.

We’ve yet to see how the battle pass system will fully work. At present, pre-Season, it rewards currency, ability points and skins for your Breakers. The currency can be used to buy more skins, unlock Breakers, or unlock and equip “toy workers”, little AI companions that come with you on missions to buff you. Once the game launches we’ll be able to fully test matchmaking and report on the state of the battle pass.

In the meantime, Anvil: Vault Breakers is a solid, stylish sci-fi action shooter that does roguelike gameplay right. It presents a stiff challenge that feels fair thanks to balanced progression, and enough randomly generated elements to keep each run feeling fresh and interesting.

Very tough solo
Not the most original concept