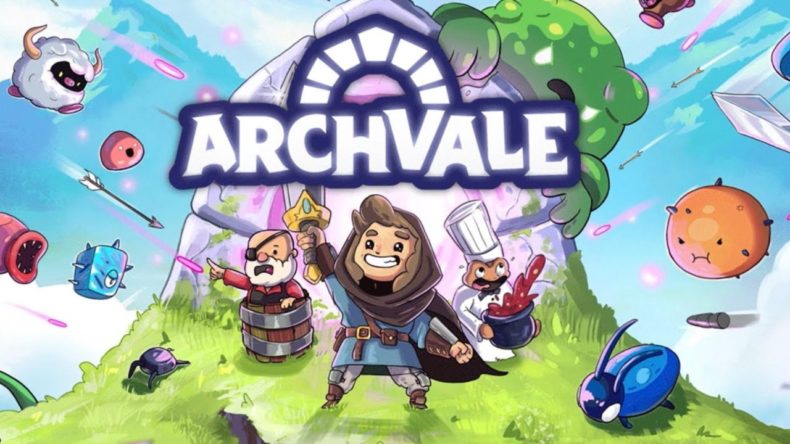 On the outside, Archvale looks like a twee little adventure game. It’s bright and colourful, and highly reminiscent of the early Legend of Zelda games (in that it apes them to a degree that almost goes past homage). But it doesn’t take long once you start playing to realise that while Archvale is all smiles and rosy cheeks on the outside, on the inside it’s a vicious little bastard that wants you dead.

Because Archvale is essentially a bullet hell game dressed up in the clothes of a top-down adventure. You visit places like Timberwell and Crabclaw Caverns, and fight cartoony, pixel-art monsters with swords and bows and magic – but the enemies can be relentless, and staying out of the line of fire requires an insane level of reflex and patience.

You travel a grid-like map, with each square a room, most of which contain something of note. It could be a chest with a new weapon, a Fountain at which you can heal and refill your health flasks, or maybe just a pile of enemies to kill and resources to gather. Ore and enemy drops can be turned into new weapons, armour and items in one of the towns, while other materials you gather can be used to upgrade your gear. 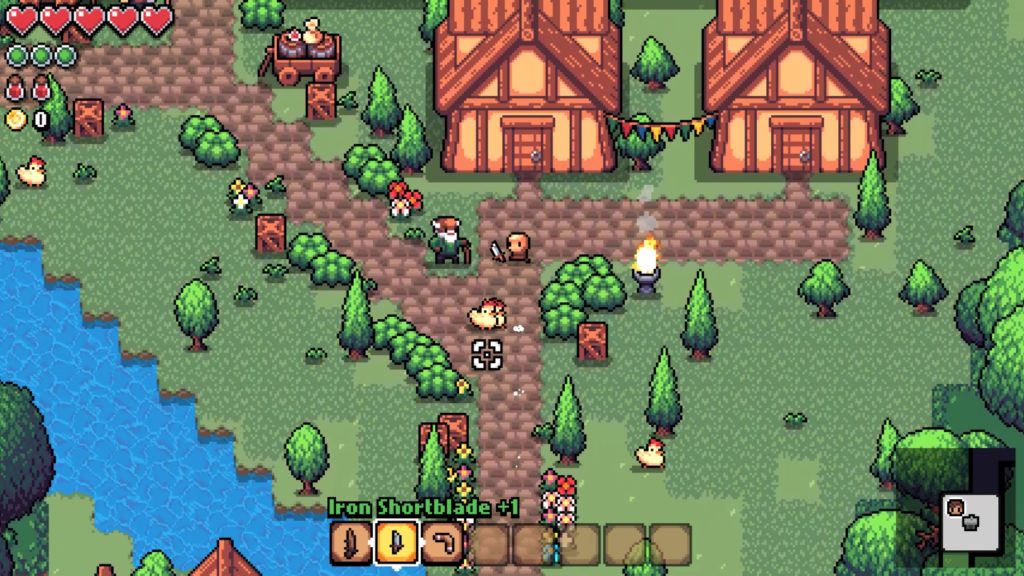 Rings, badges and blessings are also scattered about the place to give you buffs and advantages. Rings are equippable items, which you can only wear one of. Blessings are permanent buffs to one of your attributes and are usually found at new Fountains. But Badges are the important one. These alter small elements of the game mechanics and can be stacked.

The first Badge you find, for example, gives enemies a small chance to drop health on death. Another allows your arrows to track targets. Others increase magic damage, add an extra heart to your health pool, or alter your damage output. Initially you can only wear two, but you can increase that number as you progress.

Your quest will take you all over the kingdom as you seek out the Undying, a group of nasties cursed with immortality by an evil king. Each carries a part of the gateway to the titular land of Archvale, a mythical place of great power that holds the secret to restoring peace and balance to the world. 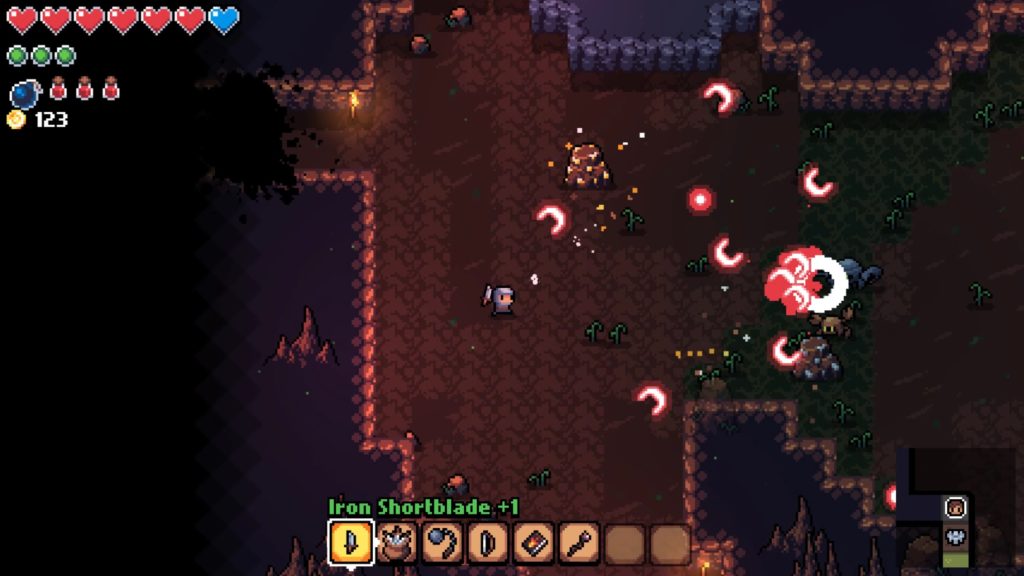 While talk of fountains and health flasks might make it sound like a Soulslike, Archvale isn’t quite that. Yes enemies respawn when you die or use a Fountain, and yes it’s incredibly difficult. But there’s no levelling up of your character beyond improving your gear, and although you lose all your gold on death you can’t go back and collect it from your corpse. So in fact, it’s slightly meaner than a Soulslike.

But it is fun. Most of the time. Dungeons offer new challenges and tough fights, but the boss fights reward you with decent loot that makes it worth the slog each time. For all its prettiness and, dare I say, familiarity, this is genuinely a bullet-hell game, and some areas are just an absolute nightmare. Almost all enemies have some form of ranged attack, often featuring multiple projectiles with distinct patterns. How you move and counterattack make all the difference. Trying to play Archvale like a hack ‘n’ slash will get you killed very quickly.

You’ll need to keep moving, attack when there’s time, and master the art of dashing. This gives you a brief invincibility window and allows you to reposition, while mixing in ranged weaponry or magic can be a great way to get some extra damage in fast. There are lots of weapons, from swords and spears to throwing knives, bows, magical tomes, staves and crossbows. You can only equip one at a time, but the others can be placed on a hotbar to allow swift changes. Sadly, armour can’t, so you’ll need to go into your inventory each time to change it. 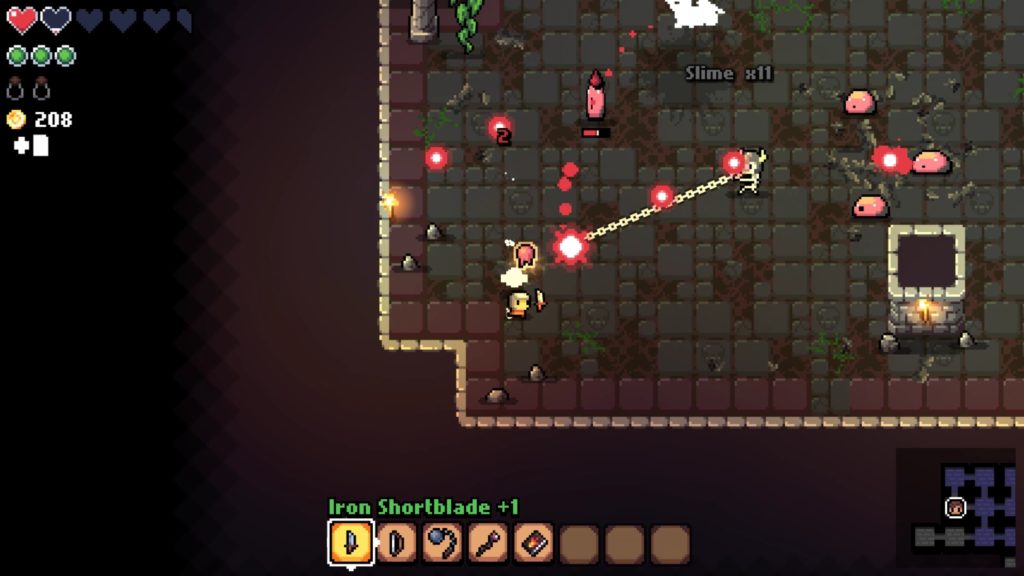 Here and there you’ll find special shrines that transport you into a little bullet hell arena, in which you’ll need to chase after blue diamonds while avoiding projectiles. Catch the diamond enough times and you’ll be rewarded with a new Badge. These are surprisingly forgiving early on, with failure only robbing you of a little life and allowing you to try again.

My only real complaint is that it takes a while to unlock fast-travel, and then it’s designed to jump you between areas rather than simply letting you travel from Fountain to Fountain. It would come in super handy instead of having to shlep all the way back to town on foot with respawning enemies to contend with.

Archvale is very tough. It will be too tough for some, I think, especially given its outward appearance. It’s got a great pixel art style, a real sense of humour, and a wonderful soundtrack, but it’s not a game for the faint of heart. It’s a constant challenge that offers constant rewards, and as such remains eminently playable even when it gets tough. Massive spikes in difficulty and the lack of a more convenient fast travel system hold it back from greatness, but it’s still an enjoyable, taxing little adventure with as much mirth in its heart as malice.

Archvale is an enjoyable, taxing little adventure with as much mirth in its heart as malice.