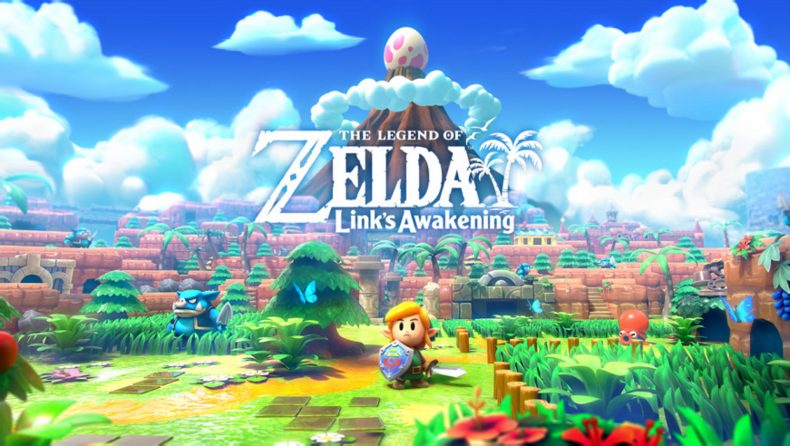 The warm and fuzzy feeling of nostalgia is not to be under-rated. Watching GOLD the other night, The Fast Show came on and I was transported to a time where people drank and smoked in pubs, and catchphrase comedy was king. For what it’s worth Paul Whitehouse is a terrific dramatic actor, and under-appreciated for it, able to inject an amount of pathos into things that would otherwise be missing. Link’s Awakening is pure nostalgia, that’s for sure.

The marketing campaign has been clever, showing middle aged men picking a dusty Game Boy up while that music drifts into your consciousness, creating an auditory illusion that makes you think that, just for a moment, you’re not an old bloke thinking of past glories. Luckily for Nintendo, Link’s Awakening (2019) is the same as it was in 1993: a rip-roaring success, and one of the best 2D Zelda games ever made.

For the uninitiated, The Legend of Zelda: Link’s Awakening followed from A Link to the Past’s mould, a top down game that sees Link adventuring around an island, finding tools and weapons in each dungeon that are helpful for the bosses that await his conquering. Where this remake (and indeed, the original game) differ slightly is that they eschew the usual Ganon and Zelda lore and instead, Link wakes upon an unfamiliar shore with only his Hylian Shield, sword, and green tunic to keep him company. To say more would be a great disservice to those of you new to the game, so adventure on, and discover the secrets of Koholint Island. Anyway, this Switch remake is entirely faithful to the ’93 original, which is excellent but may cause some to find issue with it. Those returning (like me) will remember the story beats, the dungeons, and the bosses, and that’s all fine – the new lick of paint is utterly gorgeous. Indeed, it’s hard to think anyone wouldn’t fall head over heels for the chibi-style aesthetic, but since you’re reading this on the internet, it’s certain someone will complain.

It’s a double-edged sword though, how faithful it is to the original. Link’s Awakening is from an era where you had to work things out yourself. Yes there’s a fast travel system, no it doesn’t take you right to the place you want to be; just nearby. But there are some obtuse quests that will have some reaching for their iPhone to check for a guide. Again, it’s great that the game is so faithful that those guides still make sense, but it’s bad for those who genuinely feel stuck. For those returning, I’ll simply throw these out there: the ghost, the frog song. You get the idea, and in truth, I’m pleased that a game is out there that requires you to explore and, frankly, adventure around Koholint.

What I’m not pleased about is some of the graphical issues present in Link Awakening 2019. It’s rare to say this of a first-party Nintendo title, but there’s a frame pacing, or frame-rate, issue in some of the larger open areas. It’s never enough to truly ruin your experience, but it’s surprising and, honestly, needs fixing. Either it’s more prevalent in the early game, or I just got used to it the more I played. So much time has passed since the original game came out that you’ll forget the side-on sections that bring other Nintendo characters into the fray. Goombas and Thwomps show up, and there are even some boss battles that use the side-on angle which, thanks to the new visuals, feel new despite the method of dispatching them remaining the same as it always was. Everything just looks and sounds so good, even the fishing feels addictive because you’re drawn in by the visuals.

Link’s Awakening isn’t the longest Zelda experience, and you’ll get between 10-15 hours out of it just doing the main story. You’d be doing a bit of a disservice to yourself if you ignored some of the side-stuff, though, as collecting secret seashells, trying to find heart containers, and the like, are well worth it. Also, make sure you do the trading side-quest as it yields a super reward. Oh and I’d suggest finding the boomerang too, and playing on hard. The story is nice, the island is brilliant, and Link’s Awakening is still one of my favourite Zelda games.

New to the Switch version are Chamber Dungeons. Entirely optional, it’s a nice idea in principle: every dungeon you explore has “rooms”, and once completed these collate into a larger pool of rooms you can stitch together, making your own dungeons with whichever boss you see fit to conclude it. Dampé the Gravedigger is the chap you’ll need to see to do all this, and you find him pretty early on. He sets you challenges which act as a building tutorial, and you can’t make dungeons that aren’t possible, which is nice. I’m sold on the idea of Chamber Dungeons, but not the execution. Ultimately, no matter how you stitch them together, you’re repeating rooms you’ve seen a lot of times. Dungeon 7, for example, is still horrible and frustrating to play through, so I’d never want to repeat it in an optional thing such as the Chamber Dungeons. However, there are heart containers given for completing Dampé’s challenges, so if you really want to see everything, you’ll pretty much have to get involved. If Nintendo went full Mario Maker on this, allowing online sharing, it’d be a far better feature.

Regardless, an optional extra isn’t going to sour the wonder of Link’s Awakening. A Link to the Past was followed many years later with A Link Between Worlds, but both remain fantastic. Breath of the Wild is the pinnacle of the series and genre, but Link’s Awakening stands tall as a brilliant, special game that is worth playing as much today as it was when it was first released. It’s a testament to the level of quality Link’s Awakening hits that even with the technical issues, I still can’t recommend it enough. Whether you’re a new player, or like me, you’ve played it umpteen times on Game Boy, then again with the DX edition, Link’s Awakening remains utterly compelling and is another Switch must-have.

Gorgeous aesthetic
Entirely faithful remake
Loads of adventuring to do

Whether you’re a new or old player, Link’s Awakening remains is hugely compelling and is another Switch must-have.

Link’s Awakening to get a Nintendo Switch remake

The Legend of Zelda: Link’s Awakening – The Retrocast