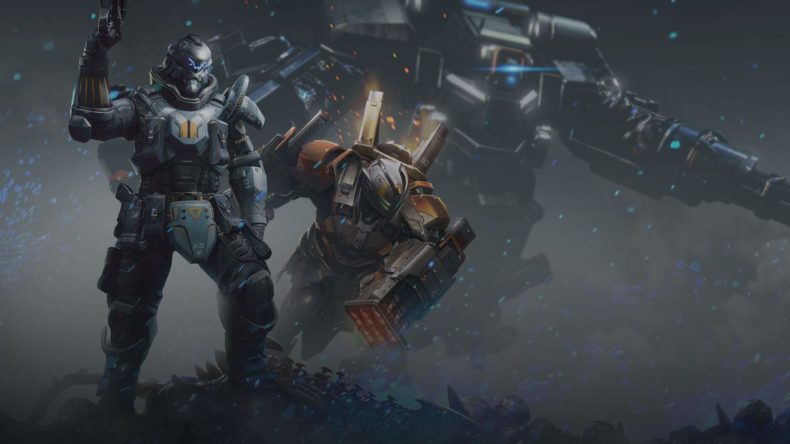 I jumped into Anvil: Vault Breakers with zero expectations. Having recently been left a little cold by similar-looking titles like Space Punks and The Ascent, I was ready for another fairly enjoyable but ultimately shallow twin-stick shooter. What I got was a chimera spliced together from bits of Warframe, Hades, Diablo, Destiny and it’s absolutely superb.

For a start, it’s going to offer some serious content. I’ve been playing a demo and went through 15 of the procedurally-generated stages and saw very few things repeated. Fair enough, the enemies, landscapes, weapons, and objectives looped, but in random orders and configurations. You take the role of a Vault Breaker, that is someone at the helm of a remote-controlled battlesuit who’s job is to seek out Vaults and break them open for the alien goodies inside. So add Borderlands to the list of influences too, I guess. 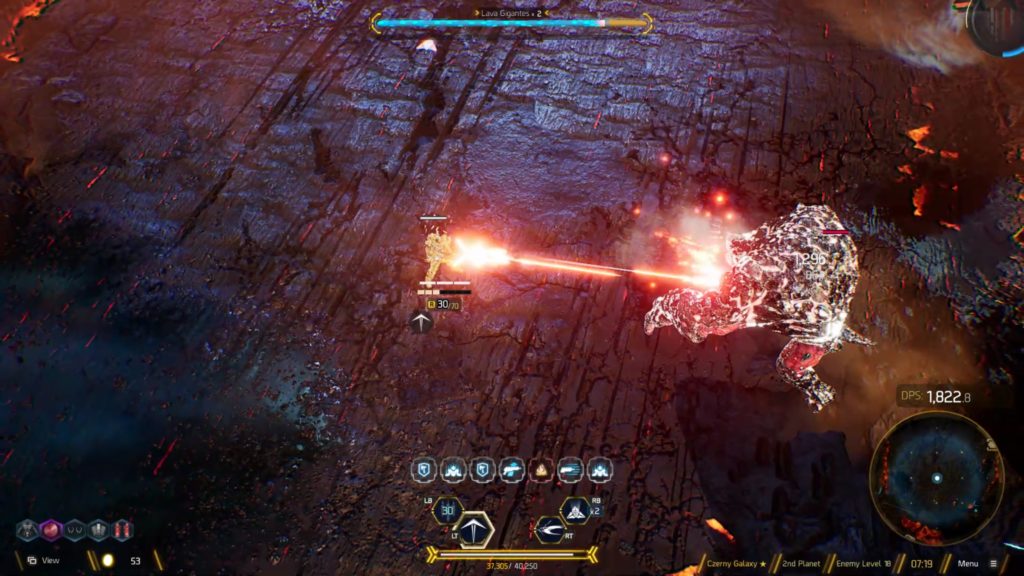 The battlesuits, called Breakers, are derivative of Warframes. Not only in how they look, either, but in the way their skills are laid out and presented. Default suit, Jungler, is a pretty straightforward military class. He has a wide-arc blade attack, a dash, a rocket barrage and a couple of mines he can throw out. He also uses rifles, snipers, and shotguns. The second class, Guillotine, has a huge axe which can also be swapped out for hammers, gauntlets and massive heavy weapons. You’ll need to work your way through the battle pass (which at the moment is barely filled out, this being a demo) to unlock the other suits.

There’s a huge variety of weapons in Anvil: Vault Breakers, all colour-coded in the standard loot hues. What’s interesting is the way progression works. Not only do you unlock skills as you level up, you can also unlock permanent upgrades to your suits back at the hub. There’s even a little AI companion called a Worker Toy to unlock later on. But besides this, levels are dotted with special crates that hold Hades-style upgrades. These come in threes and will offer boosts to your suits skills that last for the run. These might decrease cooldown or increase range, or perhaps offer permanent health regeneration. 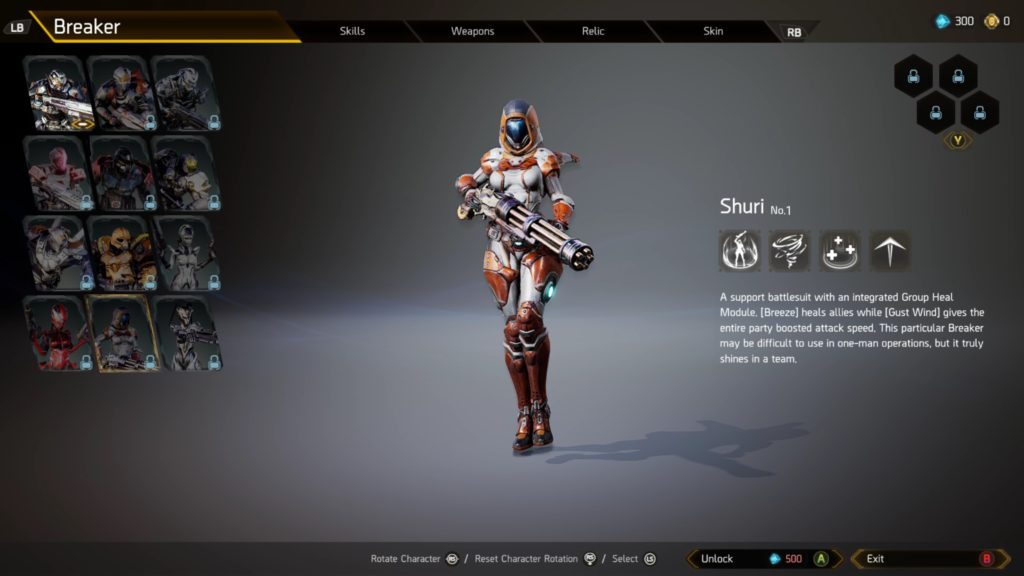 The first world you can drop into has five separate missions. This involves three objective-based incursions and two boss fights. Death will send you back to the hub and you’ll have to start again, though you can spend XP and premium currency here to unlock new battlesuits and gear. So far I’ve found the bosses to be a ton of fun. Usually by the time you reach them you’ll have unlocked a handful of cool skills that make fighting them a little easier. For example, Jungler can execute perfect dodges to which you can attach certain skills like imp[roved damage or health regeneration. Guillotine is too big to dodge, and instead has a shield that can perform parries and counter-attacks.

For a first impression, this demo is just incredible stuff. If I sound like I’m gushing, that’s because I am. There’s so much in this demo that it only gets me giddy at the thought of the full game. Developers Action Square have done an amazing job so far, throwing in so many little elements, so much to chase and unlock, so much variety. Even in-mission, there’s a huge amount to do in Anvil: Vault Breakers. You’re constantly rewarded by shiny gear drops, spinning upgrade crates, new weapons, combat aids such as drone suits and turrets, or just money to buy new stuff. 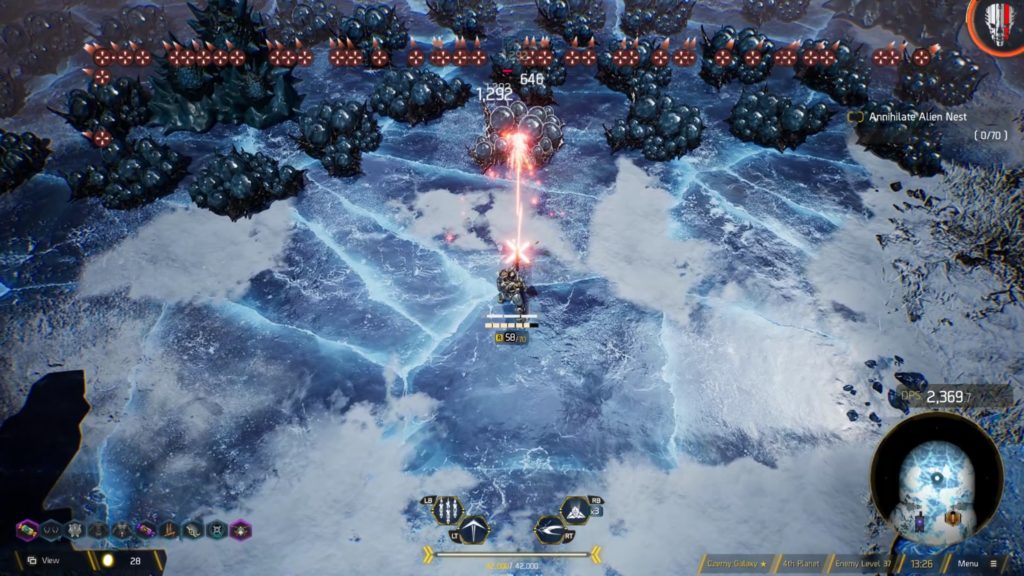 If there’s one complaint so far it’s that the UI is incredibly small. I kept dying because the health readout above your character is so tiny and dull yellow that it’s hard to make out. Likewise, the little row of upgrades you have in the bottom left is barely decipherable until you’ve learned what all the symbols mean and there are a lot. It wouldn’t hurt to put your health on a bigger bar somewhere and make everything a little clearer. Aside the map, the biggest icon is your XP, which could stand to be tiny. Or maybe the big icon in the top right that shows the cooldown until a set of stronger enemies spawn and the smaller enemies get a buff for thirty seconds.

Aside this, the presentation is stellar. There’s a lot of detail in the environments, the enemies are diverse and cool, and each battlesuit looks and feels very different. In the spread of levels I played I saw many environments from forest and wastelands, to frozen research bases. There’s currently a dozen battlesuits and three worlds, though more are likely to follow. It’s not often I play a demo and feel so ridiculously excited at the potential of the full game. From what I’ve seen so far, Action Square could well be a developer to keep an eye on.

Anvil Vault has a demo on steam right now!

Senior Content Editor Mick has been playing games for over 30 years and writing about them for around 12. After drifting from site to site for a while, settling briefly at the now-defunct Made2Game and freelancing for the gone-but-not-forgotten NintendoGamer Magazine, he came at last to rest at Godisageek. Mick has been a reviewer, staff writer and content editor here for some time, while also moonlighting a little for Red Bull Games. He has 4 kids, has written 2 novels, and sometimes even manages to pay a bill or two. You'll usually find him defending the galaxy in Destiny 2, battling evil in Diablo 3, or lurking in the background on Twitter. Find him there @Jedi_Beats_Tank, or on XBL (JediWaster247), PSN (Jedi_Waster) or Nintendo (JediWaster).
MORE LIKE THIS
Action SquareAnvil: Vault Breakers