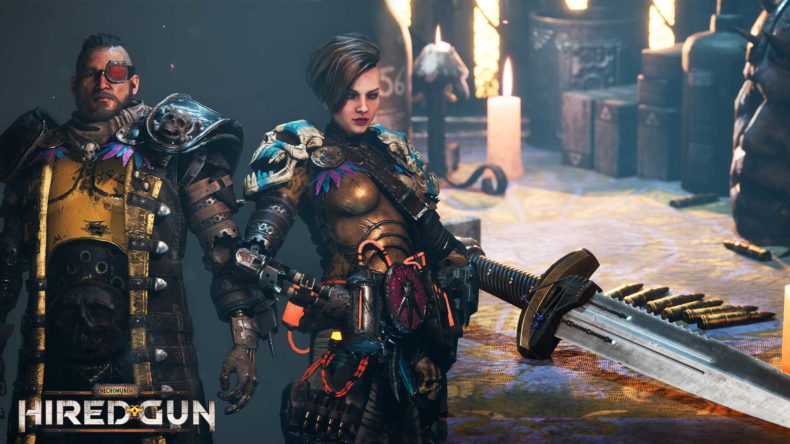 As one of the deadliest hive cities of the Warhammer 40,000 universe, Necromunda: Hired Gun is a brutal first-person shooter, and now it’s getting an update that adds some free cosmetics and skins to give you more customisation options.

First up is the Gang Wars cosmetics bundle which contains three new cosmetic sets with different looks for your outfit, knife, loyal cyber-mastiff, and chew toy. Each set is themed around the Escher, Goliath or Nautica gangs.

The Hellhound pack is also available for free, with another set of skins. The cosmetic pack comes with unique cosmetics for your knife, outfit, and mastiff. Yes, that’s right, mastiff as in the dog.

Necromunda: Hired Gun and it’s update (of course) are currently on sale via Steam at 38% off. Mick quite liked the game in his review, giving it a 6.5/10, saying: “Despite my many complaints, though, Necromunda: Hired Gun is a competent, fun shooter when it all works. It’s fast-paced, loud, and unashamedly grim. The campaign won’t take up more than a dozen hours, and the side-missions (stripped down versions of the former with simpler objectives) will take up a few hours more, but this is no huge and sprawling shooter RPG. If the devs had taken away just a handful of these elements and focused on reducing the jank in the movement and gunplay, this could have been a much more consistently entertaining shooter. As it stands, it’s decent, and fans of W40K will certainly find enough hidden lore and visual nods to get a kick out of it, but anyone just looking for a new FPS to get stuck into might find it wanting.”

You can even have a look at the game in action via his video review, below: