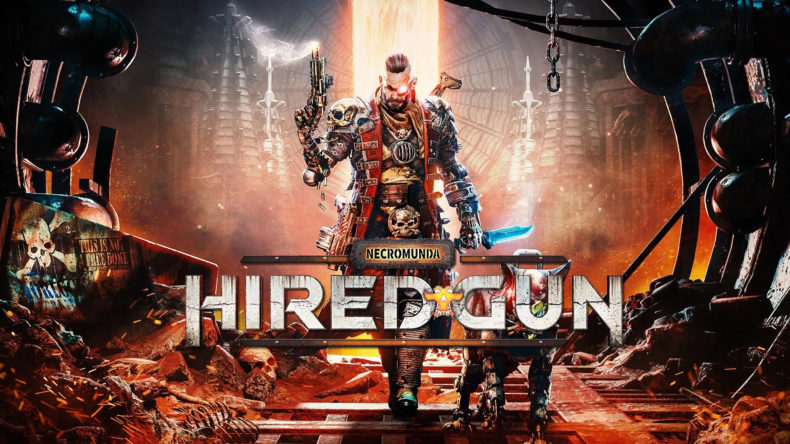 I imagine a wall, somewhere in England, with the words “Games Workshop Vidya Gamez” splashed up it in Gun-metal Grey. Here, a team of talented developers have been hurling ideas for over a decade and going with whichever ones don’t immediately slide off. The result has been a mixed bag of genres and titles. But in total fairness, most have been above average in terms of quality. We’ve had third person shooters, turn-based tactics, isometric looter RPGs, Left4Dead-style team shooters and whatever the hell Necromunda: Underhive is. And now we have Necromunda: Hired Gun, a hodge-podge of ideas that feels like Doom Eternal ate Ghostrunner with a side of Space Marine, went to bed and found this in the sheets in the morning.

Before I start in on Necomunda: Hired Gun, a brief history lesson. Around a hundred years ago, the world was simpler and safer and everyone sort of got along because Twitter didn’t exist. Back then, there was a game released on Xbox 360 and PS3 called Dead to Rights: Retribution. It was a game about a cop with the coppiest name ever, Jack Slate, and his K-9 companion. The pair went around solving crimes using the Max Payne rulebook. That is to shoot and/or maul everybody in slow motion bullet time while snarling one-liners and filling in the quiet with grizzled metaphors about cities bleeding, etc. 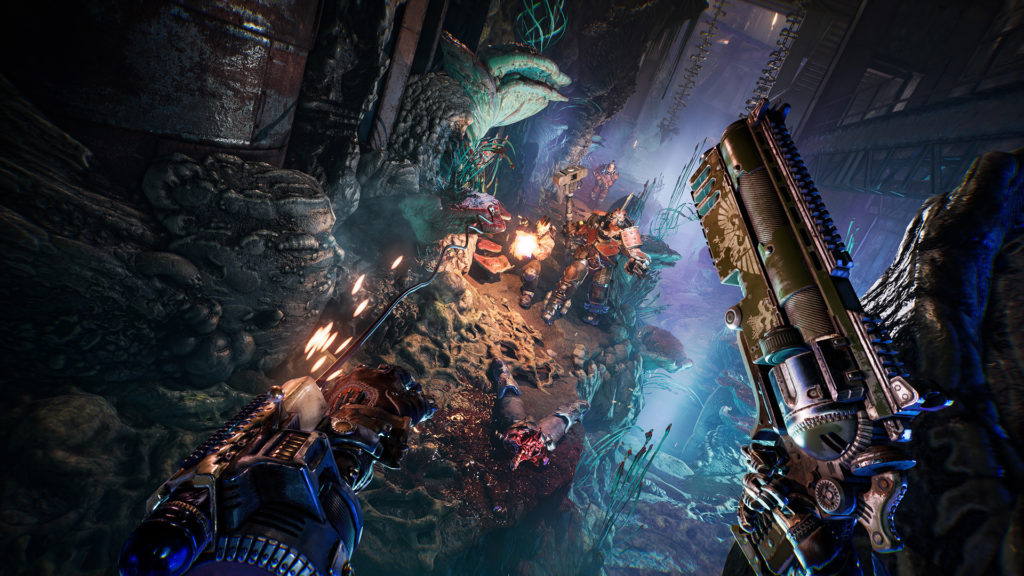 It was a decent shooter for its time, using the dog to great effect to grab goons by the nuts and generally be the bestest boi on the block. This was kind of what I was expecting from Necromunda: Hired Gun. It sold itself on the premise of a hardcore gun-for-hire plus tricked-out canine companion. I assumed we would be getting a balls-out shooter like Doom Eternal. Only with the added coolness of a doggie companion ready to rip and tear the nards off space-punks on command. Sadly, Hired Gun is not that.

Which is not to say it’s bad. In fact, it’s pretty damn good in some areas. But it’s one of the most inconsistent experiences I’ve had with a game in years. You play a mercenary in one of Warhammer 40K’s sprawling Hiveworlds. These are planet-sized foundries in which millions of humans clamour together to produce the oil and blood-stained technology that powers the Imperium of Man. Fans of W40K need no explanations, while anyone not versed need only be educated by their eyes. The Warhammer 40K universe is like Mad Max times a thousand but with Space Orks, Chaos gods, and more metal than can safely be contained within a single property. It’s awesome, frankly, and has grown into one of the most recognisable sci-fi properties of the last 30-odd years.

It translates wonderfully into video game form, too, particularly aesthetically. Hired Gun is kind of beautiful in a very twisted way. There’s incredible detail in the environments that shows just how dedicated the devs are to bringing Necromunda to life. The between-mission hub is a grimy bar called Martyr’s End that resembles the scariest S&M club this side of Croydon. Here, everyone is happy to stand around covered in engine grease and dried viscera, chatting in a way that seems at odds with a world that chews up and spits out humans like used engine parts. Crime is so prolific that bounty hunting is the number one profession. Your protagonist is a dangerously grizzled hard-nut with a devil-may-care attitude and all the emotional depth of a discarded Bovril cup. 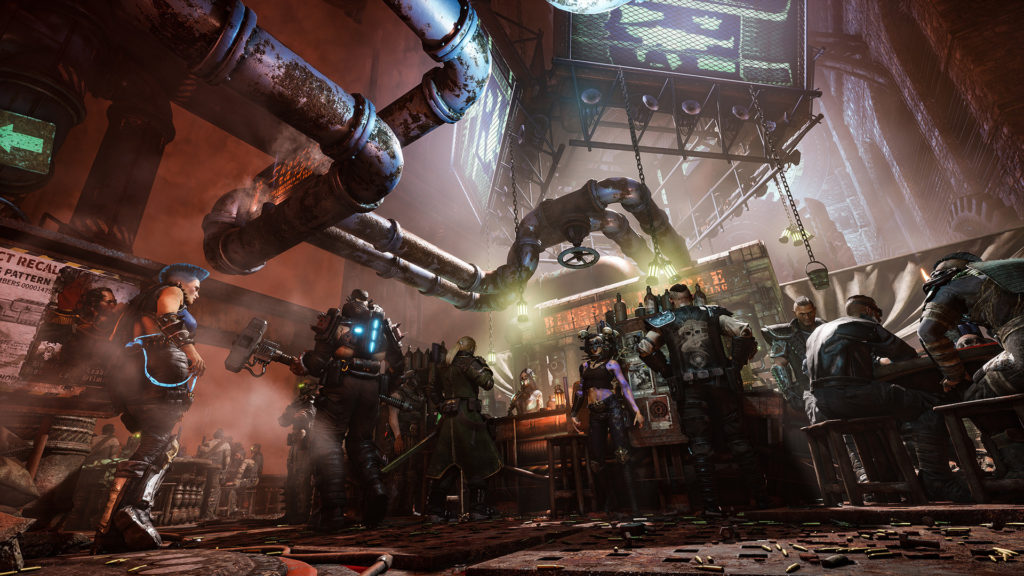 Painful Lancashire accent aside, your character is more or less a cipher upon which you can impress whatever kind of backstory you want. You’re a mercenary, and you kill things for money. Beyond that, you pretty much just stand around while other people talk and try to pay attention to the details. Necromunda: Hired Gun has elements of a looter-shooter. You’ll find colour-coded gear in chests throughout each mission which you can choose to keep and equip or sell for credits. Only the guns change in appearance, as your mostly hidden hireling only looks different on the menu screen if you switch skins.

You’ll equip weapons, charms, gear accessories and armour to mitigate damage. You can also visit a Rogue Doc to enhance yourself with cybernetic augments. These add extra dimensions to the gameplay such as the ability to slow time or heal from kills. Oh, and a grappling chain can be used to rip away enemy shields during gunfights. The shooting itself is quite literally hit and miss. Enemies rarely throw themselves at you a-la Doom, instead hanging back and shooting. Although non-human enemies like Genestealers will Zerg you for funsies. 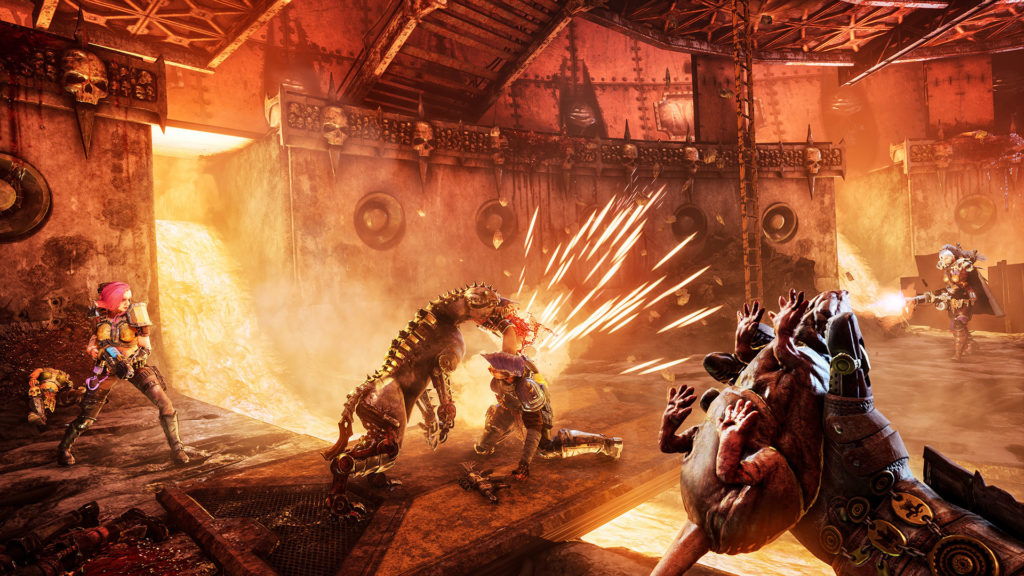 There’s an aim assist option which is bugged in my version of the game (PS5), but is sorely needed. Without it the guns feel imprecise and sluggish. Therefore I had to mess with sensitivity and dead zone settings to feel comfortable. Also, you know how a thousand games use the same button layout which isn’t broke and certainly doesn’t need fixing? Hired Gun chooses to chuck commands all over the face buttons and triggers to frustrating effect.

Surely, the dog will elevate this though, right? Sadly, no, not really. Despite being a big deal in the marketing, the Cyber-mastiff is underused and mostly ineffective. First, you summon it with a squeaky chew toy. It then highlights enemies through walls, savages whichever limbs and sexual organs have recently offended it, and buggers off until a cooldown lets you summon it again. Rather than feel integral, the hound feels like a class power you can use for a bit. The writing could have made it more a part of the story, built a relationship between the mercenary and the beast. But sadly it doesn’t really bother. As a result, it’s very underwhelming as both a mechanic and a narrative element.

In some respects, the dog wouldn’t work any other way. Traversal is a mix of sliding, wall-running and grappling, that seems to ape last year’s Ghostrunner. That is, only with none of the style or fluidity. Executing enemies with melee attacks disrupts the flow of combat like a shiv in the throat. Bullet-sponge brutes, robots or minibosses necessitate backpedling and circle-strafing as opposed to any of the slick acrobatics you might expect with double-jumps and grapples at your disposal. I have to confess to occasionally suffering mild bouts of inertia after particularly energetic shootouts left me feeling giddy. Probably partly due to all the leaping about, and partly due to a framerate that sometimes just gives up trying.

The environments are drawn with visible care, though. Atmosphere drips in ruddy globs from every grimy surface, drifts in ragged wisps from every cyborg head used as an ashtray, crackles in the fires of industry that burn and churn and endlessly turn. The world feels oppressive, dangerous, and there’s a weird kind of beauty in the flame and muck. Of course, the atmosphere threatens to come unstuck when enemies fail to react to point-blank plasma bolts in the face, but you can’t have everything.

Despite my many complaints, though, Necromunda: Hired Gun is a competent, fun shooter when it all works. It’s fast-paced, loud, and unashamedly grim. The campaign won’t take up more than a dozen hours, and the side-missions (stripped down versions of the former with simpler objectives) will take up a few hours more, but this is no huge and sprawling shooter RPG. If the devs had taken away just a handful of these elements and focused on reducing the jank in the movement and gunplay, this could have been a much more consistently entertaining shooter. As it stands, it’s decent, and fans of W40K will certainly find enough hidden lore and visual nods to get a kick out of it, but anyone just looking for a new FPS to get stuck into might find it wanting.

Fast-paced, loud, and unashamedly grim, Necromunda: Hired Gun is a competent, fun shooter when it all works.