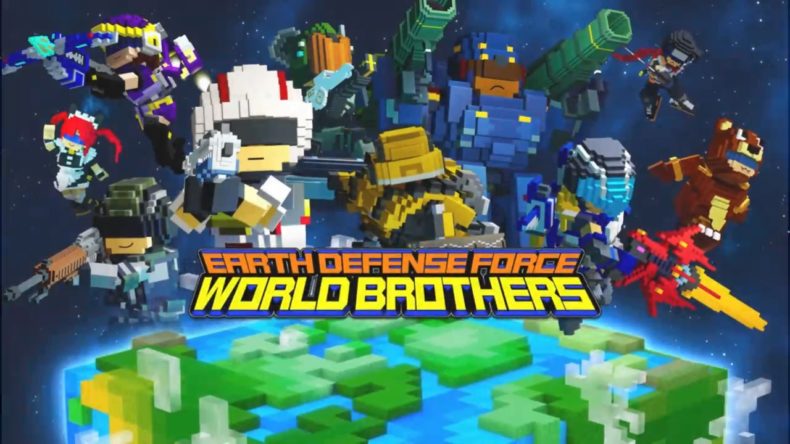 Earth Defence Force is a series I’ve always struggled to take seriously. Although that’s probably been the point from the beginning. A franchise about an elite special military unit designed to fight legions of giant insects and robots? It’s hardly Oscar-winning stuff, and yet the developers have always known this. And they now seem to be leaning into it with relish for Earth Defence Force: World Brothers.

Originally, EDF was created as part of the Simple Series in the PlayStation 2 era. A stable of games built on lower budgets, most of the Simple Series never saw a release in the West. EDF is one of the few that did, alongside Onechanbara. You know, that franchise best known for being about bikini-clad anime girls killing zombies with katanas. Earth Defence Force went the other way, attempting to inject some realism into its inherently silly premise. This has seen mixed results, to be fair. 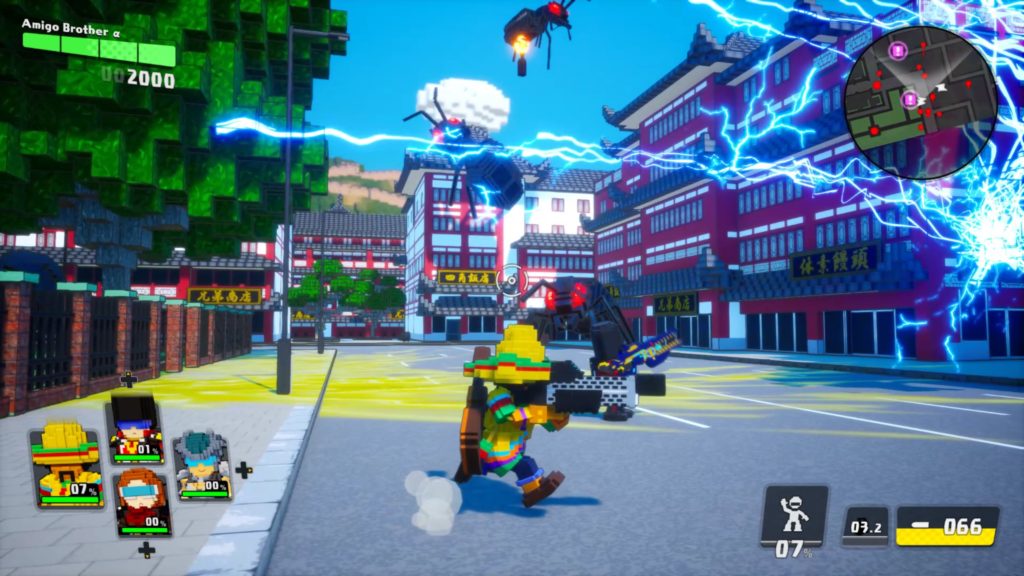 When I first saw the trailer for spin-off, Earth Defence Force: World Brothers, a snarky little part of me assumed that developer Yuke’s had thrown in the towel. The previous aesthetic was gone, replaced by voxel-art characters. The atmosphere is also different, now resembling the kind of mindless action cartoons that 12-year-old me lived for. Within just a few minutes of play, however, I realised that Yuke’s know exactly what they’re doing. Kind of.

How do you take a game about cheesy super soldiers fighting realistic creepy-crawlies in drab, destructible urban settings and make the masses pay attention? How do you increase the audience beyond the diehard fans who are happy to just have more of the same without completely alienating them?

Well, you do this. 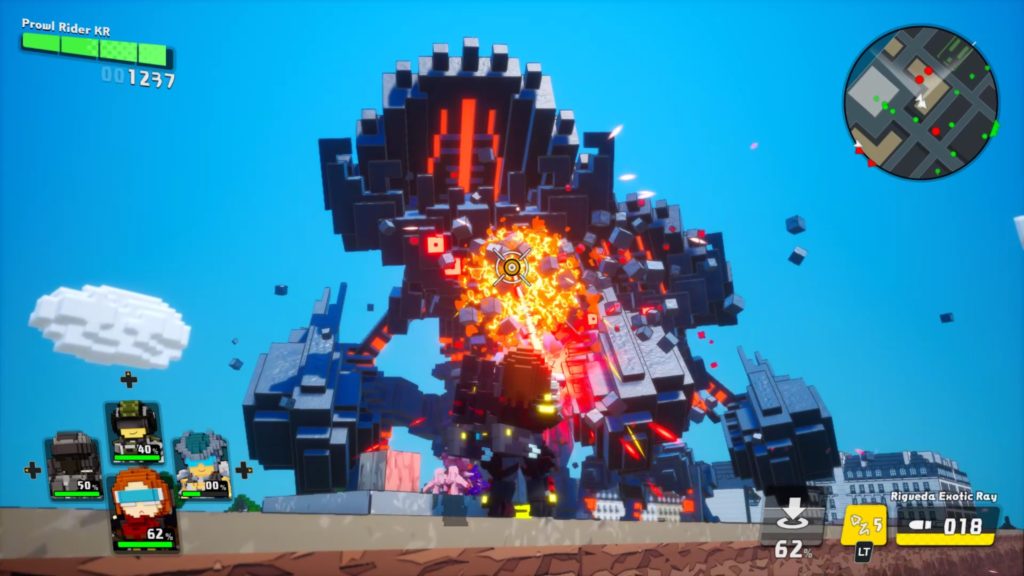 Kill it with fire

World Brothers swaps the grimier look for bright colours, and leans into the silliness. It may actually be a little too heavily done in places, too. In this version of events, the Earth is a cube and has been shattered by the Aggressor Fleet. Now humanity is scattered across all the broken chunks of former nations. So it’s up to the brothers and sisters of the EDF to somehow fix it.

To do this you’ll take a team of four heroes to a variety of locales and shoot things. The other three characters are either AI or player-controlled. There’s several dozen characters to rescue and recruit, some of which are unique in terms of weapons and abilities. You can change loadouts and add accessories to boost their stats, but there’s not really anything here I’d call synergy. It’s just shooting and dodging and making things go boom. 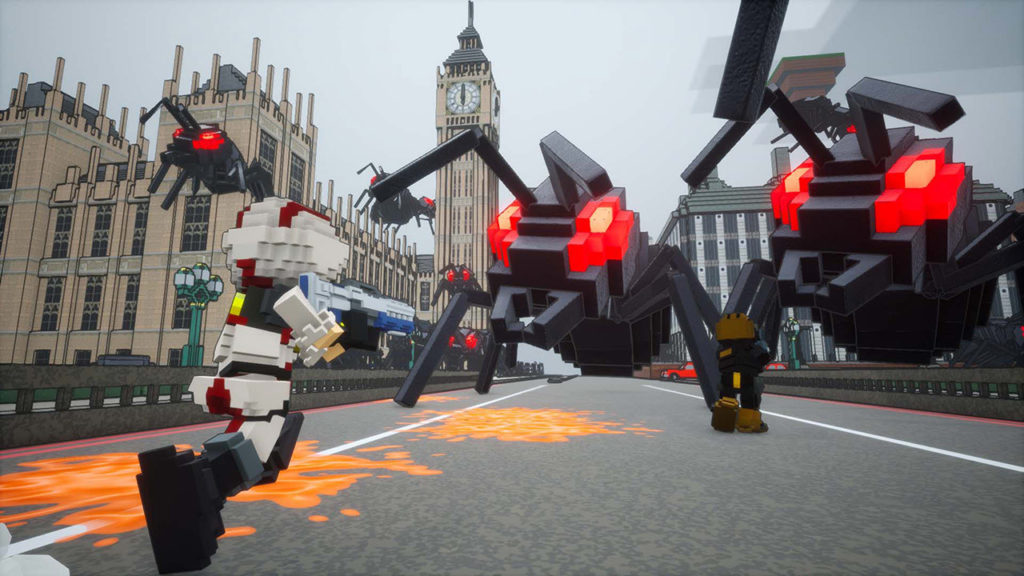 Some characters are a lot more fun than others, though. There’s a melee-centric Brother that I just couldn’t see the point of, while the Wing Diver who can fly and take out smaller enemies with a single precision shot is the most fun by miles. Massive robots, a Godzilla rip-off, and hoards of insects are just some of the things you’ll face, but most can be dealt with in the same way. You shoot until your special attack is charged, then use that, then repeat the process. In the meantime you scoop up power ups and health packs and seek out fellow Brothers and Sisters that need rescuing. There are a few side objectives such as destroying nests, and sometimes operatives will tag alongside your team for story purposes. Honestly though, there’s not a great deal of variety.

One area that suffers heavily from samey-ness is the “comedy”. It’s incredibly self-aware, with characters openly discussing the soundtrack, acknowledging that it’s a video game, even discussing the phases of a boss fight as they’re happening. This raised a smile at first, but soon became a little rote. Likewise, the one-liners uttered by the characters tickled me until I realised everyone only has about half a dozen lines and they repeat over and over again. I can also see some people finding ways to be offended by the racial stereotypes of some of the characters, which honestly feels a little like something from a 90s cartoon.

Adjust your expectations accordingly, and there’s a lot to like here. Low detail, destructible environments and good old fashioned blasting make for some great family fun, while the overall feel of Earth Defence Force: World Brothers should tide over the franchise fans until the arrival of EDF 6 later in the year.

Blasting is fun
Family friendly
Can be funny

The family-friendly blasting of Earth Defence Force: World Brothers should tide over the franchise fans until the arrival of EDF 6 later in the year.