previous
World of Warcraft: Wrath of the Lich King Classic is coming this September
random
next
Lord Winklebottom Investigates Walkthrough | Get the Wood and the Tar
0 comments

Destroy All Humans 2 gets a locations trailer 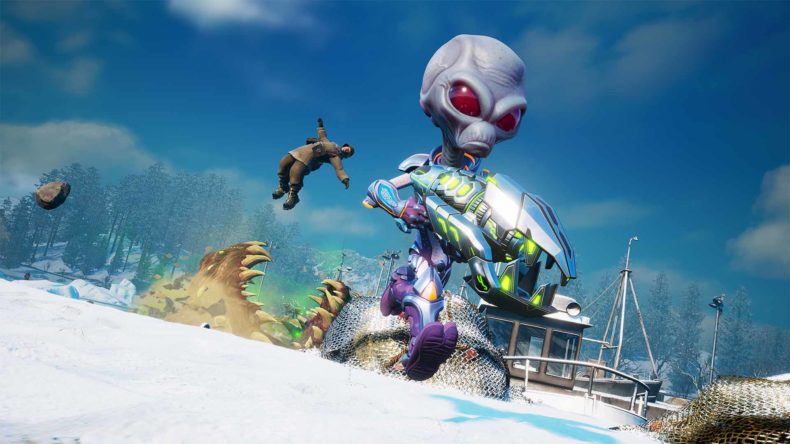 This follows on from the co-op trailer last month, and is all in aid of ramping up to the release on August 30th, which is pretty soon… isn’t that scary?

The official word on the trailer is as follows:

Citizens of planet Earth, you can run but you can’t hide from us! The new trailer for Destroy All Humans! 2 – Reprobed shows a variety of locations for players to explore, demolish, wreck, tear down, destroy…. Leave a path of chaos wherever you go! Maybe a skyscraper in Bay City, that beautiful bridge in Albion, or the KGB headquarters – what will be your next target?

Visit Bay City, Albion, Tunguska, Takoshima and Solaris to seek your revenge and claim those pesky Human settlements in the name of the Furon Empire.

Like the previous game, there’s a crazy special edition. This limited Collector’s Edition includes all digital content as in the Dressed to Skill Edition and comes with a gigantic, 27,6 inch / 70 cm high Crypto-figurine, an “Arkwobbler” which is of course a wobble-statue of the great Arkvoodle, a vintage metal plate, an artbook, the orchestral score on CD and the game for your favorite platform. This edition is meant to Destroy All Wallets! and is on sale at an SRP of $ 399.99 / € 399.99 / £ 349.99.

Editor-in-Chief.
MORE LIKE THIS
Destroy All Humans! 2thq nordic

Destroy All Humans! 2 – Reprobed is coming this August