previous
Monument Valley is coming to PC this July
random
next
V Rising has sold over 1.5 million copies since launch
0 comments

Destroy All Humans! 2 – Reprobed is coming this August 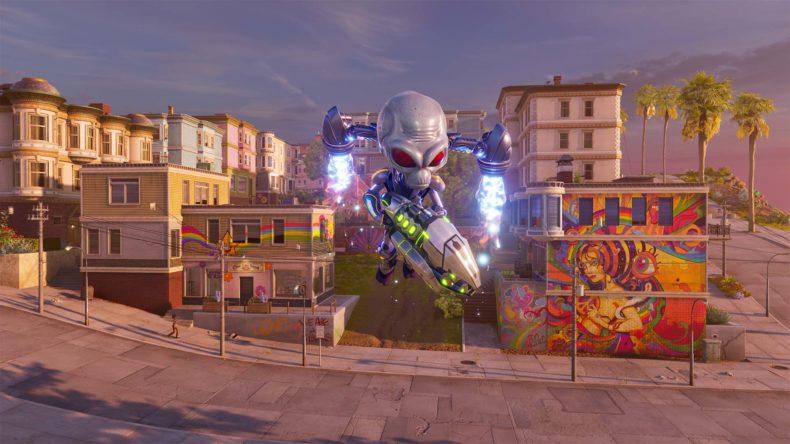 THQ Nordic has announced that Destroy All Humans! 2 – Reprobed (the remake of the sequel) is coming to PS5, Xbox Series S|X, and PC on August 30th, this year.

With names like Crypto involved in the game, you’d be forgiven for running a mile, but that’s just the name of the evil alien invader (138) in Destroy All Humans! 2 – Reprobed. The game includes five large open world areas: Bay City, Albion, Takoshima, Tunguska, and the Moon, and it’ll take place in the 60s, including hippies, the KGB, and more.

To roam quickly around the large areas, Crypto can use his jetpack; his hoverboard; and of course his flying saucer, equipped with a neat little arsenal of destruction of its own. The saucer received an interesting update: abducting humans in certain numbers (you’ll have to follow the recipe!) will unlock new skills. And last but not least, Destroy All Humans 2! – Reprobed features a 2-player, split-screen coop-mode so you and a friend (or whatever floats your boat) can destroy all humans together!

There will be a collectors edition, too, called the “Dressed to Skill” edition, which includes Challenge Accepted DLC pack, a skin pack, and the Clone Carnage DLC, while the physical collectors edition is the ultra-high end one that’ll cost you $399.99, if you fancy it.

Interactive Trailer Lets You Decide How to Destroy All Humans!

Get Ready to Destroy All Humans! This July