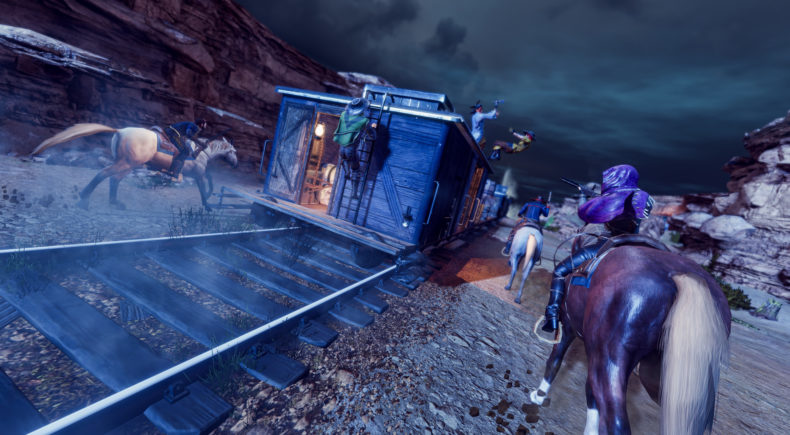 Following on from my recent hands-on preview of Hard West 2, I got to join a live playthrough with a couple of key members of the Ice Code Games dev team. Via the wonders of Discord I jumped in with Mateusz Pilski, Chief Technology Officer, and Grzegorz Ziemba, Lead Producer, to watch the masters at work (sort of), and even got to ask a few questions.

Hard West 2 is an occult-themed tactical Western following the exploits of Gin Carter and his ragtag gang of cursed outlaws. A squad-based grid shooter in the vein of XCOM, it adds a huge amount of variety to the genre by introducing unique powers and abilities that can heavily influence the flow of any encounter.

For example, a character named Flynn is able to magically swap places with any other character, friend or foe. As you can imagine, this allows for some pretty cool tactical moves. If Flynn is beside the melee-focused Laughing Deer, for instance, she can teleport an enemy into her place for an easy attack. There’s also man of God, Lazarus, who can swap his health points with another character, healing himself and leaving them critically wounded. 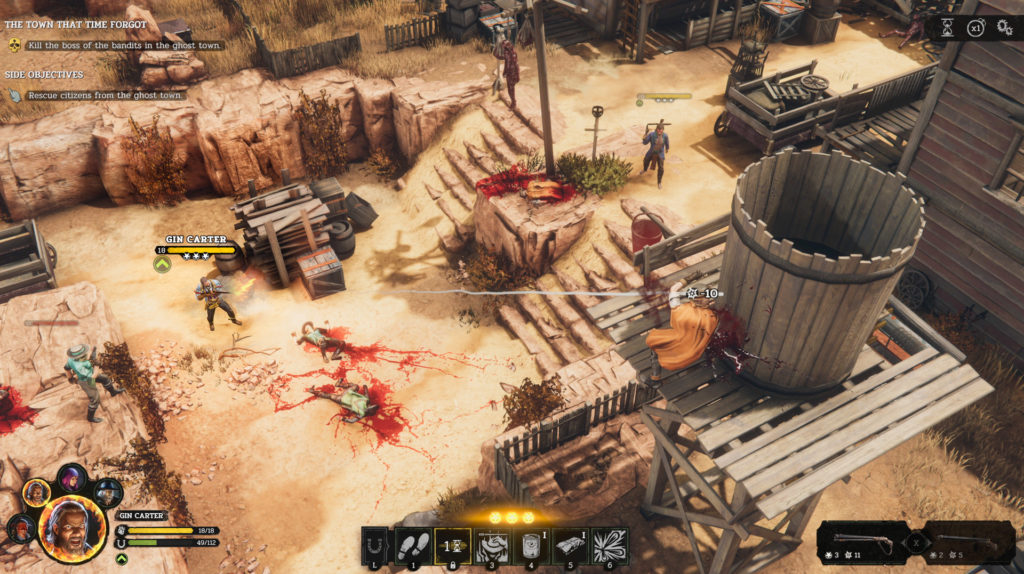 As you’re almost always massively outnumbered in Hard West 2, each and every character brings a unique tactical element to the table. I asked Mateusz (who was streaming the game as I watched) if we’ll be able to choose our party before each mission.

“You can, yes,” he explained hesitantly, “but some of the missions have locked characters because of the story, though it’s mostly just one character or something like that. We wanted to give players the freedom of choosing their loadouts and play-style.”

This is a vital choice, too, as Grzegorz explained: “It’s going to be pretty important, if you want to get good in Hard West 2, to utilise the synergies between the characters. You can find synergies between basically every character.”

As Mateusz made his way through the Grand Bank Robbery mission, I was impressed by the level of detail on display. Hard West 2 is one good-looking game. His party consisted of body-swapping outlaw Flynn, the Tomahawk-wielding Laughing Deer, elephant-gunner Cla’lish, and holy man Lazarus, and each has a strong sense of individuality, both in visual design and personality. 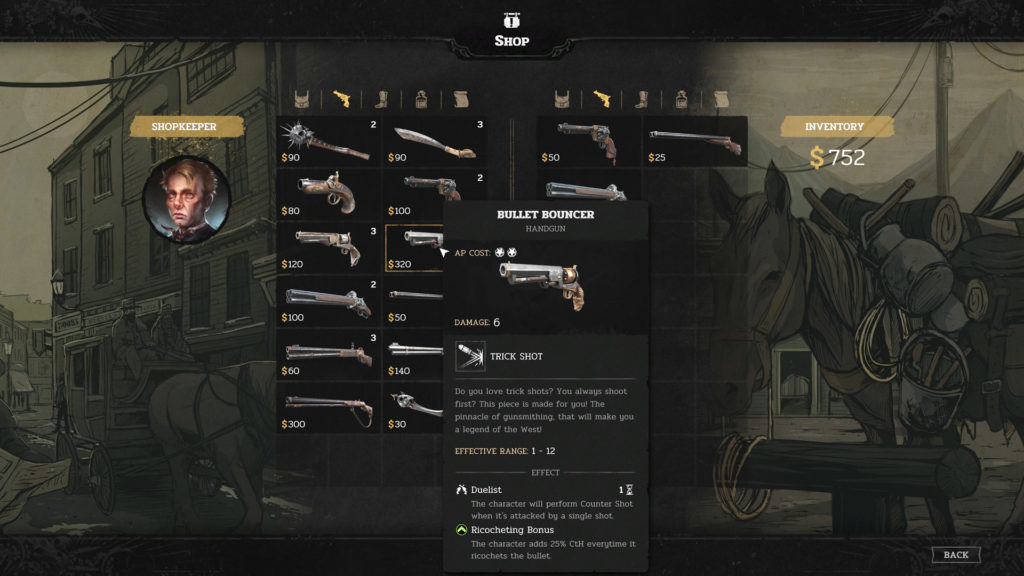 As in XCOM you’ll need to use cover, as well as elevation, to maintain line-of-sight and protect yourself. Hard West 2 is designed to be tough, and there’s very little room for error. The Bravado system rewards boldness, awarding you extra action points for killing enemies. It essentially allows you to chain kills and moves to tip the scales of a battle in your favour. I watched as Mateusz used Lazarus to take out one enemy with dynamite and two more by pistol, with movement in between, simply by utilising the Bravado system. Without it you’d be overwhelmed in moments.

“Unlike in other XCOM-likes, it’s not about hiding behind cover with Overwatch, waiting for enemies to come to you,” Grzegorz told me. “In Hard West 2 you really have to go for them. There’s always more enemies and you need to figure a way to kill many of them in each round.”

Combat encounters in Hard West 2 are almost like puzzles, and using the right characters for the right situation is essential. Using the environment is also an option: you can ricochet bullets from tin signs, or use explosives to deal damage to large groups. The onus really is on getting in and hitting the enemy hard as much as you can each round. Even during my limited time with the Closed Beta a few months ago, I felt the difference between Hard West 2 and other XCOM-like games I’ve played. 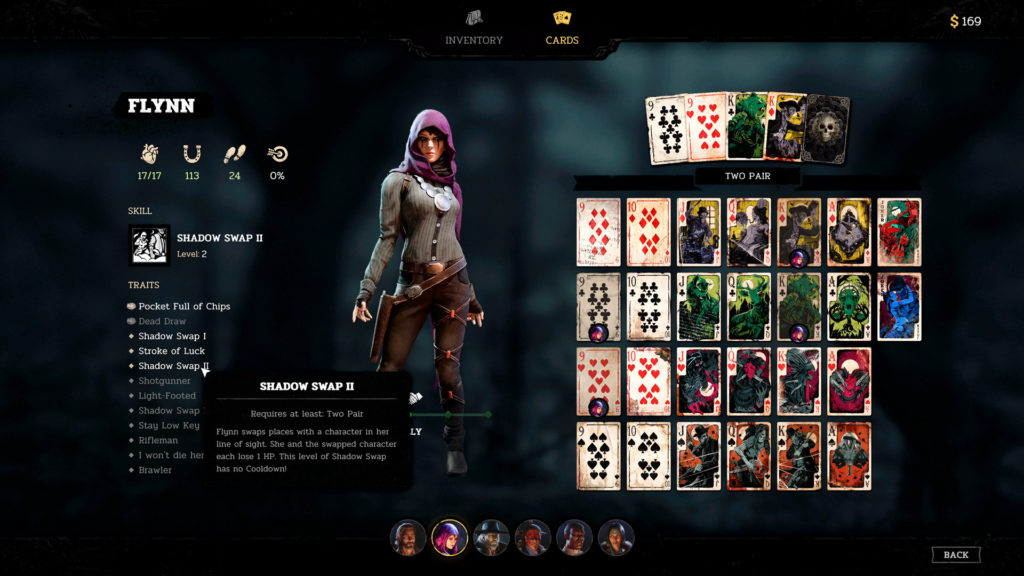 Given the large roster of characters, I expected permadeath to be a feature, but thankfully (or not, depending on your opinion), it’s not. Mateausz explained why: “We didn’t do permadeath because the story is very important, and all of the posse members are talking throughout the story. We also didn’t want the player to feel they had to be too careful in the missions, because we want players to take risks and experiment.”

If a character falls in a battle, they’ll revive on the strategic map with 1HP, and you can then spend money to heal them. Obviously you’ll want to avoid this, though both Mateusz and Grzegorz are quick to point out that although save-scumming is possible, it’s not the intended solution to a bad situation.

While you can’t really change your characters or alter their intrinsic skills like an RPG, there is an element of customisation involved. “You can change their loadout,” said Grzegorz, “and give them cards.” The cards he is referring to are assembled like a poker deal which you assign to a character to boost individual stats and skill effects, something I dabbled with in the beta. Creating an actual poker hand allows for even greater bonuses and benefits. There’s also a Loyalty system which allows you to interact with your characters on the strategic map, and make choices that affect their opinion of Carter and can unlock story branches and abilities. 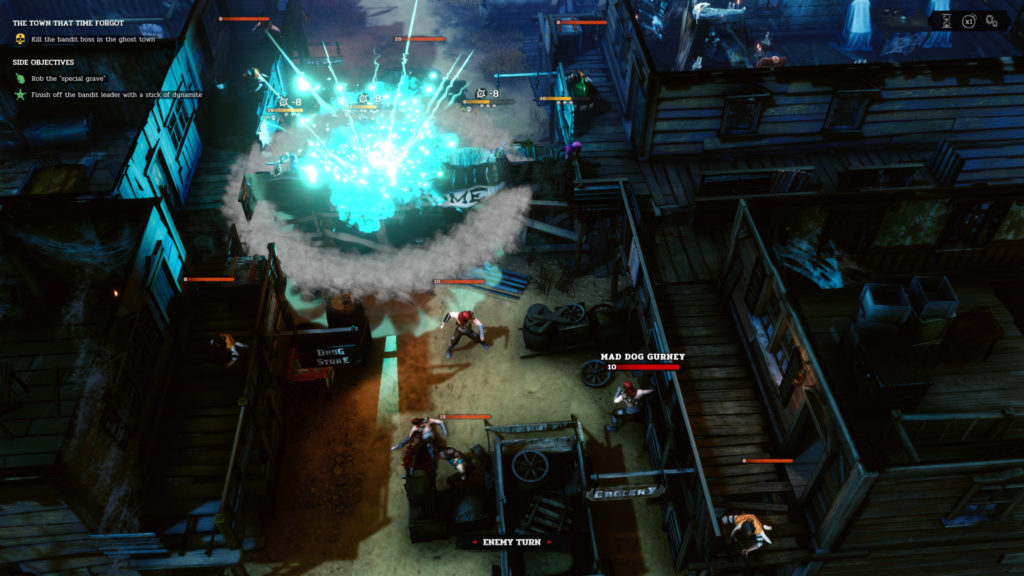 It’s obvious how much passion has been poured into Hard West 2. The Western theme is prevalent throughout, from sound-bites and quotes to the musical score. While Hard West was a more cartoony affair, the sequel is grittier and better-looking. One element that feeds directly into the Western feel is the “spectacular death” as the devs call it internally. These are context-sensitive kills, such as tossing an enemy over a balcony or smashing them against a nearby wall. “If you have the opportunity to die spectacularly, then you’re doing so,” Mateusz elaborated, smiling.

“We wanted to have more movement despite the game being turn-based,” Grzegorz confirmed. “We wanted it to be more dynamic and more… Western.”

Even after fighting his way up to the bank at the top of the map, Mateusz faced stiff opposition inside the building. Hard West is set to be an incredibly challenging experience that will call on all your knowledge of the genre as a whole, as well as force you to think on your feet and tackle each encounter like a violent puzzle – which is made even more challenging by the fact that you can’t easily restore HP mid-mission. 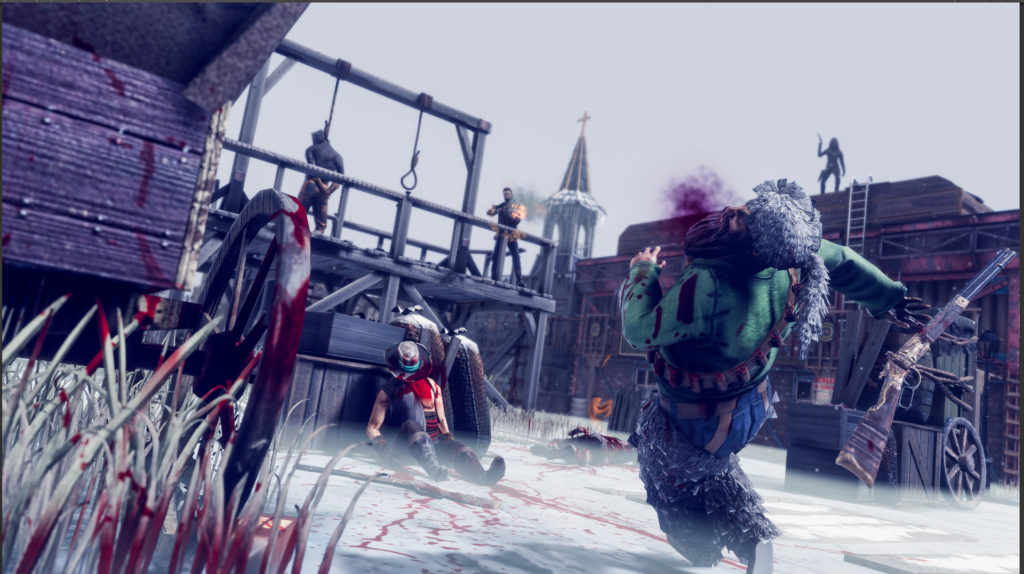 “There’s no classic healing skill,” Grzegorz said, to my mild horror. “You have items like a doctor’s bag and things that remove negative statuses, but we didn’t feel that healing skills matched the dark tone of the game and the vibe we wanted to achieve. It’s more witchcraft-y, you know? You have to sacrifice something to gain something.”

Even Mateusz struggled to complete this particular encounter, despite using everything at his disposal and being one of the guys who made the game. I’m expecting a steep challenge and heaps of atmosphere, with a side order of the macabre thrown in. All of which has me excited to get hold of Hard West 2 when it launches on August 4th. Look out for our review closer to the release date.

Senior Content Editor Mick has been playing games for over 30 years and writing about them for around 12. After drifting from site to site for a while, settling briefly at the now-defunct Made2Game and freelancing for the gone-but-not-forgotten NintendoGamer Magazine, he came at last to rest at Godisageek. Mick has been a reviewer, staff writer and content editor here for some time, while also moonlighting a little for Red Bull Games. He has 4 kids, has written 2 novels, and sometimes even manages to pay a bill or two. You'll usually find him defending the galaxy in Destiny 2, battling evil in Diablo 3, or lurking in the background on Twitter. Find him there @Jedi_Beats_Tank, or on XBL (JediWaster247), PSN (Jedi_Waster) or Nintendo (JediWaster).
MORE LIKE THIS
featHard West 2Ice Code Games