previous
Season: A Letter to the Future demo coming as part of Steam Next Fest
random
next
Goat Simulator 3 is coming to Fortnite
0 comments 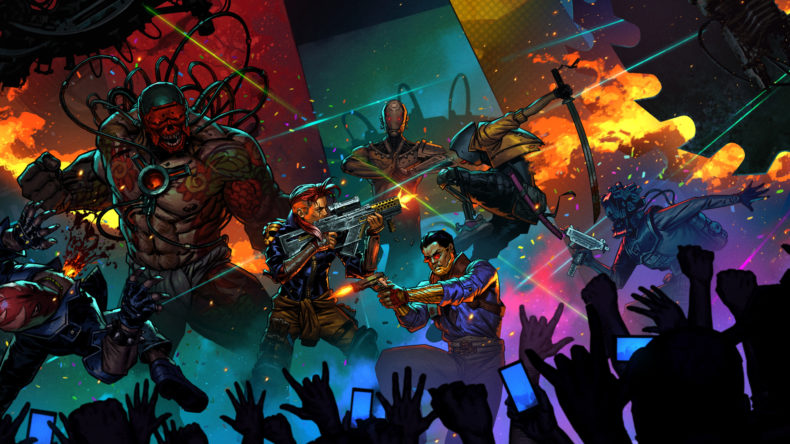 The world of Homicidal All-Stars is one of those near-future dystopias that seem way too plausible to be full parody. Like The Running Man, its world is one dominated by the media, where the best escape from the pressures of real life is losing yourself in the mindless bloodbath of entertainment.

In this punky, grimy future, the titular TV show is one of the most popular events online. Contestants enter a huge arena, where they will battle to the death against like-minded psychopaths and assorted scum for huge cash prizes. Although for Scarlett, the protagonist of Homicidal All-Stars, it’s much more personal.

Although not much is given away in the few cutscenes of the early game, it soon becomes apparent that Scarlett has very personal beef with Ulysses Derrick, the current champion of Homicidal All-Stars. Her climb to the final confrontation with him is fuelled by emotional demons and the ghosts of her past, and I was pleasantly surprised by just how much story there is. 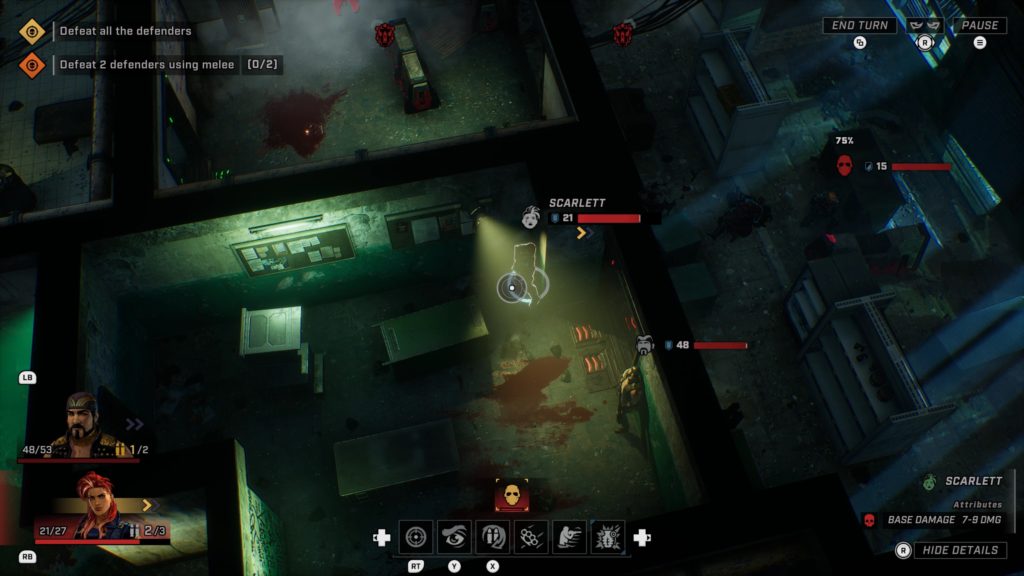 This is a turn-based tactical shooter more in the vein of Gears Tactics than XCOM. It’s less cerebral than the latter, with the gratification served in big bloody spades as you tear enemies to dribbly shreds of meat with shotguns and grenades. Combat takes place in cleverly-disguised grid-based arenas, with full and half-cover, as well as environmental hazards.

Each character who joins the party alongside Scarlett has different abilities. Marty Manson, a former champion, has a shotgun and a huge health pool, while Tybalt wields dual machine pistols and is able to use illusion tech to “swap places” with an enemy. We’ll let you discover the other players for yourself when the game is released. Each character can be outfitted with weapons, items like grenades and health kits, and modification chips that apply buffs such as increased HP.

As you battle through the various arenas, you’ll earn money with which to buy new gear, and Skill Points with which to unlock new nodes on each character’s unique skill tree. It’s a straightforward enough gameplay loop, and one that feels incredibly satisfying thanks to just how good the gameplay feels. On the surface, there’s not much in the combat that hasn’t been done before, but it’s presented with such obvious gusto that I couldn’t help but get invested. 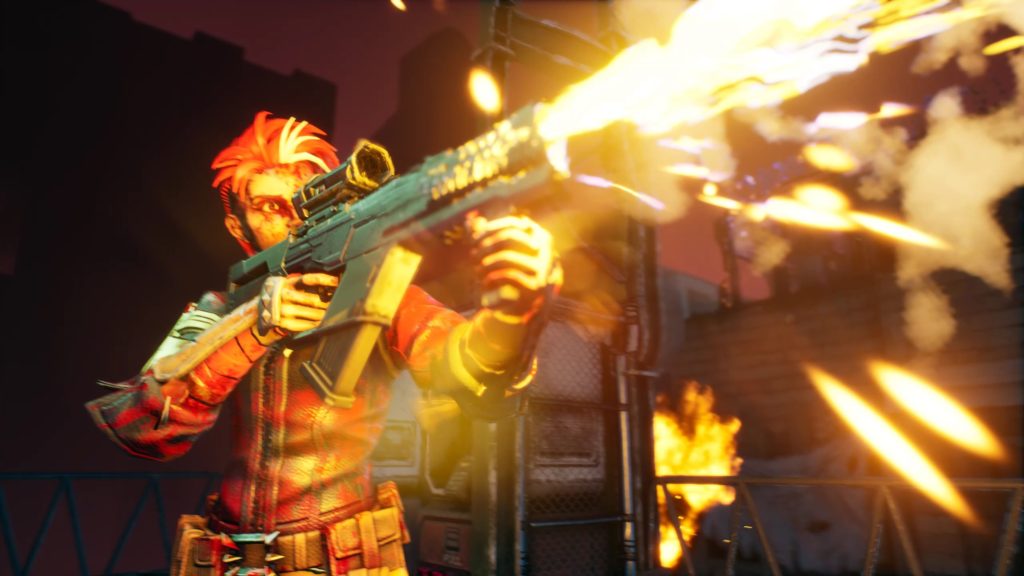 Characters talk to each other during the fight, while the commentator barks out a blow-by-blow account of every hit and miss. While it is beholden to the dreaded chance-to-hit, you can temper this by adjusting the difficulty if you choose to. I found that even on normal difficulty the chance-to-hit is quite fair, and the enemies miss as much as you do. A standard action points system dictates movement, while actions like reloading and healing can be done without penalty if you perform them before you shoot.

While I don’t want to talk too much about the kind of enemies, there seems to be a decent variety. From bog-standard “Scum” to the Fume who uses a smokescreen to avoid damage or the Ronin who does devastating damage up-close, each encounter forces you to mix up your tactics and use every tool at your disposal. Some arenas have hazards like speeding trains to avoid, or exploding barrels to exploit. 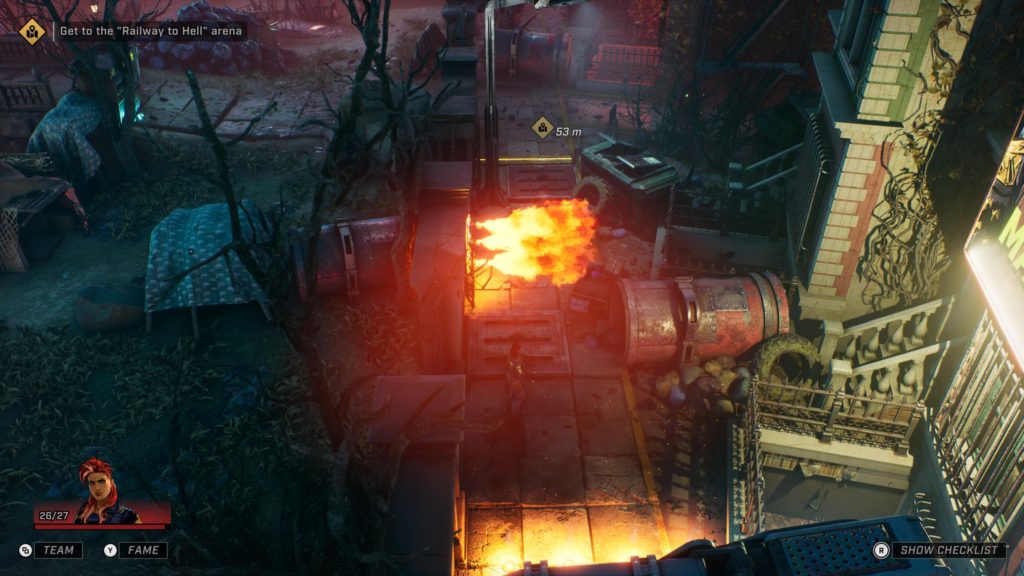 Interestingly, between combat encounters you’re given full control of your group of mercenaries, and can roam around the environment looking for reward stashes, and disarming traps. It’s an opportunity for your characters to chatter away, revealing their backstories and building relationships.

Spectators line these areas, baying for blood through bullet proof screens and less-secure chain-link fences. Now and then you can interact with one, who’ll often give you some disrespectful shit about not knowing who you are. When this happens you’ll have a few responses rated as good, bad, or cool. This affects your overall rating and helps determine which sponsors will back you. These dystopian corporations will provided permanent buffs if they support you, so it’s worth courting their attention. As your fame grows, so will the potency of these buffs.

There’s even a hub area you can wander around in when you’re not in the arena, chatting to your teammates and collecting lore on the world. How customisable each character is remains to be seen, as I saw no alternate outfits or cosmetics in the preview build, but you can adjust loadouts and upgrade and improve your weaponry. 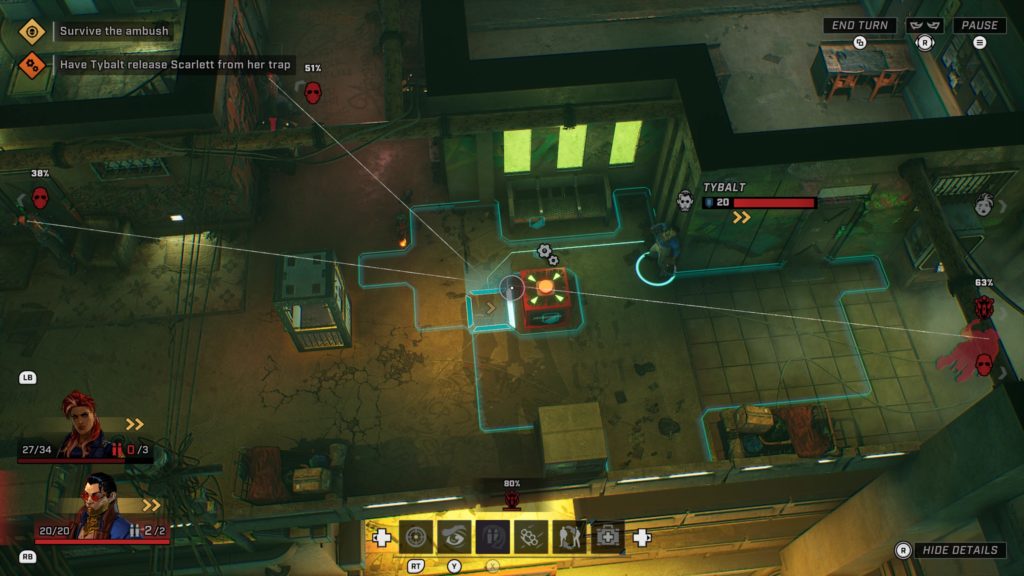 Homicidal All-Stars is the kind of game that made me instantly hungry for more. The mid-battle cinematics are well-made, the writing is solid if not particularly witty, and the characters are likeable and work well together. Combat feels fluid and satisfying despite a few visual jitters when it transitions to close up kill shots, and being able to roam around between fights and build your fame adds new layers to a familiar cake.

With a little time before release to iron out some of the bugs, Homicidal All-Stars has massive potential. It looks really good in motion, and if the full game can sustain the pace seen in the opening few missions, it could even earn a place alongside the best in the genre.

Senior Content Editor Mick has been playing games for over 30 years and writing about them for around 12. After drifting from site to site for a while, settling briefly at the now-defunct Made2Game and freelancing for the gone-but-not-forgotten NintendoGamer Magazine, he came at last to rest at Godisageek. Mick has been a reviewer, staff writer and content editor here for some time, while also moonlighting a little for Red Bull Games. He has 4 kids, has written 2 novels, and sometimes even manages to pay a bill or two. You'll usually find him defending the galaxy in Destiny 2, battling evil in Diablo 3, or lurking in the background on Twitter. Find him there @Jedi_Beats_Tank, or on XBL (JediWaster247), PSN (Jedi_Waster) or Nintendo (JediWaster).
MORE LIKE THIS
Good Shepard EntertainmentTurn-based tactics