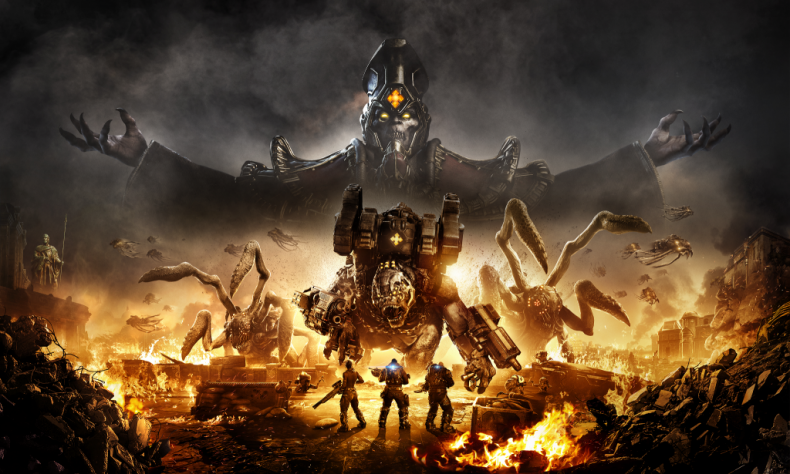 Of all the loud, shouty shooters you could choose to distill into a strategy-heavy action game, you’d be forgiven for putting Gears of War (or lately, simply “Gears”) at the bottom of the list. Often dismissed as big and dumb, it’s a franchise of over-the-top explosions, sweaty biceps and growled one-liners that has nevertheless stood for almost 14 years as one of the Xbox’s flagship properties. Still, it’s easy to overlook Gears’ storytelling and emotional depth when it does its best to hide it all under curb-stomp executions and meat-coated chainsaws.

And yet, here we are, faced with Gears Tactics, the result of pouring all that big, dumb Gears of War batter into an XCOM-shaped mould and nuking it in an oven made from recycled Lancers. What’s even more surprising than the fact that they made this game at all is that it’s such an exceptional pairing of genres. From the onset and throughout, Gears Tactics pushes the envelope, taking the turn-based, thinking person’s gameplay of Firaxis’ franchise and injecting it with a swaggering confidence that is purely, quintessentially, Gears.

A prequel set 12 years before Dom Santiago breaks Marcus Fenix out of prison in the first Gears of War, Tactics begins with Gabe Diaz (father of current series protagonist Kait Diaz), wallowing in self-imposed exile as a lowly transport mechanic. Away from the front lines of the Locust War and disenchanted by the Coalition’s frequent disregard for the sanctity of life, Gabe wants nothing to do with their warmongering ways – until he crosses paths with grizzled veteran Sid Redburn and Stranded leader Mikayla Dorn. Before long, the trio find themselves on the hunt for Ukkon, the enigmatic Locust leader responsible for creating Corpsers and Brumaks, amongst other toothy horrors.

In true Gears fashion the plot clicks along at a steady pace, and developers Splash Damage and The Coalition have fostered a handful of narrative twists and emotional story beats among the grunts and ooh-rah’s to catch you off-balance. For a tactics game it also packs in a surprising amount of cinematic cutscenes to keep you invested in the plot.

What’s both truly bizarre and hugely relieving is that, at times, you’ll forget you’re playing a turn-based strategy game at all. That may sound like hyperbole, but Tactics is so authentically, dyed-in-the-wool Gears of War that the genre almost doesn’t matter. Your Gears roadie-run from point to point and slam into cover, and when the camera shifts to an over-the-shoulder perspective for a critical hit you’ll swear you’re seeing the old Gears you know and love. But it’s not just about authenticity and familiarity; it’s also about confidence, and this may be the first game in this genre that can genuinely teach XCOM a thing or two.

You’ll usually field a squad of four, but that changes dependant on the mission. Sometimes you’ll deploy a single Gear into a map, and will need to find and rescue allies as you go. Each round your units have three action points to spend on moving, shooting, using an ability and reloading. The addition of the third action point makes a powerful difference, as you’ll often be outnumbered three or four to one by the Locust forces. Your squad will be comprised of a combination of five distinct classes: Support, Vanguard, Heavy, Sniper and Scout, who bring a variety of skills and abilities to the battlefield.

For example, the Sniper is pretty self-explanatory, but the Vanguard is a full-frontal assault trooper able to buff itself and allies, while Support can use Stims and Stim Grenades as well as healing abilities, and the Scouts carry Gnasher shotguns and can enter into a cloaked state to move undetected. Each class has four fairly compact skill trees branching out from a central hub skill, and specialising in any tree creates a lethally efficient presence on the battlefield, whilst cherry-picking abilities and upgrades offers a great deal of flexibility.

I’m not sure yet whether theory-crafting is possible or useful here, but there are so many skills that not only stack with each other but work together across classes that there’s genuine potential for build diversity, especially once you have an established go-to squad. More often than not you’ll be using Gabe, Sid or Mikayla in most missions, but the empty spots are filled up with fully customisable Gears who you recruit or rescue along the way. These troops can be tweaked and altered with a huge variety of cosmetics that grows as you advance the story, throwing up anything from blue-dyed mohawks to eye-patches, full-sleeve tattoos and handlebar moustaches. The level of customisation is impressive (and there are no microtransactions whatsoever), and helps you become fully invested in the plight of each soldier – so much so that losing one in a mission is painful, and not least because you’ll need to train and level a replacement. XP levels come pretty slowly, too. You unlock two skill points each level and can respec if you’ve earned the credit to do so. But on top of this, tiered loot offers better armour (torso, legs and head) and a selection of mods and add-ons to each weapon which, for instance, increase accuracy or damage, or add passive skills that reduce grenade cooldowns or increase regeneration.

As you move across the battlefield it’s easy to forget there’s a grid system at work, as environments look as though they’ve been lifted directly from the Gears series, complete with waist-high cover and multiple choke-points. Overwatch is a joy to behold, as each of your soldiers will simply fire until their ammo runs dry at any unit who ventures into their view cone. It’s a tactical manoeuvre that’s far more than just something to do with the last action point. Setting up a cross fire and letting the enemy come to you, or forcing them to advance on a chosen front, are viable tactics, but the enemy has all the tricks you have and Locust snipers that pin down your soldiers or enemy troops who weave patterns of bright red kill-zones over your squad are a menacing challenge.

Emergence Holes spew new enemies onto the battlefield, or else troop-carriers drop them off, and every Locust from the previous titles makes an appearance, from tickers (yes, you can kick them) to Boomers. Objectives vary by mission and side mission, and range from simple sweep-and-clears to rescue missions, supply runs, sabotage operations and scavenger hunts conducted as Nemecysts nuke the level behind you, block-by-block.

The highlights, though, are the boss fights. These multi-stage battles against single, huge enemies like the Brumak and Corpser keep you constantly moving and balancing your skills and abilities, while fending off reinforcements of standard enemies and dodging devastating area-of-effect attacks. Each of these had me on the edge of my seat throughout, and are yet another example of the developer’s ability to take risks even outside their comfort zone.

Sadly you can’t replay missions as and when you choose, and so there’s no option to over-level your squad to make future encounters easier, and a checkpoint autosave system puts paid to easy save-scumming. While permadeath is a feature, each of your Gears has a second wind ability that allows them to self-revive once, while certain skills allow them to revive one-another when downed. Executing enemies, on the other hand, will always refund an action point unless a mission modifier says otherwise. You will feel less helpless and more in control here than in any other turn-based tactics game, yet the difficulty remains a steady challenge throughout – and if it’s not tough enough for you, you can always ramp it up to Insane at any time.

Running Gears Tactics on a GeForce RTX 2060 Super graphics card I only noticed an occasional slight dip in frame rate, even with everything set to Ultra or maximum, and the added textures, reflections and shadows add a heap of depth to the world. The detail in the environments and character models is exceptional, though I will say that the cutscenes don’t seem quite on par with Gears 5. Almost, but not quite.

Even in the dark and desperate moments where the enemy is encroaching, my units are pinned by snipers and I can’t land a hit to save my life, Gears Tactics is exceptionally good. Sure, every minute of downtime between missions is spent altering your soldiers’ hairstyles and armour tints as opposed to, say, building and upgrading a base, but there’s enough content here (and of a wide enough variety) that all you’ll want to do between missions is get to the next mission.

Gears Tactics does an incredible job of mixing loud, brash action with strategy and caution, to deliver one of the most satisfyingly playable games of the last few years. Everything about it oozes confidence, from the story and mission design to the fast-paced, flashy combat. This is more than just another tactics game, and far, far beyond a re-skinned XCOM. It’s Gears of War all the way through to its Emulsion-soaked core, and arguably sets the bar for the genre going forwards. Yes, it’s big and brash and loud at times, but it’s also deep, intelligent and balanced, with all the heart and passion we’ve come to expect from a Gears game.

Gears Tactics is big and brash at times, but it’s also deep, intelligent and balanced, with all the heart and passion we’ve come to expect from a Gears game.

A Gears of War movie is in the works at Universal