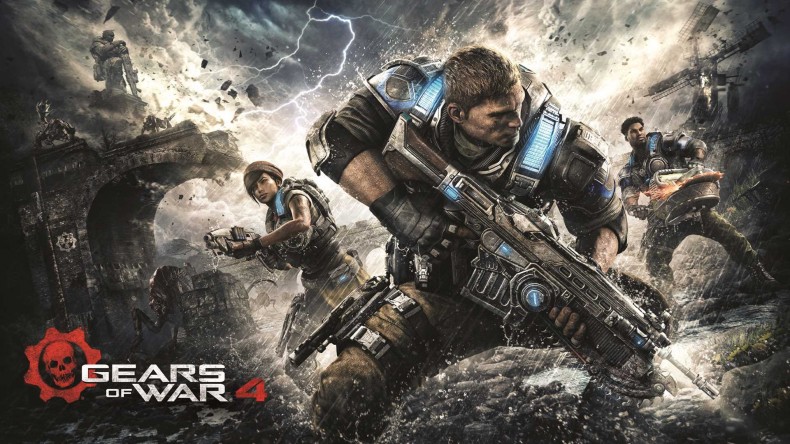 Arguably EPIC’s favoured child, Gears of War has always been about going in hot, going in loud, and pretty much every other euphemism for blowing shit up and chainsawing things open. It has always been unashamedly brash and brutal, willfully destructive and knowingly macho. On the few occasions that it has aimed for (and nailed, if I’m honest) emotional story beats, it has done so with a ceiling-gazing, eye-blinking stoicism. It is not a subtle franchise, and has never pretended to be anything other than frantic, explosive fun with a side order of big, manly tears.

Gears of War 4, from developers The Coalition, feels immediately like a Gears game. That sounds like a stupid statement, but the simple truth is that this franchise has always had a unique feel. Gears 4 is more tactile than any other shooter, even other third-person cover shooters, and everything you do has a distinctive heft and weight to it. Explosions rattle the screen, of course, but so does the simple act of slamming your body into cover. Played in a darkened room (watch your eyes, please) with a good headset (and your ears), this is, pound for pound, the most immersive shooter available – and that’s no hollow claim. There were moments where I became so engrossed in a firefight or set-piece that I found myself coming out of it like a fog had lifted; I realised I was perched on the edge of my seat with two numb arse-cheeks, a dry mouth and watery eyes. The action picks up a couple of decades after the end of Gears 3. The Locust were defeated, and the Coalition of Ordered Governments (COG) have been rebuilding the world of Sera with the help of robotic workers and special “fabricators”, essentially 3D printers able to create pretty much anything, from construction materials to working guns and ammunition. It begins with Chairman Linn, the COG’s new leader, commemorating the heroes of the recent conflicts, from the Pendulum Wars to the Locust War and Lambent Crisis. Her retelling serves as a batch of tutorial levels as you relive decisive moments in each conflict, and get to see some welcome returning faces in the process.

Without risking spoilers, the main character is Marcus’ son, JD Fenix, joined by his best friend Del, outcast warrior Kait and a handful of other characters such as Kait’s uncle Oscar, played by a grizzled old Jimmy Smits, and of course Marcus himself, whose family chemistry with his estranged son makes for some genuinely funny dialogue. In fact, the writing and delivery is on-point throughout, with Spartacus’ Liam McIntyre voicing JD with a Nolan North-a-like charm and the supporting cast communicating primarily in quips and yelled expletives.

And it’s a fairly talky game, too. Firefights are framed by short periods of walking and talking, and whenever you reach an area with waist-high obstacles and ammo packs, you can expect another fight. It’s so familiar that it’s both comforting and a little too safe: Gears 4 rarely springs a surprise on you, instead adhering to a tried and true formula that’s exactly like slipping into a pair of comfortable old military-issue armoured boots. You’ve been here before, and the minute to minute combat either with the Shepard Bots or the new monsters is mostly as expected. Only the Pouncers really change things up: these beasts (as seen in the trailers) fire deadly quills at you, and jump from cover to cover, knocking you away from it as they land. They can also pounce directly onto you (or another character), and you only have a few seconds to escape. Weapons are just as heavy and unwieldy as they ever were. Sniper rifles kick like mules, shotguns buck in your hands with a satisfying snap, and it takes an effort of will to maintain a single target with the various Lancers and other automatic weapons. It might frustrate some, but it’s a design decision that seems conscious, and makes the gunfights feel that much more authentic and dangerous. It can be a pain trying to use the brutally cool chainsaw though, as over the shoulder melee is anything but precise. Chainsaw kills are messy, frantic, satisfying, but always feel a little hard-won in the midst of a battle.

The new Close Quarters Combat moves suffer from a similar issue. On paper, slide tackling and drop-kicking enemies over cover sounds really cool, but in practice the infamous “Roadie Run” is hardly precise, and performing any kind of agile manoeuvre when coming out of it is a bit of a nightmare. That said, when it works it really works, and dragging enemies over cover before executing them is about as satisfying as it comes. Slightly disappointingly, there aren’t a whole lot of new weapons this time around. The new Embar sniper rifle seems a little pointless as it’s no more powerful than the Longshot but takes a couple of seconds to charge and fire. The buzz-saw, on the other hand, is almost quintessentially “Gears”, if that makes sense, since it literally fires whirring saw-blades at the enemy. Alongside them we have several variations of the Lancer, either with chainsaw or bayonet, a double-firing shotgun called the Overkill and a handful of heavy weapons that can only be fired when stationary. Still, more ways to kill are more ways to kill, and the overall arsenal is still brutally efficient.

Unfortunately, the multiplayer has never been more impenetrable. Even pre-release, players are too already too good, and completely dominating the matches. There’s little The Coalition can do to fix this save a complete overhaul, but those thinking this might be the game that gets them into the series will be mistaken. Multiple modes are present as always, and the ability to add bounties (as in Horde) to your competition mean you are always fighting for something, even if it’s just trying to climb up the persistent level ladder. The maps are well designed, though it might be time to retire Gridlocked, because while the new ones are good, they never quite approach the quality of that original fan favourite, and all it does is serve to bring that to light. That said, the doubled framerate from the 30fps of campaign to the 60 of multiplayer is a major boon, basically you’ll love it or hate it all over again, here. The easiest thing to do is to jump into the social playlist and just get exploring, you’ll soon know if it’s for you or not. Aside the stellar campaign and competitive multiplayer, Gears 4 also sees the return of Horde Mode, a five-player cooperative game that has benefited from several overhauls. For a start, there’s now a class system in place to make sure everyone has a job to do on the ground. Engineers, for example, can repair turrets and defences; Scouts collect double power during combat; Snipers control the battlefield from a fixed position, while Heavies dish out explodey pain in huge, creamy dollops. There’s a synergy at work now, and when you’re up to your neck in it beside your friends, and everyone is taking care of their job, it’s sublime.

Task one is always to place the Fabricator somewhere safe, followed by spending power to create defences including gun turrets, decoys, shock traps, and gun lockers (in which you can store a fully-loaded back-up piece, y’know, for close encounters). Then the timer counts down and you fend off wave after wave of enemies. By now, Horde Mode requires no further description, but this time around it feels like the culmination of the initial idea. It’s slick and fluid and ridiculously addictive; the teamwork element is tighter, the mix of classes make it much more tactical and the addition of Bounty cards and modifiers introduces even more depth to an already excellent game mode. You’ll come for the campaign, but you’ll stay for Horde.

It’s worth mentioning that alongside titles like Forza Horizon 3, Xbox One has suddenly, inexplicably, become the leader in making things look pretty on console. On a 4KTV it is astonishing to look at, but even without the benefit of an Xbox One S and 4KTV Gears of War 4 is stupendously attractive. Cutscenes are incredible, the environments are highly-detailed, the weather effects are on another level and the lighting is, quite simply, some of the best I’ve seen. Once the visuals are combined with the sound direction, it all becomes something of a feast for the sense. Atmosphere drips from every grimy surface, rattles in the reverb of every spent round, howls in the screaming ululation of each devastating windstorm. It’s a masterclass in presentation.

If there’s a complaint worth making it’s that the story never really gets going. In many ways, this installment feels like a set-up for what’s to come; it feels like Part One rather than its own beast, and as such it lacks some of the tension and immediacy of previous entries. Reading that back it seems an almost silly complaint to level at a Gears game, but it’s noticeable because in the past each entry has had a recognisable beginning, middle and end, whereas 4 never loses the sense that it’s prelude to something greater.

But let’s be honest, you didn’t come for that. You came to take down a Corpser with the Hammer of Dawn; you came to battle a twenty-ton troop plane from the back of a motorcycle; you came to pursue a monstrous beast through an ancient wind-blown castle; you came to chainsaw Locust in half, scratch another grub and close those damn E-Holes. That’s what Gears of War 4 is all about: bombast, spectacle, explosions, blood, guts and carnage; not so much strumming on your heartstrings as stomping up and down on them. It might not be agile, but it’s pretty, it’s clever, it’s honest, and it’s a ton of fun.

Gears of War returns with a bang. Consistently thrilling and relentlessly entertaining, Gears 4 is comfortably one of the best shooters of the generation so far.

You may also like
Gears of Wargears of war 4PC