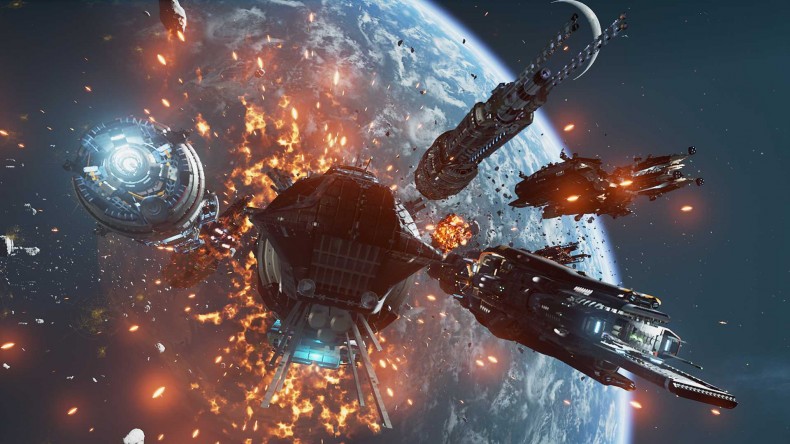 MOBAs are commonplace these days, but games like Fractured Space are not. Participating in strategic battles with gargantuan spaceships is gruelling and compelling, with tactics playing just as much of a role as firepower and aggression. You can’t just shoot your way to victory, and there is no reliance on who can fire their cannons the fastest; instead, your wits are your strongest weapon and making sure you choreograph every single decision to perfection will guarantee you a good chance of victory.

Fractured Space’s main mode is Conquest, and it contains some standard ideas, but the way they feel so well structured makes each battle intense and full of conflict. There are five zones in each game, including two outward zones called Alpha and Beta, the Gamma zone, your home base and the enemy base. At any one time, depending upon it being ready, you can jump to each one of the zones (think when the Battlestar Galactica used its FTL drive) via your jump drive. The gamma zone is an area in the centre of the map, and at certain points in the battle you can jump to it and fight for specific buffs, each one providing perks to you and your allies. A timer pops up and lets you know how many seconds are left before you can jump, and the actual fights inside the Gamma zone can provide some pretty intense moments.

By taking over the forward stations in both Alpha and Beta, seizing the enemy base at the top of the map becomes a lot easier. What can be both a joy and annoyance about Fractured Space is the sheer length of each battle. If the other players on your team are playing properly and not messing about, matches can go on for in excess of an hour. These fights are well worth your time though, mainly because of the different tactics and strategic plays you can make that keep each game different from the last. There are plenty of ships to choose from, each with a rating for its attack, defence and utility (how it can support or heal your fellow ships). Some provide fantastic support like the Disruptor, whereas others have a strong attack with a respectable defence like the Reaper (my original ship of choice). On top of that, each ship has crew cards which have additional stats to aid your attack, and each character in your crew has their own personality and voice. You’ll often hear them giving you advice throughout a battle, and you end up getting attached to them, as if they’re the Starbuck and Chief to your Adama.

We can talk about the ins and outs of the battles and how you win, but it’d mean nothing unless the actual battles were enjoyable. Commanding my ship, deciding on whether to go for the next mining station or approach the forward station even though I know there’s more risk involved provided a genuine buzz. The first time I knew Fractured Space was something special was when two ships in my fleet (a Colossus and a Pioneer, I believe) went head-on towards the Beta forward station, while I chose another route of attack. There were a lot of large rocks floating in the section I was in, and provided plenty of cover for me. I soared much higher than the other two ships, giving me just enough of an advantage to rain down a bunch of my Reaper fighters to lead an attack. As they flew down, I fired my cannons and saw the defending ships’ shields get destroyed, subsequently exploding into pieces. I had to think about the range of fire on my cannons, the speed at which the enemy ship was moving, and whether or not my support could take the hits they were receiving, among other things. There’s plenty to dwell on, but when you are successful it makes all the hard work feel like it was worth it.

Fractured Space is a tense 5v5 MOBA, and the fact it’s free-to-play makes it even better. Conquest can be great fun, but it would be nice to see a few more modes come into play later down the line. Thinking about how you approach every battle and making sure you have the right weaponry and crew to aid you adds a lot more depth than you might expect. There are over 40 ships for you to control (providing you’ve got the cash and time to unlock them) and a wealth of upgrades, making Fractured Space a surprisingly entertaining game.

Considering that Fractured Space is a free-to-play MOBA, there’s a great strategy involved, providing some really tense firefights on the battlefield.

Fractured Space hits half a million users on Early Access

Fractured Space to Debut at Insomnia Games Festival This Month