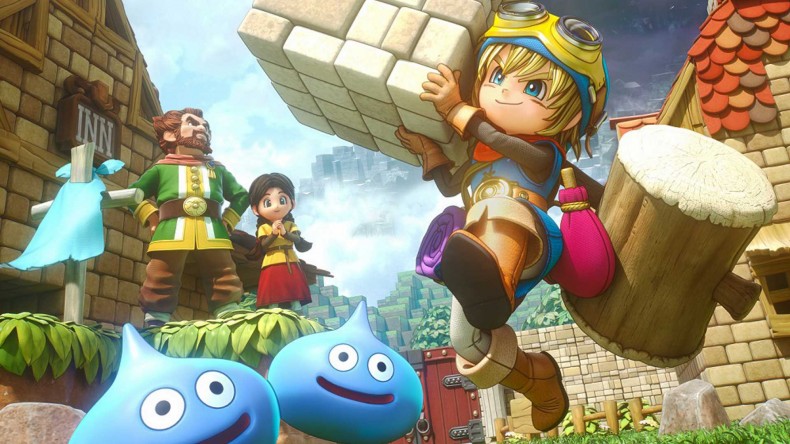 Dragon Quest Builders was a bit of an eye opener when it was unveiled. I mean, it’s no surprise that everyone would want a bit of the world-builder pie in gaming, but despite its obvious inspirations Dragon Quest Builders looked like it would certainly have its own personality away from its Minecraft-esque structure, and it does.

Your avatar wakes up in a dark cave with a voice speaking to them, urging them to fulfil their destiny. It appears some sort of cataclysmic event has occurred and you’ve been asleep for a long time. After guiding you through a brief tutorial on the basics of building and gathering materials the voice guides you outside where you’re greeted by a world seemingly devoid of human life. Whatever event befell the world has decimated all civilisation and sent the survivors into hiding. This is your destiny: rebuild the world.

And that is probably the key distinction between Builders and Minecraft; here, you’re not so much building as rebuilding what was there before. Spurred on by the voice from above you’ll go from location to location to recreate what was there, and help the humans reclaim their foothold in the world. And you’ll do this by talking to the people who come to live in the towns you make and fulfilling their multitudinous requests for improvements to their living arrangements. You’re a dogsbody, but you’re a dogsbody of hope. It’s this structure that gives Builders it’s next big difference to Minecraft. This is basically an Action-RPG with building elements, full of quests to undertake, monsters to slay, and a story to unravel. As someone who has played videogames for nearly three decades I know that if I’m told to go and find my own way in something I’ll invariably do nothing. This is why sandbox games don’t tend to appeal to me. With Dragon Quest Builders I’ve found it more fulfilling taking on the requests of my town’s populace and watch the place flourish as a result.

With each quest comes something new. A new way of building, cooking, smithing, mining – everything you do earns you something new. As you move around the worlds you’ll encounter new materials, pick them up and your character will instantly know what exactly he can do with them. Creating and building lacks the nuance of Minecraft, so you won’t find people building working hard drives and the like, but the systems here are more streamlined and are explained so well that you’ll never be at a loss for what you need to do.

There’s nothing stopping you from playing in a freeform way either. You can just ignore the requests of the townsfolk and go around doing what you want to do. Even as you’re moving from place to place you’ll come across the occasional bolt-hole or cave you can turn into a temporary, or even semi-permanent, home should you choose to do so, just while you partake in a little bit of gathering. Unfortunately you can’t just up sticks and move out because there’s no autosave feature, and the town’s banner is your save point, meaning that return trips are necessary should you want to play something else. But the primary hook here is seeing your town change and grow. The people themselves will cook and create things in your absence, giving you a plethora of things to decorate your town with upon your return, so, as the town grows so do the people in it.

The world of Alefgard is rather lovely to look at, despite being made out of cubes. But the colourful, cartoonish aesthetic makes the game a lot more inviting than Minecraft’s pixelated appearance. Furnishings and decorations come in a variety of shapes, giving things a more natural look, which also improves the appeal. It’s really quite nice to build those inexplicably laid out houses that you find in the Dragon Quest series.

While the game is nice to look at, it’s unfortunately been given a camera which struggles to frame the world adequately. The third person viewpoint is nice and all, but it makes aiming for placing items and attacking difficult. Also entering structures with a roof can leave you flailing the camera around desperately trying to make it realise that it needs to adjust so you can actually see what you’re doing. It’s not a deal breaker, but it’s a frustrating problem when it does rear its head.

It isn’t helped by a rather odd control system that takes some getting used to either. Cross opens up the system menu but also interacts with stuff, Square uses the highlighted hot bar item, Circle jumps and Triangle attacks. Then L1 and R1 aim up or down when attacking or placing items. Many hours later I was still confusing up and down, opening my menu when I wanted to use my workstation and using healing cream when I wanted to be attacking. Other people may get used to it quite quickly, but it’s certainly something that requires you to grow into it.

As much as I shouldn’t keep mentioning Minecraft, on thing that has been sadly omitted is co-op. It would have been really nice to be able to wander around with a pal, doing quests and fending off beasties, especially as the Dragon Quest series regularly has you adventuring in a party.

Still, if you’re put off by a world textured in pixels and you’re the type of person who wants to have purpose in what you’re doing then Dragon Quest Builders is the world builder game type you want. It really is quite something how furnishing a game with a structure and a pleasant aesthetic can alter your perception of a genre, but that’s what Square-Enix have done here. It’s not going to feature in kids schools as a teaching aid and you won’t see column inches dedicated to the latest ridiculous build project, but that’s not what it’s here to do. It’s here to provide an experience for those who don’t want that Sandbox style of play, and for that I love it.

Relaxing and compelling, with Dragon Quest Builders if you’ve struggled to get into the genre with building games in the past this might just be the game that changes your mind.