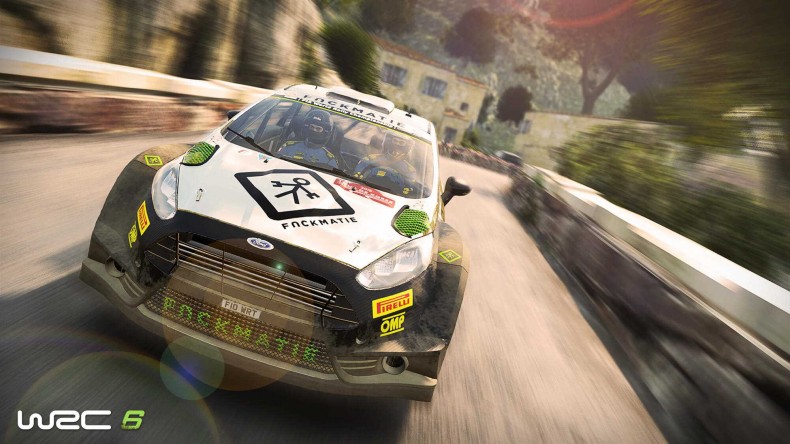 With winter approaching, bringing most circuit-based motor racing seasons to a close, it’s time for the rally drivers to take centre stage. Or should that be special stage? Either way, the World Rally Championship is the pinnacle of dirt and gravel racing, among other surfaces. These men and women drive at insane speeds, on dirt roads and country lanes that are no wider than the footpaths you might stroll along on a Sunday morning, and sometimes they do it in the pitch darkness of night. It takes a special blend of bravery and madness, coupled with extremely honed reflexes, to take part in the sport, and all the aid the drivers have is a co-driver, map and notes in hand, to warn them of turns and dangers.

With Dirt Rally released earlier this year, a new rally game is always going to struggle against the might of the developer that brought us the Colin McRae games and the Dirt series, but Kylotonn Games did a decent job with last year’s WRC 5, and the team is back for another turn at the wheel. Without having to cater to the last generation this time around, WRC 6 is allowed to unleash all the tools available for the current generation of consoles and although it’s not the smoothest of rides, it’s a definite step up from last year’s model. This upgrade is immediately apparent in the visuals, with cars having much more detail on them now, and although the backgrounds are never going to reach the quality of Forza Horizon 3’s Australian outback, they look a lot more natural than in WRC 5 and the lighting is fantastic. During night races, your headlights illuminate just enough for you to see, and every stone and leaf casts its own shadow and it really does enhance the almost claustrophobic feeling of driving at 90mph through a forest at night. Something many rally games fail to get right, however, is the massive dust clouds that billow in the car’s wake. It may seem like a trivial matter but it’s crucial to the visual fidelity of a rally game, and it’s something WRC 6 absolutely nails. Its particle effects in general are impressive, actually, and this attention to detail is present throughout the game. Camera helicopters hovering low down will blow dust around, hindering visibility, and mesh barriers that line the track will actually flow over the car if you collide with them, which is a nice change from the horrible clipping that usually happens.

It’s inevitable that you’ll collide with barriers, if I’m honest. It’s part and parcel of learning where your limits are, since this is not an easy game, as you might expect from driving at such high speeds through narrow roads. The game begins with a brief tutorial, which strangely omits the co-driver for the first half, whether on purpose or via a glitch (I’m not sure at the time of writing). You’re given control of one of the most powerful cars in the game too, so it really is a trial by fire, but don’t let that put you off too much. After you eventually make it through, the game will tailor the difficulty depending on your performance, but also allow you to make tweaks to those settings before you jump in. Do you want to race against the hardest AI from the start? Go for it. But this doesn’t necessarily mean that you’re a master of realistic handling, so you can still stick all the assists on and enjoy the game. It’s actually quite accessible, which makes the harsh introduction all the more baffling. Once you get into the game proper, there are a few options available, with solo games ranging from the full career mode to custom championships and single rally stages. The multiplayer was either unavailable at the time of writing, or was very unstable as multiple efforts to find a game yielded no results. Like the previous game in the series, it also offers timed online events (the first doesn’t start until launch day) in which you’ll be required to complete an event with certain challenges, the first of which takes away the use of the handbrake, an essential tool for hairpin corners. It forces you to adapt to the situation and think a bit more carefully about your approach to each stage.

The career mode is where the game comes to life, as you create your driver (well, you get to name him and select his nationality) and begin the journey from WRC Junior, through WRC 2 class and eventually up to the WRC itself, aiming to take away the biggest prize at the end. Once you’ve selected a team to race for, you’ll be dropped into your first rally weekend, which usually consists of six or seven stages over three days and will vary wildly in difficulty and complexity, and even surface type. Each day will offer a number of stages, but you can only repair your vehicle between days, meaning that you really need to look after your car. Repairs can only last 45 minutes though, and each repair will eat a chunk of that time. Going over that time will result in a time penalty that can basically end your chances of a win if you’re not careful, so it has a kind of risk/reward thing going for it. Actually driving the cars is great fun, thanks to a handling model that is both realistic and accessible, bringing back memories of the old Colin McRae Rally games on PS1. The physics feel mostly right, with cars handling each surface type as they should, whether it be sliding over dusty gravel, or gripping tarmac, you’ll learn to adapt accordingly. Weather is also a factor, with fog and rain hindering visibility in the extreme, which is not fun at all, to be quite honest. That aside though, throwing your car around corners and fighting to keep the back end in check is incredibly fun in most other conditions, even if you’ll almost always get something wrong and slide into a barrier or tree. Slide too far off the track though, and the game will reset you back on the track with a time penalty of around ten seconds. It’s harsh, especially as the distance seems inconsistent, sometimes penalising you for going only a few feet off the track, not even giving you a chance to get back on yourself, but most of the time it makes sense. If you reset your own car however, the time penalty is much less severe, but you only really need to use this feature if you’re truly stuck.

If all this sounds a bit boring, or a bit too technical (another way of saying it’s boring, really), it’s probably because, unlike the F1 games for example, WRC 6 won’t really appeal to anyone outside of rally fans and a few driving game enthusiasts like myself. It’s a great game that honestly does offer the fun of those old Colin McRae games, but its presentation is a little too clinical and so the wider audiences aren’t likely to be flocking to WRC 6 like rally fans at the side of the track. Make no mistake though, this is a very good game that deserves a little more time in the spotlight.

WRC 6 is a great addition to the series and is genuinely good fun, but despite its accessibility is still only likely to appeal to fans of the sport.