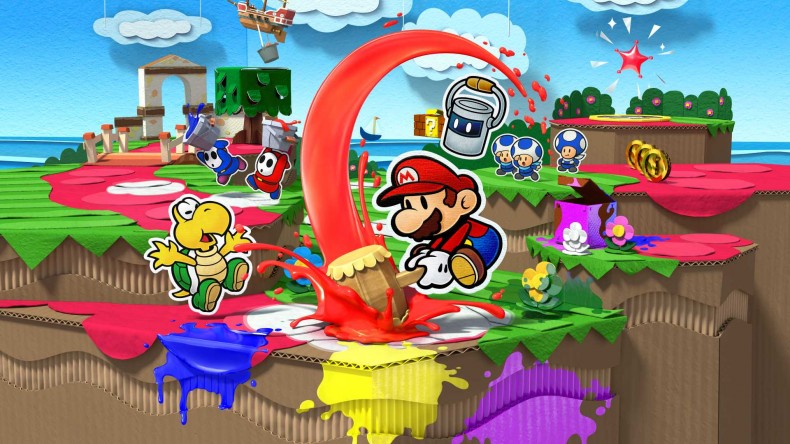 It’s a dark and stormy night in the Mushroom Kingdom when Mario hears a rap on his front door. You’d think that Mario wouldn’t believe his luck that for once Princess Peach has come to him, but alas, she bears a blank letter that happens to be a colourless Toad from a town across the sea; something fishy is going on, and Peach wants Mario to find out what.

This version of Mario’s world is formed entirely of paper or card, and the lifeblood that runs through everything is paint. Arriving at Port Prisma our intrepid travellers find out that Shy Guys are terrorising the place, sucking the coloured gloop out of everyone and everything and essentially freezing stuff in time, restoring paint to the item or person brings said object back to ‘life’. Color Splash has Mario flanked by sentient paint can Huey as they venture across Prism Island looking to restore colour to the world and the evil (Bowser, obviously) that plagues it.

Like previous Mario RPGs, Color Splash is complimented with a sharply written script, as you explore Prism Island you’ll meet a wonderful cast of characters – from postal workers to superheroes – and barely one goes by without some sort of quip that’ll have you giggling madly to yourself. It’s never afraid to poke fun either at itself or at the legacy of the characters that make up its cast (a spot of paranormal activity has a bunch of Toads hankering for the taller brother and Peach keeps Mario up to speed of her whereabouts ensuring he is not frustrated by an ‘another castle’ message). It isn’t easy to be consistently funny over a long period, but here, more laughs are delivered per hour than almost any other game; it’s excellent work and a true credit to the writers and localisers. The tried and tested platform-RPG structure once again returns here, with you guiding your 2 dimensional plumber through a series of 2.5D courses punctuated by semi-RPG style battles. What’s interesting here is that Intelligent Systems are never afraid to flip the script and do something different. Some courses can be completed with no fighting at all, some battles are fought against single large enemies while others see you up against a horde of diminutive goombas; many times, checking the environment can lead to a very cost effective way to clear an enemy group. Boss battles also change things up and are more like puzzles requiring you to figure out what particular combination will open up the enemy to a devastating attack.

In a world where paint is literally life the stuff comes out of pretty much everything. Hitting scenery causes paint to be deposited on the floor for Mario to pick up and replenish his supply. You’ll need to use it to repaint colourless spots within the worlds, which result in coins to pick up or cards to collect, which are how you attack within the battles. Each turn sees you select which card you want to attack with, you then need to use paint to colour it in and then flick it into play to fight. Each attack can then do extra damage by pressing A at the right time to prolong the damage, plus the more paint you’ve used on the card the more hurt you’ll pile on. It’s a fairly decent system: the cards come in several distinct flavours – jump, hammer, flower power, ally and more – which will be very familiar to Paper Mario veterans; these are complimented by ‘Thing’ cards. ‘Things’ are dotted about the landscapes and are like ‘real’ objects in a land of paper. Fire extinguishers, ice picks, piggy banks… all these can be found and squeezed into a card, which can then be used in battle with a huge special attack that can either change the course of battle in an amazing way or have specific uses within the courses themselves to solve puzzles.

The problem with the battle system though is the fiddliness of it all. Having to select a card then press a button, then paint it, then press a button and finally flick it had me regularly forgetting to do one part of the sequence, and it never ceased to frustrate me. This probably stemmed from the fact that when playing on the TV my attention was split between it and the gamepad, and as such I would miss a step and have to look back down and do it again. When I was using off TV play (such a great thing) this problem was all but eliminated.

Colour Splash also isn’t helped by a camera that can’t be moved or adjusted in any way. Granted, it frames the papercraft worlds beautifully, but on regular occasions set dressing would obscure environmental elements that you kind of need to see, like jumps or colourless spots. Colourless spots are probably the more annoying of the two, as it’s hard to line yourself up just right to hit them in one shot, and you can end up wasting paint with more than one hit on ones you can see, let alone the ones you can’t due to an errant tree.

I can’t bitch and moan about that too much though, as the rest of the game is just so damn good. It’s really nice to put myself in front of a nice, colourful, happy game. Oh, and then there’s the music. Koji Kondo’s score is an absolute delight to listen to. The sad trumpets if you get attacked during a fight instigation to the way the music starts to waver if your health gets critically low, it’s sound design par excellence and I guarantee you’ll catch yourself humming any one of the tunes at all times.

Colour Splash is just another in a long line of great exclusive games for Nintendo’s beleaguered Wii U system, which will soon be replaced by the upcoming NX. It won’t be played by as many people as it should, and that’s sad. It’s not going to be a system selling title, but Wii U owners owe it to themselves and to Nintendo to play this.

Minor crinkles can’t stop Paper Mario from being a frankly excellent experience and one that you, yes you, should play.