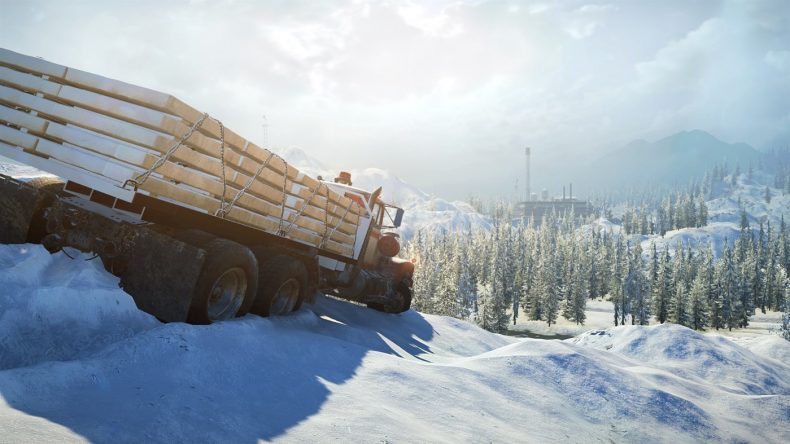 MudRunner was something different in the driving genre, a strange mix of truck driving simulation and off-roading that somehow ended up being one of the most relaxing games I’ve played. It wasn’t perfect, neither was its American Wilds expansion, but both offered a satisfying delivery experience well before Kojima tried his hand at off-road delivery games.

Saber Interactive has returned to its series, this time moving even further afield as it heads out to Alaska in SnowRunner. Much like MudRunner, this new game has you driving in trucks and various other utility vehicles, taking on jobs to deliver goods and discover Watchtowers to help plan your routes. You’ll also be finding missing trailers and reconnecting the communities of each area, whether in snow or mud, giving the game a little more of a true open world feel.

The great thing about this series is how laid back it is. You’re not rushed, you are free to take on as many jobs as you like, with some even requiring the use of multiple vehicles. During one early trip, I used a truck to pull a fuel tank trailer, stopping along the road when confronted with a broken bridge or a rockslide that blocked the route. Then I jumped into another truck, this one with a walled flatbed on the back, to bring in supplies to open up the road. I even used my Scout, a nimble utility vehicle, to unlock Watchtowers along the way and make sure the road ahead wouldn’t leave the fuel tanker bogged down in deep mud. Strangely, however, considering the title, you don’t really get to experience much in the way of snow for quite some time. During the tutorial, you can head over to Alaska for a moment, before you’re essentially told you shouldn’t be here yet, go back to Michigan. You can still have a look around if you want, though, as the game is very open to letting you do whatever you feel like doing. Well, you can try, but it will likely result in your truck being bogged down in the snow and unable to move. Thankfully, you can recover the vehicle via the Function menu, which sends you back to the area’s garage.

In many ways, the Alaska issue mimics the issue the original game had, in that you’re not really equipped for the terrain for a while. Even the trucks you discover in-game are often ill-equipped for off-roading, and you’ll spend at least half your time on dirt roads. You can upgrade your vehicles to deal with tough terrain, but most of that can only be unlocked through completing contracts and getting promoted. Which sometimes requires the upgrades you can’t access yet. It really shines a big ol’ light on the “videogamey-ness” of SnowRunner, which feels at odds with the relaxed, more open nature of the game.

It’s that openness that makes the game so good, though. Even more so when you discover the Scout vehicle, which lets you explore some of the more muddy and even vertical terrain. You see, SnowRunner isn’t just about delivering building supplies (or any kind of supplies, really), you’re often encouraged to check out the scenery and one early example is when you’re challenged to reach two peaks. Using my then-new Scout, I took on the Trials-like trails that snaked their way up each peak, carefully switching between regular and low gears as necessary, giving traction in the muddier and steeper areas. Thankfully, the handling model is just as robust as it was in MudRunner, meaning that difficult journeys are entirely possible with a bit of patience. Trucks are often sluggish, especially with loaded trailers attached, requiring wider turning circles and almost tactical thinking as you try to swing around a corner without scraping your trailer on a signpost or roadside barrier. The smaller, nimbler vehicles are much lighter and you’ll probably find yourself overcompensating, leading to some amusing weaving as you attempt to right yourself. The physics are incredible too, from the realistic suspension to the difference in handling as you churn through mud, or the need to use your winch in tough scenarios, it all feels precisely how you think it should.

The controls have been streamlined, too. Quick winching allows you to attach to the nearest grapple point, be it a tree or another vehicle, and perhaps the best addition is the ability to quickly load and unload your cargo. You can still manually load things if you want, but it’s a nice option to avoid the awkwardness of operating cranes and just get on with your next delivery.

SnowRunner has also had a visual upgrade. MudRunner wasn’t exactly ugly, but this sequel is a real stunner in the lighting department. Driving along a tree-lined road as the sun sets is a beautiful sight to behold, as the light filters through the branches. Driving at night is impressive, with only the powerful headlights of your truck lighting the way, and picking up a surprising amount of detail as leaves and rocks line the roads. Sure, you have to fight the camera sometimes as you navigate the treacherous scenery, but you’ll eventually find a way to work with it, keeping a close eye on all sides of your vehicle.

It’s even had a size upgrade (stop giggling), with three separate locations, each containing multiple maps. Normally, I tend to frown when a game offers overly large maps, but here, I just wondered how I could get to the next Watchtower or which route would be best for my next delivery. Whether you’re carefully driving a big rig to a warehouse on the other side of the map, or taking on vertical challenges in a Scout, it’s just a joy to explore SnowRunner’s expansive environments

SnowRunner has its issues, but its unique brand of truck simulation and off-road adventuring is enough to keep you entertained for hours on end.