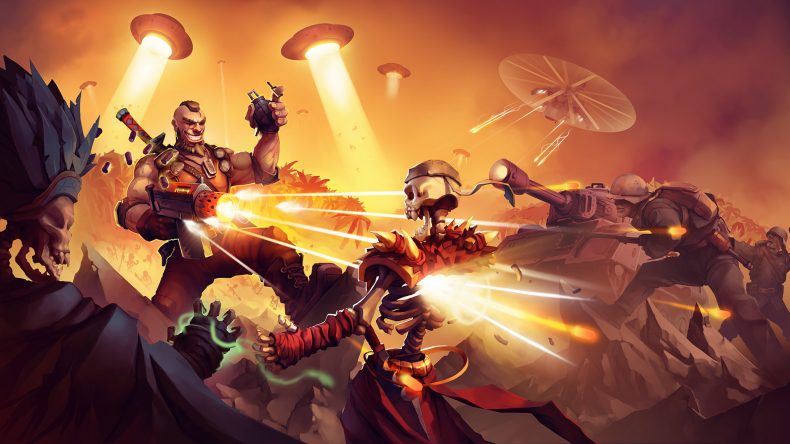 You could be easily forgiven for pigeonholing Fury Unleashed as just another retro-flavoured run and gun affair. But appearances can be deceptive. I was guilty of this my own self, almost immediately dismissing it as a generic romp with slightly odd controls. An hour later, I am struggling to put my Switch down, and feeling the impact of a unique and unexpectedly emotional storyline.

In a genius twist, the roguelike action is framed within the tortured psyche of a struggling comic book artist. You are vicariously filling the blank pages as you go, with each room you encounter and are tasked with clearing of enemies and loot representing a frame in the world of the eponymous action hero Fury. The auteur in question is suffering from writers block, self-doubt, and myriad mental health difficulties, and it is your job as action trope on legs Fury to almost prove to the writer his importance and worth over each of the randomly generated nine-page issues, with the enemies you encounter representing inner demons. I am sure I won’t be the first to bring up the name Comix Zone when writing about Fury Unleashed, but this has definitely got a flavour of the Megadrive classic. The action itself becomes very entertaining, very quickly once you come to terms with the combo system that is its winsome gimmick. Each confirmed kill racks up the combo meter, increases the volume and intensity of the frenetic metal soundtrack, and brings rewards the higher you go. Meeting combination milestones will bring rewards such as life-sustaining orbs and in game currency, both of which you will need as there is super branching RPG skill tree to take advantage of, and the game is tough as old boots with permadeath the norm.

Thankfully you have the tools to exact the bloodthirsty carnage that Fury demands. You can melee, air dash, run, gun and jump to your hearts content, and enjoy a series of random pickups that give buffs, extra abilities like a triple jump or extra speed, and a smorgasbord of different weapons of varying capabilities. You may encounter a NPC that will set you a task to complete for some tasty new gear, likewise you are sometimes offered the chance to lend, and subsequently keep a particular tool once you have greased a set number of foes with it. Because of its roguelike nature, there can be some occasions where you happen upon a badass weapon early doors which can imbalance things a tad, but the game is often so unforgiving that you won’t last for long before something kills you off. The sign of how compulsive Fury Unleashed truly becomes, is that getting killed is actually a good thing, as it means you get to venture out into its world once more, often with a brand new gun to play with, or some additional upgrades to your boy.

This is a title that has been five years in the making, and it is clear that a lot of thought has gone into tweaking and manipulating its system to the product we have now. The roguelike tendencies can throw up some awkward playthroughs but overall it is a joy that richly rewards repeat runs. There are three, expanding to four comics to explore, and a plot that literally has you wanting to turn the next page, and like the very best comic books, far more sophisticated than the stylised art would have you believe. Apart from some at times tiny writing on the Switch handheld, it looks sublime, has riffage for days, and represents an excellent run and gun wormhole to disappear down in these bonkers times.

Small text
Tough difficulty may be too much for some

Apart from some at times tiny writing on the Switch handheld, Fury Unleashed looks sublime, has riffage for days, and represents an excellent run and gun wormhole to disappear down.