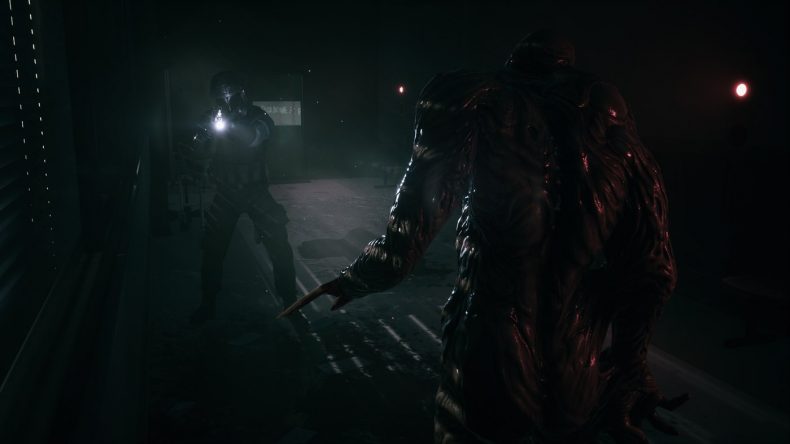 You may have heard of Daymare: 1998. Or its developer at least, as its previous project was an ambitious Resident Evil 2 Remake, before Capcom stepped in with its own remake. It’s brave, then, that Invader Studios is taking on the survival horror behemoth by releasing the console version of its own game, just weeks after the stunning Resident Evil 3 arrived.

Daymare: 1998 was designed as an homage to series like Resident Evil, brought into the modern era using the Unreal Engine. This hasn’t stopped the game having some hilariously bad voice acting, though I’m not entirely sure whether this was an intentional nod to Capcom’s then-infant series, or just because it’s not particularly well written. Or acted. Unfortunately, the voice acting and writing are just a small part of Daymare: 1998’s problems. It has sound issues, it’s unpolished and it has one of the worst inventory systems I have ever seen. Thankfully, it does redeem itself a little through its general gameplay and impressive atmosphere. Just…not enough.

The story begins with a H.A.D.E.S. unit sent in to clean up a biological mess in an Aegis facility, which involves illegal virus development and, shock horror, dead employees rising and fancying a snack on the nearest live human. That’s you, of course. It’s interesting to see this kind of thing up front, especially leading up to the eventual infection of the small town of Keen Sight. This is also where things take a bit of a turn, in the form of a character switch. Having spent the opening as H.A.D.E.S. agent Liev, you’re thrown into the shoes of Sam Walker, a forest ranger totally unaware of the fate of his home. Sitting in a watchtower overlooking Vermillion Forest, his only contact with society being a radio. No smartphones in 1998, after all. His wife tells him to come home quick, but obviously doesn’t give him any other details. I mean, a quick “the town’s full of zombies” wouldn’t have gone amiss, right?

One of the first things I noticed about Daymare: 1998 was its visuals. That may seem obvious, it’s probably the first thing you notice about most games, but considering it’s running on the Unreal Engine, it’s not exactly a looker. Character models are angular and weird to look at, with no real lip-syncing and honestly, would have been average for a PS3 game, so on a PS4 it’s especially jarring. The game’s environments are decent enough, from the forests to the city streets and beyond, but nothing to rival other indie horror titles, let alone anything like Resident Evil. Which then makes it all the more disappointing that Daymare’s framerate is so poor.

The often sub-30fps framerate is also a problem when it comes to the aiming. The aiming itself is always slightly awkward and never fully accurate, which can be problematic when zombies sway and twitch randomly as they move. When the framerate dips, this makes aiming all the more imprecise and when ammo is scarce, it’s just unacceptable. You can’t really avoid zombies either, even the melee attack doesn’t stop their attempts to grab your character, forcing you to mash the action button to pull free. Everything is so slow, too. You can swap weapons using the D-pad, but the animation is excruciating. This might make sense for Sam, but when you’re playing as a trained H.A.D.E.S. operative, it’s ridiculous. Especially when you’re facing down multiple enemies or you’re suddenly thrown into a boss fight. There is even this odd delay between switching weapons and actually being able to aim them.

Then we get into the inventory system. Oh man, the inventory is not fun. For some reason, the only way to manage your belongings is via a screen on your wrist. Checking your inventory doesn’t pause the game either, which makes things incredibly frustrating when you need to manage something and zombies are nearby. You even have to manually reload bullets into magazines, so if you have no spare mags, the only way to reload is to combine bullets with the gun on your wrist computer. Much like the weapon swapping, entering/exiting the inventory is painfully slow too, it’s difficult to see how this wasn’t a problem in testing. Genuinely one of the worst inventory systems I’ve ever seen.

In spite of all its glaring flaws, however, there’s something oddly compelling about Daymare: 1998. Perhaps it’s because I’m a fan of the horror games it attempts to mimic, triggering some nostalgic part of my brain? It certainly wasn’t because of its nonsensical story, which even forces you to go to a website to read half of it, like Destiny’s ill-received Grimoire entries. The files you are able to read there and then, are often poorly-written and ramble on for far too long.

The gameplay itself is similar to the recent Resident Evil remakes, with the over-the-shoulder viewpoint and on-screen prompts for doors and other interactables. It’s a little too similar in places, sometimes feeling more like a fan project than a full-fledged game of its own. This does at least mean that the atmosphere works well, with tension being ramped up in quiet moments, wondering whether that dead body is going to stay there or not. The ambient sound is impressive as well, and combined with some of the sparse lighting in certain areas, it provides some real claustrophobic atmosphere.

Invader Studios has done a decent job on Daymare: 1998, despite its many flaws. Although I had a lot of issues with the way it did most things, it rarely stopped me from wanting to continue playing. Well, except for one very specific moment near the end. The game sets things up nicely at the start, but eventually it falls into the trap of trying to reference too much instead of being its own thing. It has a story that rarely feels coherent, again due to mimicking Resident Evil a few too many times (not to mention the constant character switching), and all of this adds up to a game that has plenty of potential but is lacking in its execution.

Designed as an homage to 90s horror, Daymare: 1998 tries too hard to mimic its inspiration when it should have focused on being its own game.