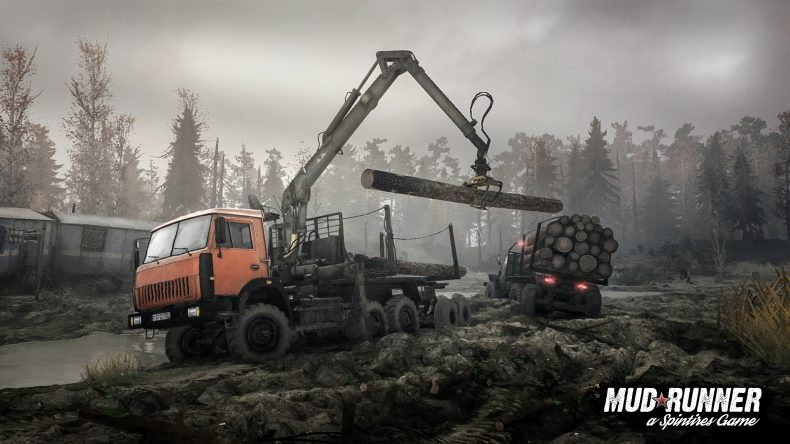 First things first; with a title like Spintires, you might be forgiven for thinking that this is a racing game, had you never heard of it before. It conjures up ideas of wheelspins, which is often attributed to smoking tyres and all that jazz. In this case however, Spintires: Mudrunner is about the literal spinning of tyres in the churning mud of the deep countryside, usually in a large truck of some description, delivering various things (usually logs) from point A to point B.

Wait wait wait, where are you going? This game isn’t anywhere near as boring as I’ve just made it sound. Look, we live in an age where Truck Simulator has become a bit of a cult classic; Mudrunner just takes that idea and replaces the asphalt with dirt roads. While not quite as in-depth as a truck simulator, the physics are very impressive as you fight against the natural environment. You can’t simply step on the loud pedal and expect to go, you have to be a bit more patient and sometimes use the manual gearbox to go between gears and go slowly up a hill, otherwise you’ll just dig your wheels into the earth and you’ll be stuck. You’ll learn how to drive through the tutorial, which walks you through the basics of driving these heavy vehicles in such unconventional conditions. From there, you can jump into the sandbox-like campaign if you like, but you’ll be warned that you might not have learned everything you need to know in order to get fully into it. Instead, you’ll be directed to the new challenge mode. These range from simple deliveries to driving up steep and treacherous hills in a 4×4, or even tracking down a cabin trailer in pitch darkness, in a swamp; they’ll teach you about watchtowers that can reveal undiscovered areas on the map, or about using partial gears like I mentioned earlier, to stop yourself from getting stuck in the mud. Each challenge has bonus objectives for those of you that fancy something a bit tougher; these will vary from level to level, but add an extra layer to the experience.

The actual driving is quite relaxing at times, but the depth is great. It’s not just about the usual going, stopping and changing gears, as you’ll have to think about using the Differential Lock to make sure all the wheels rotate in unison, providing greater traction in the toughest conditions. You have a winch that is sometimes essential, as you attach it to trees in order to pull you out of sticky situations; don’t pull too hard though, you can pull smaller trees down if you aren’t careful! You can switch to other vehicles on the map too, if you’ve discovered them, in a manner not too dissimilar to Driver: San Francisco; you simply teleport into the driving seat of your chosen vehicle and off you go. Seeing where you’re going can be a real pain at times though, should you use the third person view, as the camera is probably one of the worst examples in recent history. It sits off-centre, but it’s so close to your vehicle that you can rarely see where you’re going. At best, fiddling with it a bit can get you a view slightly above the cockpit, allowing you to see something of your journey, but not enough to be optimal. The cockpit camera is great for when you’re moving forward at least, but reversing? Just not possible without the use of the third person view, especially when trailers are involved. While never winning any awards, it’s safe to say that Spintires: Mudrunner is well presented, at least. The trucks are reasonably detailed, down to the customisable frames that can be tailored to suit each task, and they sound just like their real-life counterparts; engines are beefy and have that chugging, diesel-sounding note as you motor along the dirt roads. Wheels dig grooves into the mud as they spin and churn their way through, showing an impressive level of detail in the game’s real-world physics. I’m not sure about the soundtrack, mind, as the guitar riffs of rock and metal blare out seemingly at random. The music isn’t bad, but it’s out of place in such a slow-paced simulation of off-road delivery driving. It’s especially weird when operating a crane, loading logs onto the back of your wagon.

Combining sandbox environments with off-roading usually produces pretty bombastic experiences, so Spintires: Mudrunner’s slow, methodical gameplay won’t be everyone’s cup of tea. Its display of real physics, combined with its almost puzzle-like challenge mode, is very impressive and should still find a fanbase amongst the ranks of truck simulator fans. It offers something a bit different, at the very least.

With its pedestrian pace and delivery objectives, Mudrunner won’t appeal to an awful lot of people, but that doesn’t stop it being a fun and often relaxing experience.