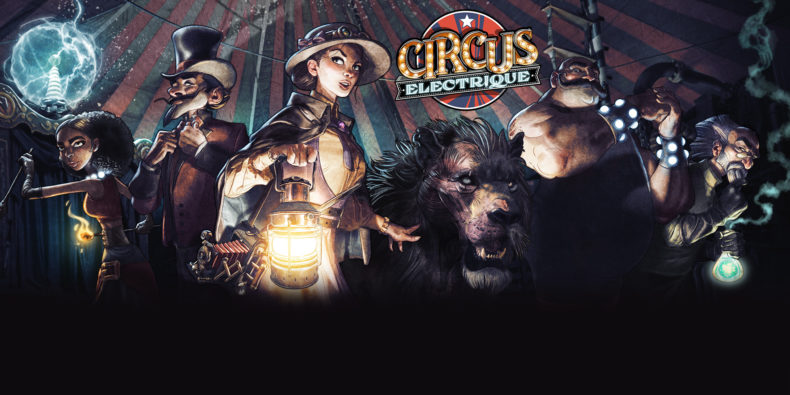 It isn’t easy to make a difficult RPG that doesn’t just frustrate people. The Shin Megami Tensei series has always sat on the tougher end of the spectrum, and with bosses that can wipe out a party in one swift attack it doesn’t always go down well. Darkest Dungeon did a good job balancing out its punishing difficulty back in 2016, and stole the hearts of many an RPG fan. Circus Electrique is looking to do the same this September, with a delightful steampunk circus twist.

In a steampunk version of Victorian London, the titular Circus Electrique runs its shows to the delight of many. One fateful evening however the citizens of London mysteriously lose their inhibitions and become vicious killers. Our hero and ace reporter Amelia is determined to discover why this is happening, and reluctantly accepts the help of her ringmaster uncle to do so. In this preview build I had one goal, to investigate the mysterious disappearance of London Bridge without getting roughed up by pesky brainwashed city folk.

It turns out your uncle’s circus performers are perfect for fighting back against hordes of angry Londoners, thanks to their unique talents. Fire Breathers and Strongmen might seem like obvious candidates for combat, but inflicting status effects with an Escapologist and helping allies with the Clown’s healing power of laughter is incredibly useful too. 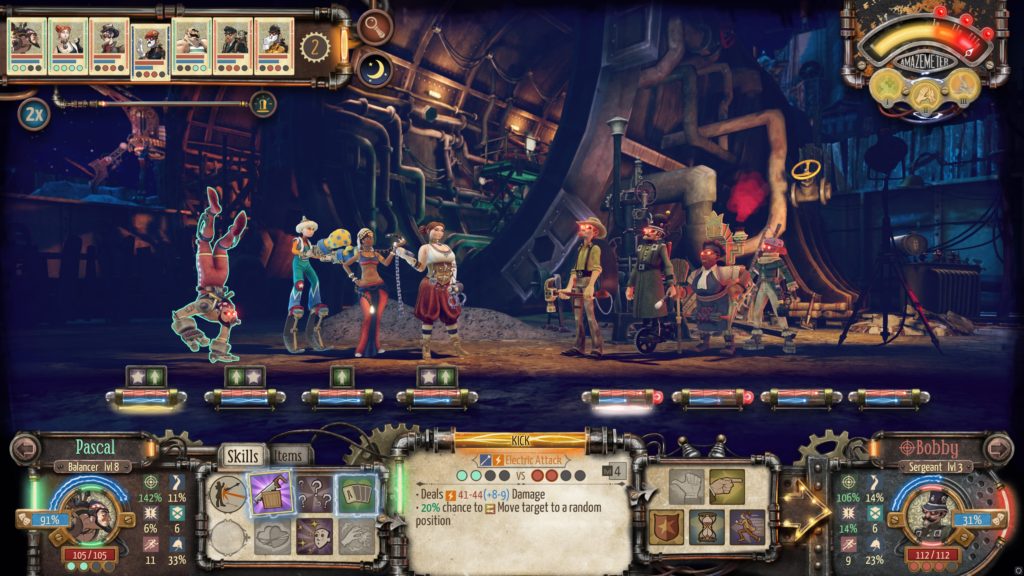 What sets the combat apart in Circus Electrique is the importance of the positioning of your characters. Each character has a set of six moves they can use, but they’ll only work when placed in the correct row of your party. In the front row your Strongman has access to powerful single target attacks, whereas in the third row he can bend his dumbbell into a boomerang and deal damage to everyone. Positioning your team correctly and moving them around mid battle to make the most of their skills is key if you want them to survive the streets of London.

It’s not all about dealing damage though, you also need to worry about devotion. Each party member and enemy has a devotion meter, and different abilities affect it in different ways. Some attacks drain enemy devotion, some cost a bit of yours to use. If you keep your devotion high enough you’ll get some powerful buffs to help you take down a gang of rowdy Londoners, but if it drops you’ll get depressed and at zero will run away from the battle. This counts for the enemy too though, so if you notice a bad guy with a low devotion it might make more sense to make them run instead of beating them to a pulp. 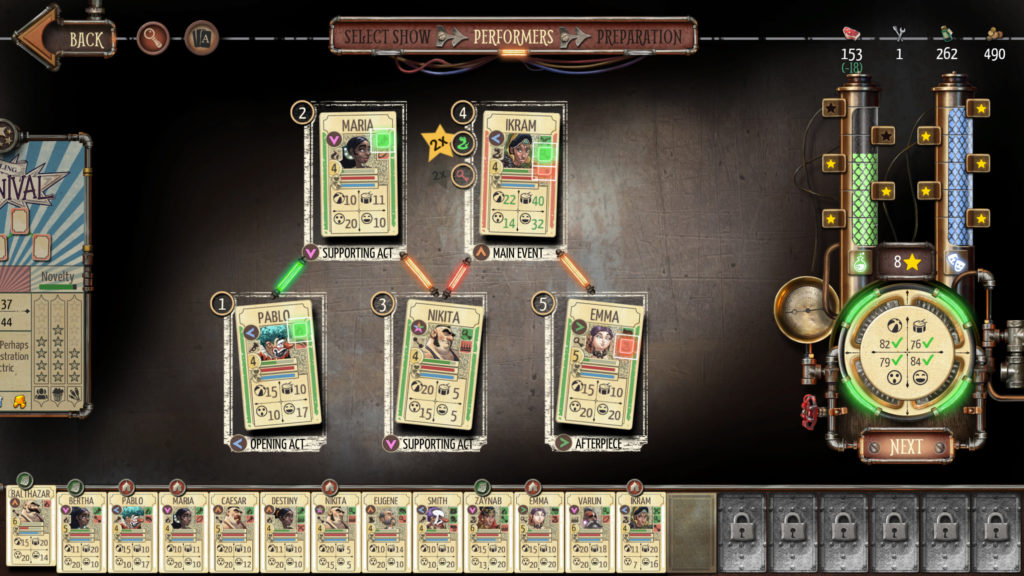 Another reason devotion is important is for running your shows at the circus itself. Between fights you’ll need to go back to the big top and manage the night’s performance. There’s a lot to take into account when organising a show. Each performer has a preference of what position they’d like to go on, while also wanting to perform next to certain acts. Once you’ve made sure to put your fire breather next to your strongman and are happy with the setup, you’ll also be awarded points for each member’s devotion. With enough tinkering around you’ll have the best show in town, and will be rewarded with stars that can give you money and experience for the circus and performers.

By levelling up different parts of your circus you’ll unlock all sorts of different bonuses, as well as plenty of new systems to tinker with. The sleeping car can heal and give devotion to the performers who aren’t out adventuring or in the show. The train car brings in new employees, who will start at a higher level if you level it up. There’s also a crafting tent that can provide you with all sorts of consumables and even equipment to make your shows better. If you haven’t guessed yet Circus Electrique is an incredibly dense game, which makes mastering its systems all the more rewarding. 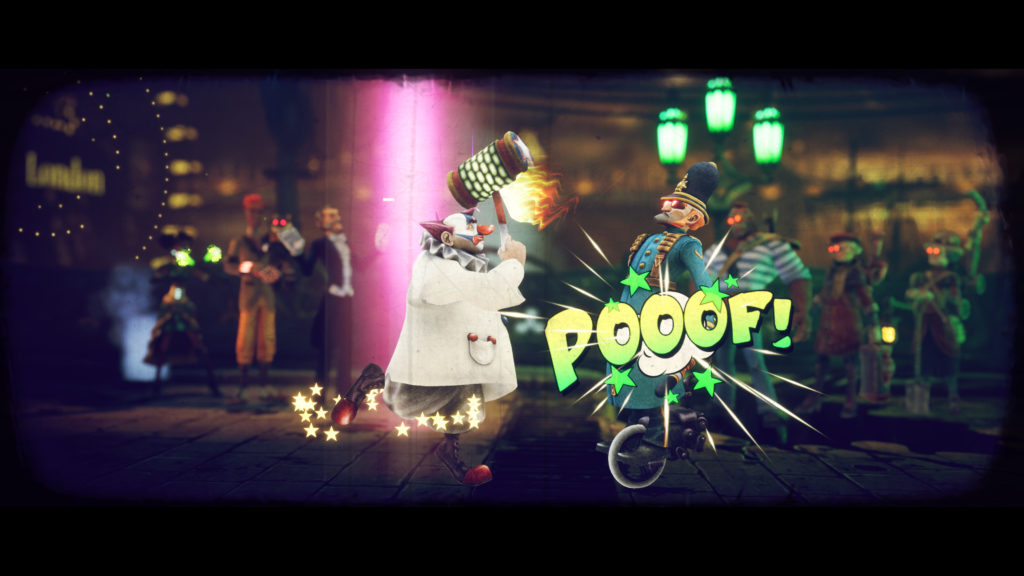 While the show must go on, so must the adventuring – so Amelia and her Circus friends wander the dangerous streets of London in search of the source of these terrible events. You’ll choose your route to your objective by selecting nodes on the map, with each node corresponding to a different event you’ll need to deal with.

One of these events is your standard battle, but there’s also loot crates full of crafting supplies, mystery events where you’ll have to choose an option for optimal rewards, and even a paperboy you can bribe to get good reviews in the newspaper. My favourite though are the street performances, which see crowds gathering to watch your party perform, and with good enough stats and a lucky spin of the wheel you’ll get big rewards for showing off your skills.

Circus Electrique is a deep and complex RPG that veterans of the genre are going to love. I only got to scratch the surface of all the systems in the first chapter of the game, and with weather effects and special moves all waiting in later areas it’s only going to get harder. If you’re willing to put in the time, Circus Electrique has a fantastic theme and is definitely an RPG to look out for next month.