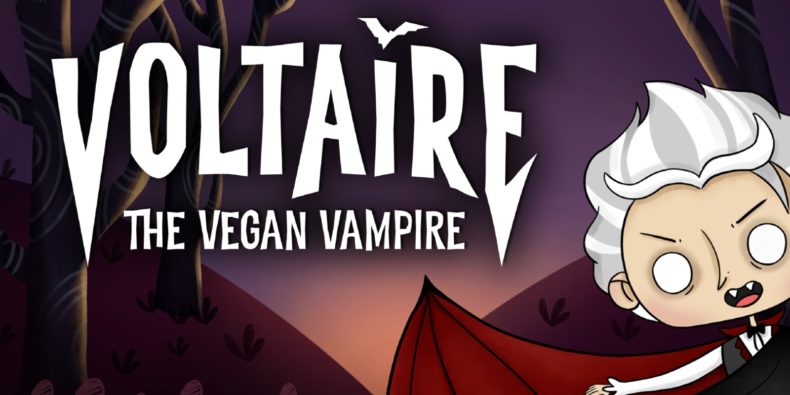 One aesthetic we simply don’t see enough in video games is that of cartoon horror. I love when a video game looks like something you’d see in a Halloween colouring book, but more often than not it’s either vibrant platforming in a sunny meadow or slowly walking through a dingy house. Games like Costume Quest and Luigi’s Mansion have captured that theme perfectly though, and soon Voltaire the Vegan Vampire will join them – and I’ve had chance to play a chunk of it.

Our hero Voltaire has run away from his home of bloodsucking vampires who disagree with his lifestyle choices, and gone to live in the forest. With the help of his uncles Frank and Stein he’s going to try and live off the land and sustain himself with delicious plants, but it won’t be easy. Dracula and the lads won’t allow this vegan diet without a fight, and every night send minions to attack Voltaire’s house and plants. You won’t survive long if you don’t start growing some defences and grub, so get ready for some farming.

The gameplay loop of Voltaire the Vegan Vampire is pretty damn compelling. Every day you need to use your hunger meter as wisely as possible to do some farming, and then at night you need to use your vampiric powers to help keep the baddies at bay. Alongside the combination of crop cultivating and tower defence, there’s also a hefty dose of RPG elements to explore as you attempt to survive night after night of pesky demons knocking on your door. 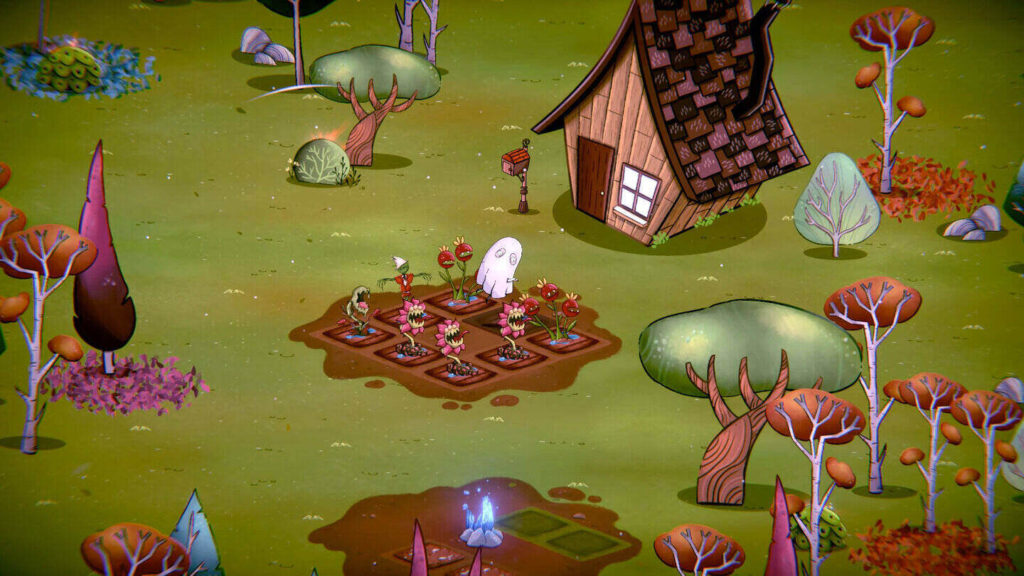 First things first though, you’ll need to follow the advice of your uncles and clear some fields. Pretty much everything you do in the daytime costs you hunger to accomplish, so you’ll need to balance your time and make sure you’re preparing food for future days while also planting some plants that spit fire or goo to help once it’s night time. Thinking long term is always important though, because gathering water from a plant of happy little raindrops and pouring it onto your wilting warriors will fill up your hunger meter too.

Fortunately there are ways to stop your stomach from ruling your life in Voltaire. Crowberries can be harvested daily outside of your farm to mitigate a bit of hunger, and by planting varied crops you can restore bonus hunger thanks to a varied diet. You can also use Blood Shards that you grow or gain from completing quests to acquire some handy buffs that help you with food issues, like making berries restore bonus health or reducing your hunger after a night of well earned rest.

Sleep never lasts that long though, because those ghosts and ghoulies come a knocking without fail every night. Your farm and home is surrounded by walls other than four small gaps where the nasties get in, which are handily near your plots of farmable land. With the help of your plants, you’ll need to use your own offensive powers to dispatch the enemies coming to ruin your meat and dairy free life. Voltaire can use a melee attack and a teleport to help defend his home, as well as laying traps that slow and damage enemies that cross their path. Initially I thought these combat sections felt a little basic, but by leveling up I started to unlock extra abilities like a ranged attack and better traps that really improved it. 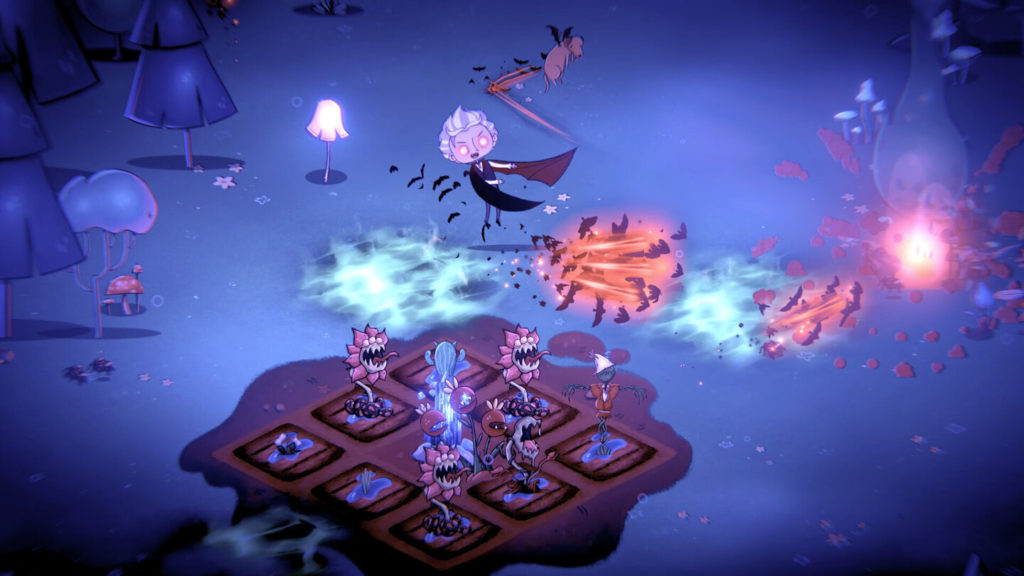 Leveling up only improves your abilities in combat, and when you get enough experience you’re given three options to choose between. There are plenty of ways to get experience whether it’s day or night. At night you’ll simply get closer to the next level by killing demons, but in the day you’ll either need to recycle seeds into the cauldron or complete quests to gain exp. The little side objectives you get from your uncles give you something to aim for each day, be it planting a specific number of crops or building a new well.

I’ve only really scratched the surface of what Voltaire the Vegan Vampire has to offer here. There are different offensive plant types that can be combined together to provide the best protection from demons, big bad boss monsters that spawn at the end of a week and a tentacle in the lake that you can feed mouldy sandwiches for a spin of its prize wheel. This was all in the first week of the game too, with the full game promising different biomes, more enemies and plenty of other surprises further down the line.

Voltaire the Vegan Vampire has all the makings of a fantastic genre fusing game that I will absolutely be playing when it releases fully. The cartoon horror theme is delightful, the farming is compelling and the tower defence gameplay compliments it beautifully. This plant based adventure is really unique, and is one to keep a demonic eye on.