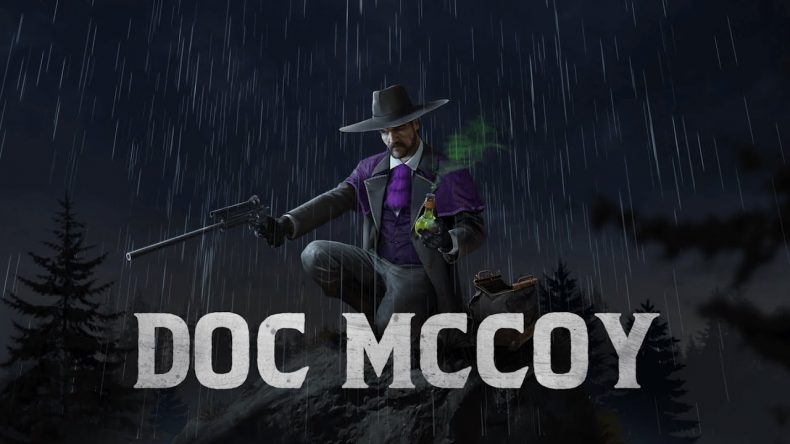 Arthur McCoy, nicknamed “Doc” is your long-ranged specialist in Desperados III. As his nickname suggests, he’s a doctor that can heal your group, as well as concoct potions to use on enemies. But he’s perhaps best known for picking off enemies from afar silently to aid in your progression.

Doc McCoy is unlocked very early on in Desperados III. Cooper encounters him in the Running Late on Payday mission, and the pair team up to make it through the obstructions in front of them.

Doc is weaker than Cooper, and so this affects how he drags bodies about the landscape. He can drag a body, but will remain crouched whilst doing so, which can actually be a benefit to remain hidden. His movement is slow when lumbering a body though, so be aware of guards and their viewcones when dragging bodies. He can only climb ladders and cannot swim, which limits his traversal option in certain levels. Bandages
Being a doctor, McCoy can actually use his medical bandages to heal either himself or a fellow Desperado. It will heal them for two of their health points, which is handy if someone has taken damage. Given Doc plays more stealth than most, it’s more likely to be used to patch up an ally, and will likely be used rarely due to how quickly most gunfights can end up in straight death anyway.

The Doctor’s Bag
Doc McCoy has his own version of a distraction skill, in the form of a Doctor’s Bag. Doc can throw this trap for a radius of up to 5.0 away, and leave it there to distract enemies. If an enemy can be distracted they stare at it once it enters their viewcone. Also, the first regular enemy to spot it will wander over and inspect it. Once they open it, the Bag will briefly blind them, giving you an opportunity to move around unseen. Blinded enemies will also investigate the area afterwards, which you can also use to your advantage. Similar to Cooper’s Throwing Knife, McCoy will need to retrieve his bag to use it again. He can retrieve it whether it has been opened or not. Colt Buntline Special
Doc McCoy’s trademark, the Buntline is a long-range weapon that can instantly kill from afar. It has an absurd 55.0 range, which means the world is your oyster when it comes to this weapon. But not only that, Doc has modified this weapon to be super quiet compared to normal firearms. As such, the noise radius is a manageable 4.5 making it a viable option to consider, especially considering the relatively short death duration of 3.5 seconds. You will have to wait 6 seconds to fire again, but that’s often not too much of a problem.

Your bigger issue will be that the weapon only holds five bullets at a time, and these only replenish at ammo crates. So it is advised to only use this weapon when close-range options are too dangerous, or to clear out a pesky guard from afar that makes taking out the rest easier. Should the Buntline be required for a mission, he will hold onto a Golden Bullet that you can use should you run out of regular ammo.

Poison Vial
Being a master apothecary has also afforded Doc the ability to perfect poisons to use to his advantage. You can throw the Swamp Gas Vial into a group of enemies and it will knock out any within the 3.0 blast radius. It has a decent range of 8.0, meaning there’s plenty of options to use it in the sticky situations you’ll find yourself in. It knocks out regular thugs and Poncho wearers too, but Long Coats will only be briefly stunned before returning to normal, so bear this in mind.

The cooldown of six seconds is not a concern at all, and similar to the Buntline, the issue here is capacity more than anything. You can only hold two vials at any one time, so you’ll have to use them sparingly and effectively to avoid running out too soon. A well-placed vial can make all the difference if it takes out multiple guards at once. Just don’t forget to tie them up before the knock out effect wears off.

In Desperados III, Doc McCoy is clearly a more stealth-focussed, tactical character. Slow and steady progress by incapacitating your enemies is how he operates. He confuses his enemies, and importantly takes them down with minimal fuss and noise. His Buntline is unmatched for distance and is a strong addition to your option out in the field. The Doctor’s Bag is also great for drawing enemies away from their normal patrol, and away from prying eyes, to be taken out safely. Kept out of sight, and used in the right way, Doc can be deadly.