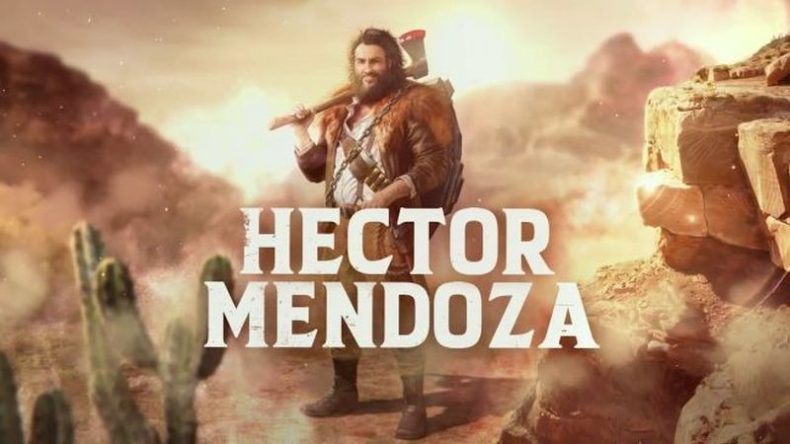 In Desperados III, Hector Mendoza is the muscle of the group. He brings the swagger, brash nature, and wise-cracks to the Desperados III party. His methods are blunt, often loud, but still quite effective in dealing with both individuals and larger groups of guards. Hector is definitely not one to be messed with.

Hector is unlocked at the start of the Troublemakers in Flagstone mission, as he meets Cooper in the local saloon bar. The pair of them then join forces for the rest of the mission.

Hector is a veritable man-mountain, possessing huge strength, as such he can carry two bodies at a time if required. Perfect for quickly clearing areas before other guards return. His strength means he moves pretty quickly despite the burden, but he will remain standing which can mean he gets spotted by watching guards. Similarly to Doc, he can climb ladders, but is unable to swim. Additional Note: Both Hector’s takedown options can deal with Long Coats. Outside of environmental deaths (such as pushing rocks on top of them), this is the only way to deal with them close up.

Bianca
Yes, it’s clear that in Desperados III, Hector loves his iconic Bear Trap so much, he even gave it a name. Bianca can be set anywhere on the ground, and once laid becomes conveniently imperceptible to guards. Any guard that is unfortunate to stumble into it, gets mauled to death in a satisfying clunk of metal on flesh and bone. Bodies captured in Bianca do not need to be hidden, as there’s not enough of a body left to dispose of! It takes just 1.1 seconds to set up and can be done so from crouching, so you can remain hidden in a bush whilst doing so for example.

It has a relatively small noise radius of 2.0, which often isn’t a cause for concern. The death animation of being crushed to death with sprung metal though does take time –  5.4 seconds to be precise. Consider this when choosing where to place it, avoiding other patrolling guards where possible. Bianca will also need to be retrieved after being placed to be used again. Additional Note: On the One Hell of a Night mission, Hector misplaces Bianca, and so needs to improvise. A nearby rake substitutes as Not-Bianca that works in mostly the same way. Think Sideshow Bob in the Simpsons, and you’ll not be far wrong. The only difference, is setting up the rake is quicker at 0.9 seconds, but the noise radius and knockout animation is the same as for Bianca.

Whistle
A simple skill on its own, Hector puts his dulcet tones to good use, by loudly whistling which will cause distractable guards to wander curiously to the source of the noise. The radius is a decent 10.0, so it can be used from distance, often from where Hector can hide. For some reason – chapped lips presumably – Hector has a cooldown on whistling of 6 seconds. So, you can’t use it freely to continuously distract. This is a small issue though, because most often your distractions will be intentional and calculated, meaning 6 seconds will be plenty of time before you need to use it again. As is likely obvious, the Whistle is best incorporated with Bianca, to force a sneak kill. If you set Bianca, and then Whistle, a guard will inadvertently wander into its spiky jaws. 100% cool, 100% satisfying.

The Good Stuff
Hector always carries a hip flask containing his own special blend of alcohol. Taking a sip from it fully heals Hector, irrespective of how much damage he has taken. Unfortunately given that this liquor is too strong for any of the other characters, only Hector can be healed by The Good Stuff. There’s a cooldown of 20 seconds to consider as well before another use, so use it wisely. Even Hector needs to take a moment to recover from its side effects. Sawed-Off Shotgun
It seems quite fitting to Hector’s character that he doesn’t just carry an ordinary pistol firearm. No instead he opts for a Sawed-Off Shotgun that damages all enemies in a cone direction from where he is facing. Its range is decent (for a shotgun) at 12.0 but unsurprisingly has a large noise radius of 18.0, meaning it will alert many nearby guards if used. It only has four bullets in the chamber, so less than most other weapons, and takes 18 seconds to cool down and be used again. The dying duration is also quite long at 5.1 seconds, so consider this when using it, especially given it is likely other guards will be alerted by the noise. This is a great option for dealing with small isolated crowds, but don’t be thinking you can sustain a firefight with this, given its small capacity and long cooldown.

Clearly, in Desperados III Hector is no shrinking violet, and that’s is further evidenced by his skills and abilities in the field. Bianca and the Sawed-Off Shotgun are brash, but still useful if used correctly. The Whistle is an excellent and controlled distraction choice, that means Hector can still sneakily take down enemies if he needs to. The Good Stuff keeps him alive if he gets into a scrape, and so more often than not Hector is a solid choice for most situations. His ability to deal with long Coats should also not be underestimated.