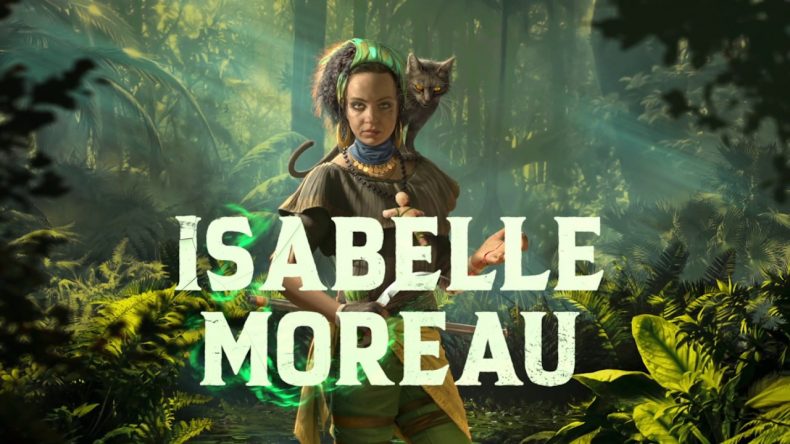 Bringing a touch of the supernatural to Desperados III, Isabelle Moreau is a master of voodoo, which gives her plenty of unique options to distract, control and destroy any enemies that would dare stand in her way.

Isabelle Moreau is the final character you unlock in Desperados III. She becomes a playable character from the start of the Louisiana Voodoo mission.

Isabelle resembles John Cooper in the passive ability stakes. She also can carry a body standing, and moves at a normal pace whilst doing so. She can also climb ladders, ropes, and ivy to get to higher ground. Her ability to swim comes in really handy straight away as you’ll encounter water in the Louisiana Voodoo mission you unlock her in. Mind Control
Perhaps her signature move in Desperados III, Isabelle can perform her voodoo arts to actually possess the mind of an enemy. The art has its restrictions though, the first of which is that Isabelle must wound herself to cast the voodoo spell, and so loses one health every time she performs it. The other key restriction is you are limited to only three uses in a single mission, irrespective of Isabelle’s health. But with those conditions met, the fun can commence. You can aim the mind control dart at an enemy within a 10.0 range. You have to be able to see them without obstruction, so bear this in mind. Once they are under your spell, they can wander within a radius of 35.0. Should they leave this area, or perform a skill for you, the mind control will end.

Mind Control Gunshot
Once under the influence of your Mind Control, you can really start having fun with this additional skill. You can command the guard to actually kill another with a gun. The great thing is this action doesn’t raise the general alarm. If your controlled guard is spotted attempting the kill, they will be killed themselves, and branded a traitor. Guards may be on alert but they won’t suspect you. If you manage to execute the kill successfully, your mind control will wear off. So make sure you’re prepared to deal with them yourself. Jimson Weed
Isabelle is also a decent herbalist, and as such can use her stash of Jimson Weed to craft medicine to use on either herself on an ally. It heals one health, which is handy, but does have a 10 second cooldown period so it can’t really be used as a fast-paced healing technique. The good news is, Isabelle’s pockets must be deep because she has an unlimited supply of Jimson should she need to use it, so don’t be cautious if someone needs healing. You may have already realised but this ability works perfectly hand in hand with Mind Control to heal any damage Isabelle had inflicted on herself in the name of Voodoo. So remember to use this when you are hidden to top up her health.

Connect
Using her dark arts, Isabelle can actually connect two enemies together. This means what happens to one, ends up happening to the other. To begin the connection, use the skill dart on an enemy, to see the green connection symbol appear above their head. Then repeat this on another guard, until you see two symbols. These two guards are now connected, and will suffer the same fate. So now, for example, if you take down one, the other will also be taken down in the same manner at the same time. This is a great way to deal with enemies that are watching each other because neither will have the chance to raise the alarm as they are dealt with simultaneously. If you want to disconnect a guard, simply fire another dart at them, and the connection symbol should disappear. Stella
Even animals are getting in on the act now, as Isabelle’s faithful feline friend Stella helps out as a useful distraction technique. With a decent range of 14.0, Isabelle can direct Stella to go and distract a guard. She will then dutifully run up in front of them, causing them to fawn over her for a few seconds, and have a static and reduced viewcone. It lasts for 6 seconds which is plenty of time to scamper past or to sneak up behind them and take them down whilst they’re too busy petting the cat. Stella will then run off, available to use again straight away without the need for retrieval, which is really handy.

By the time you reach her in Desperados III, Isabelle feels like a breath of fresh air. Whilst all the other characters, certainly the men, feel like they control in quite a similar way, Isabelle’s skills are so unique that it throws up some genuinely fun experimental options. You’ll have plenty of fun trying different ways to control and connect the enemy. So much so, that you won’t even mind the lack of a long-range weapon. On her own, she’s a formidable opponent, but as part of a wider Desperados party, she offers up a different approach to most. She can also provide distraction and healing support to other allies, which makes her a valuable asset.