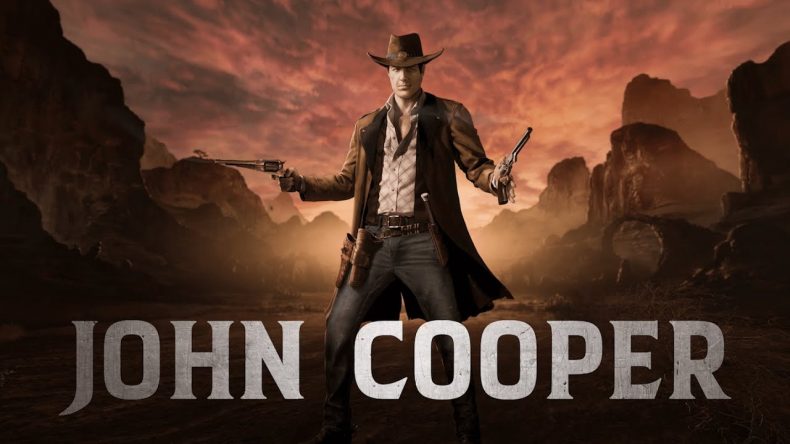 John Cooper is the leader of your pack of Desperados throughout Desperados III. He’s a wandering bounty hunter who, on his quest to flush out the mysterious Frank, gets caught up in plenty of other adventures along the way.

John is unlocked from the very beginning, and you’ll play as a younger version of him in the game’s opening tutorial level, Once Upon a Time.

Cooper is quite strong, and so can carry a body slung over his body and remain standing. His movement with a body is fairly quick, should you need to move rapidly to get to a bush to dispose of it. He is a good climber, and so can use ladders, growing ivy and ropes to climb up vertical obstacles. Cooper is also able to swim, which will come in handy in later levels. Coin Toss
Cooper has a seemingly endless supply of fake coins in his pockets. He can toss one to distract a guard for a brief period. There’s a range to how far you can throw coins from your position, and as you aim your shot, a blue circle appears around the target area. This circle is the audible range of the coin, so make sure the guard you are looking to distract is within this circle. On tossing the coin, the guard will look towards the centre point where the coin landed. Use this moment of distraction to move around undetected.

Throwing Knife
Cooper can also use his trusty knife as a long-range projectile. He can fire it at foes from afar to take them down from distance. Unlike his seemingly endless supply of coins, Cooper only travels with one knife. Therefore after every throw, he will need to retrieve it again from wherever it landed in the environment. It has a decent range of 12.0, and whilst it is quieter than a gunshot, the noise radius of the dying guard carries to a distance of 6.0 (notified again by the blue circle). Being stabbed is a fairly long death at 4.4 seconds, so make sure there are no guards returning to the area who could stumble on them as they die. Revolvers
Cooper also carries a couple of Revolvers with him for less stealthier moments. Shooting is a much louder alternative to sneak kills or the coin toss, but also much more flexible than your single throwing knife. A wider range than the knife of 17.0 means you pick enemies off from further away, but the noise of your shot has a radius of 18.0. This means you’ll more than likely be alerting other enemies, so you should use it with caution.

Dying takes 5.1 seconds, which is long, but the noise generation is likely your bigger concern. You only have 8 bullets too, so be careful how frequently you use them. You can refill bullets with ammo crates, dotted throughout the map if needed. In Showdown Mode, Cooper can shoot both his revolvers at once, taking out double the enemy threat, but making twice as much noise, so use it with caution.

John Cooper feels like a good all-rounder, and understandably is the first character you use to get a feel for how Desperados III plays. His combination of solid distraction and takedown moves means he can deal with a variety of situations. The revolvers are a good last resort, but often you’ll be utilising his stealthier options and Throwing Knife to move through the field unseen and with very little aggro. His moves and associated tactics are probably the most basic, paving the way for other characters and their flashier alternatives. Despite this, he’s still a reliable team member in most situations.