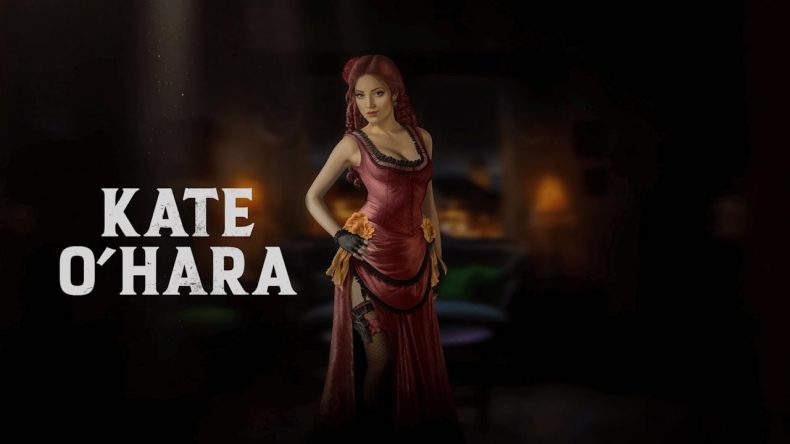 In Desperados III, Kate O’Hara is the seductive would-be bride of Mayor Higgins that has more about her than initially meets the eye. She can use disguises and her good looks to cause significant distractions. She’s not just a pretty face, as she also has some deadly tricks up her sleeve for those who get on the wrong side of her.

Kate first appears in the Until Death Do Us Part mission where she is about to marry Mayor Higgins before things soon unravel, and see her story intertwined with the other Desperados.

Kate’s physique puts her on par with Doc McCoy, with her lower upper body strength meaning she struggles to lift dead bodies. As such she drags them slowly while crouched as she makes her way to dispose of them. Like Doc, this can be a benefit given the cover that crouching can often provide. She can climb ladders to get around, but cannot swim. Perfume Vial
A lady doesn’t go anywhere without her perfume, and in Desperados III, Kate O’Hara is no exception. Her Perfume Vial though has a much more interesting use rather than just a pleasant olfactive. When thrown, it will make enemies in the vicinity sneeze, and temporarily blind them. Enemies will be blinded for four seconds, giving you a brief moment to take advantage. It has a decent throwing range of 12.0 but you will need to be precise as the radius of the perfume cloud is only 2.0. Kate has an unlimited supply of perfume, but you will have to wait 10 seconds between each use.

Disguise
Within certain levels, Kate will find the opportunity to don a disguise to try and fool the nearby guards. Whilst wearing a disguise, Kate can walk around freely and not be bothered by either regular thugs or Ponchos. Remember though, that Long Coats and Guard Dogs will see through her disguise, so you will still need to be careful in certain parts of a level even when Kate is in disguise. This ambivalence from guards can also be taken one step further. Kate can approach these guards and flirt with them to permanently distract them. This distraction will last as long as the flirt itself, forcing guards to follow Kate or keep their gaze in a certain direction. This is particularly useful to allow other characters room to move around without being spotted. Derringer
Kate’s only real weapon is her concealed Derringer firearm. It means Kate can still be useful from afar, but don’t get carried away. The relatively short range of 9.0 of the Derringer is a bit of a black mark. A big plus point though is that it is a very quiet weapon, only generating a noise radius of 3.0, making it a viable option if enemies are in range. Being a small weapon, it has a small chamber of five bullets. It is replenished like all weapons, at scarce ammo crates within certain levels. It has a cooldown of 6 seconds and death animation of 5.1 seconds which are fairly standard, making this weapon pretty handy.

As an individual, you could be forgiven for thinking that Kate O’Hara is a poor character. She doesn’t have a lethal takedown move, she only has three skills, and one of them requires you to find it in the level first (Disguise). And if Kate was the only character in the game, Desperados III would certainly be a poorer title. However, with the right considerations, Kate is one of the best on the roster, but really only when used as part of a team. She is a master of distraction, and her ability to flirt with guards makes her a key asset to allow other characters to move around unseen.

The fact it doesn’t have a time limit also gives you the breathing space to plan your next move. Donning a disguise can also be a great way of scouting out the area with a character first. Her Derringer gun is also handy given how quiet it is, and the Perfume Vial means she still has options in a pinch or as a support in Showdown Mode. There’s certainly more to Kate than meets the eye. She’s definitely an invaluable part of the Desperados III team.